I did a book signing yesterday at Malaprop's in Asheville and was especially delighted by two folks who stopped by my table. One was Nancy M., who some time back shared the diaries of her two aunts who lived in Walnut (the original of Elizabeth's Dewell Hill), as well as some wonderful pictures.

Nancy brought me some more pictures and other memorabilia which I'll make into a web album later. Just for now, I'll post these four pictures that particularly appealed to me.

This first one, from Christmas 1957, is Nancy and her Grandma . I adore the saddle shoes and bobby sox, as well as the typical teenage look of boredom. 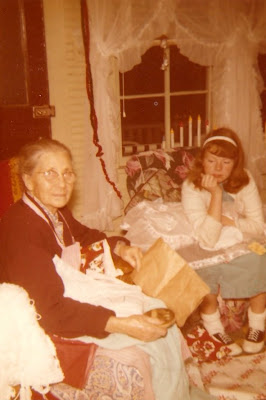 Grandma with her chickens -- don't know if the child is Nancy or someone else, but Grandma and her dress and apron is just the sort of country woman I like to write about. 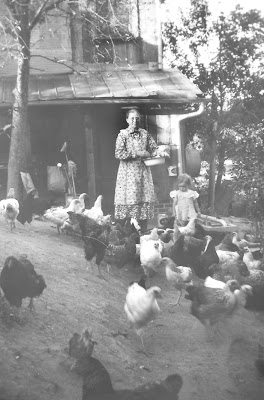 And here is Nancy's grandfather with recently cut tobacco on sticks ready for hanging. Again, I'm not sure if the cute little girl is Nancy but I suspect it is. 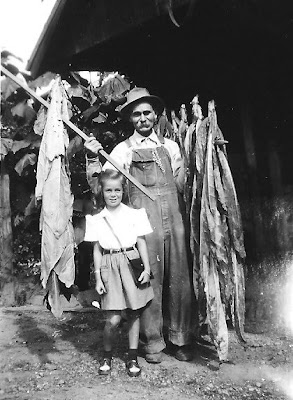 And a baptising -- possibly in the French Broad, possibly a nearby creek. 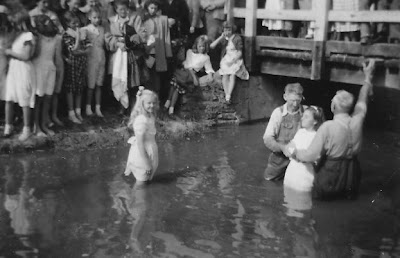 As always, these old pictures really help to bring the past alive for me. A reader, stopping by the table to say hi, took a look at a few of these old photos and said, 'Why, these are the people
you write about!"

Another welcome visitor was Larry Suttles -- who won in a raffle, the chance to name a character in Dark Season. As I noted in the acknowledgments of that book, Larry asked that I use the name of his late father, James Suttles. The little he told me about his father inspired the figure of the mystical, perhaps eternal, figure that Elizabeth encounters up on Max Patch.

Larry was very pleased with the character I dreamed up to carry his father's name. And I was delighted to hear that he was pleased. I'm very fond of that character and plan to bring him back in a later book.
at December 14, 2008

I looked closely at the photo of the baptism to see if I recognized anyone in the crowd. My dad could be Nancy's age, and was baptized in Bear Creek. I'm sending him the link.

Ooooh, I love old pictures ... that is so neat and how nice of Nancy to share!

Vicki, what a treat to see those wonderful pictures this morning. That is me with my Grandma but not Grandma Becky - Granny Becky was my great-grandmother. They do look a lot alike - same type of hairstyle, clothing. And that's my older sister, Judie, with Grandaddy. I told my brother about the pictures and he told me that he has Grandaddy's old pocket watch and wants to make a display with the watch and one of Grandaddy's picture with his overalls on (which is just about all the pictures!!!). We use to complain about Aunt Odessa and her "brownie" camera but now I'm so glad that she took pictures.

It was good seeing you at Malaprops on Saturday - it was certainly busy in there and I always enjoy going.

I was afraid I hadn't gotten that straight -- I'll have to get with you before I post the album -- it'll be a good bit later, maybe January.