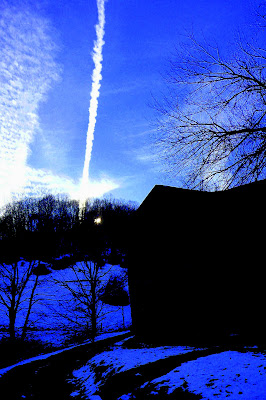 As we came up the road the other day, this amazing con trail just next to the sun caught my eye. My first thought was that it looked like the sun was sending out a giant flare but by the time we stopped and I hopped out to take the picture, the winds had shifted the con trail to the left so that the picture looks to me as if the sun is a warrior wielding a giant lance.

It was only about 1:30 but at this time of year the sun is so low in the south that it spends much of the day scuttling along behind the trees on the ridge line.

All of which has nothing to do with the exciting news I received last night from my editor. In A Dark Season is a Romantic Times nominee for Best Mystery and Suspense Novel of 2008 in the category of Contemporary Mystery. Here's the list ~

Fantastic news Vicki! We could form a conga line and all join in- way to go!

Oh my gosh! That is exciting! By the way, in my opinion, In A Dark Season beats the new E. Peters book all to pieces and she is one of my all time favorites. :-) I saw an amazing sight last night to. Almost wrecked my truck trying to get a picture on the way home --the sun was near setting and there was a cloud formation around it, with a clear area in the center. From cloud to cloud and through the open center was a shaft of light, but it was multi colored like a rainbow or sundog. Very cool.
Tammy

So many pretty skies anymore, day or night. Your pictures are always so nice and hope Tammy shares hers on her blog.

Thank you, all of you! I've been grinning all day!

So, Tammy, did you get a photo of that rainbow, cloud, sun event?

Congratulations, Vicki. Fine company to be in. My guess is that being in such fine company will make the win all the sweeter when it comes. We'll look forward to it! Glad to hear that Ethan is home, major relief.

My, aren't you in rare company? Now, don't you go getting the big head! Congratulations, ma'am, congratulations.

Thank you, thank you, but I'm not holding my breath. (It's an honor just to be nominated and all that . . .) Besides, winners aren't announced till April.

Have enjoyed all the books and eagerly await Miss Birdie's story.

Enjoy your blog and the lovely photos. Helps to make my dat.

Oops - of course that last word was day...never pays to rush does it?

Yeah, it would be nice to have an EDIT feature for the comments. I've messed up more times that I care to recall.