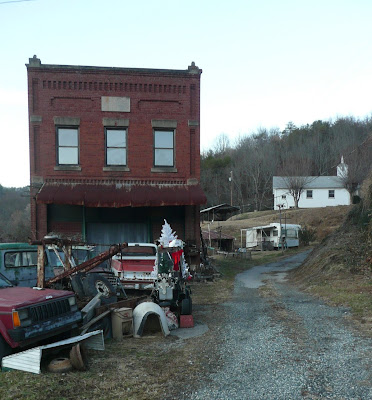 The doctors have been cautiously optimistic -- Ethan's vital signs are good, except for the heart rate -- too fast but it's improving. He's off oxygen and now it's going to be a matter of figuring out the blood thinner medication, which he may be on indefinitely. The clots will be reabsorbed in the course of time -- a long time -- up to six months for the ones in the lungs. The blood thinner doesn't have any effect on them; it's just to insure that more don't occur.

He will probably be coming home later today, And that's what I know about that. Except to note that doctors are sure young these days. And so many are of the female persuasion. Pretty cool.

Many thanks to all of you for your concern, prayers, thoughts, etc. It's a nice feeling -- that invisible network of support. I love this Christmas display set up by the fellow who lives in the trailer back of this brick building. At night he ties a dog to the doghouse to deter vandals. 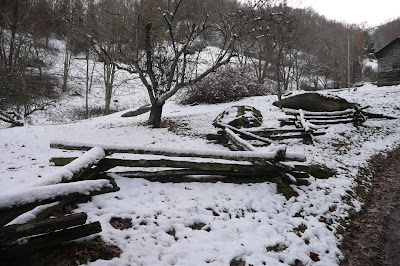 Speaking of vandals -- when the EMS came for Ethan, they had trouble finding our road because the sign had been removed. I imagine there was no malice intended -- just thoughtlessness. But in some situations, that fifteen minute delay could have meant the difference between life and death. 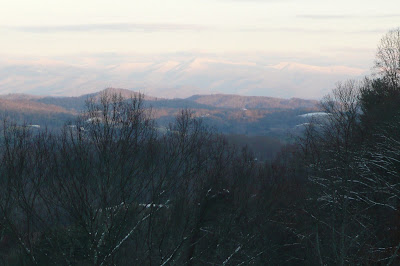 Email ThisBlogThis!Share to TwitterShare to FacebookShare to Pinterest
Labels: giving thanks

I'm really glad that Ethan's prognosis is positive. I'll continue to keep him, and your whole family, in my prayers.

Re: road sign theft: that happens in my parents' part of Marshall all the time. My uncle finally sunk his street's sign posts in concrete to keep them from getting knocked over -- but the signs themselves still disappear occasionally. Dad says it's just kids who are bored.

Which church is in the background of that photo? I know a lot of churches in the area have similar architecture, but it looks familiar.

A week of Thanksgiving indeed!So glad for the report and it does sound like a good one!
I was reading the post to Eric and when I got to the part about the female Doctors', he said; "And usually smarter". Again I'm reminded of why I married this man!
HE REALLY GETS IT! Thoughts and prayers continue!

Esta -- the church is at Barnard , right near the bridge over the French Broad. I think it's the Barnard Freewill Baptist church but am not sure -- will pay better attention next time I pass by.

And to you and to Carol, many thanks for the prayers.

I love that spot by the Barnard bridge - isn't the house that's Gudger's Stand there, too? I can see why it inspired you - so much history in those old buildings. Glad to hear Ethan is improving - it doesn't matter how old they are - they are still your baby boys when they are sick.

Thanks for the update and thoughts and prayers are still with you and yours. Yes, road signs seem to disappear constantly and guess those folks don't realize what a hazard they're creating.

Vicki and John.........I'm late to this news, but know that my prayers will be up there with all the others. What anguish to see a child brought low...not fair...as life often is not. Your strong family is the best tonic beyond blood thinners that he could have!
Susan T.

I also have you in my thoughts
and prayers. As the mother of
an only,a boy(actually a man
now),I can only imagine what you
have been going through. It sounds
as if the worse is over. This
season is truly a time of miracles!!

Vicki, wonderful news about Ethan. You all will be in my thoughts and prayers.

Loved the picture of the old building at Barnard. Is it possible that was a store at one time? I haven't forgotten about those pictures I was going to get for you of the store at Walnut and pictures of Barnard. Just takes getting up with my brother and digging through thousands of pictures - which I love doing!!!

Ethan is home as of late yesterday! Thanks again for your thoughts and prayers!

Liz, yes, the old house that inspired my Gudger's Stand is to the right and uphill from the brick building. (The brick building was built by a Gudger and his name is on a plaque up high, along with a date.)

Nancy, I presume that the brick building was a general store of some sort but don't know for sure. In IN A DARK SEASON, I made it have that history and put The Troll in it.