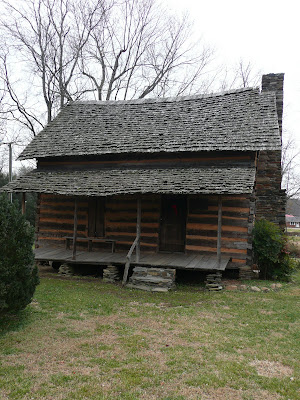 The Stepp and the Morgan cabins at the Mountain Gateway Museum in Old Fort, NC were deconstructed and removed from their original sites and reassembled at the museum.

These are the real thing, the simple, small log cabins that are emblematic of the Appalachians. A settler with little more than an ax to fell the trees and notch the logs could put up a shelter single handed -- if he stuck to small diameter logs. There was wood in plenty and fields to be cleared. The same trees provided the wooden shakes or shingles for roofing and wood to shutter the few windows. And the land supplied the rocks for the chimney, the clay for the chinking. 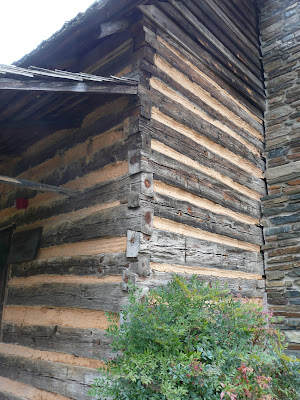 These modest shelters, often one room with a sleeping/storage loft, are a far cry from some of the log homes that go up today -- massive structures with soaring ceilings, many windows, thousands of square feet of living space, exercise rooms, media rooms, bedrooms and more bedrooms. 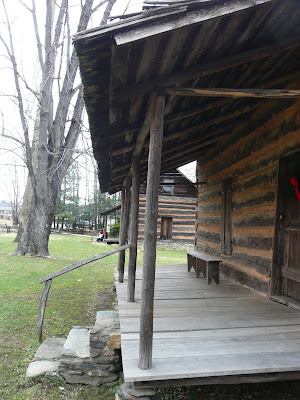 I think of the log cabin on on our property -- Little Sylvie's cabin. It's smaller than these-- originally one room, no loft. At some point a partition was added to make a second room just large enough for a bed. About the same time, a small frame addition was built on to accommodate a kitchen -- before that, the cooking would likely have been done in the fireplace.

And in this house, Clifford and Louise raised four sons; in this house, as Louise told the story, one memorable Decoration Day, she fed Sunday dinner to some forty people in shifts. I imagine them crowding the porches and swarming in and out of the little house, gobbling up a garden's worth of beans, pone after pone of cornbread, sausage and sidemeat, maybe a stack cake, possibly two -- Louise knew there would be company coming but was surprised at the number -- sweet milk and buttermilk till there was none left in the spring box . . .

You can cram a lot of living into a small space. 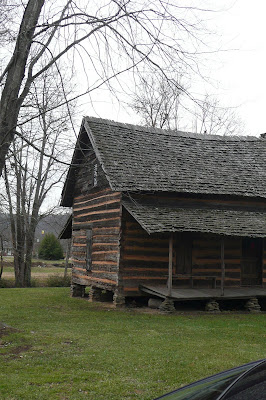 I love old log cabins and you had some beautiful pictures to show. Neat story about Louise and her guests too ... whew, 40 some people, even in shifts, I'd be stressin'!

We are so stuck on the idea of having to have huge homes now-a-days. I moved around a lot as a kid, and we usually lived in small trailers. (Not "mobile homes." These were trailers.) Sometimes, Mom and I even lived in one bedroom apartments and had to share a room. Or houses with little heat and shared a bed with the only electric blanket during the winter. Not quite the same as those who lived in the tiny log cabins, but how many kids today would even really understand how that is?

I really enjoyed this post. People were so tough and hardy and just did what they needed to do. Around here there were fewer log cabins, but lots of one room 'shacks' made out of milled lumber off their land. We had a neighbor when I was a kid, named Sarey Jenkins (I'm sure it was Sara, but....). She lived in a one room shack, with a large bed that went wall to wall on one end, a tiny kitchen on the other end, and a chair, table and a few other bits of furniture in between. Neat as a pin and so comfortable. She 'adopted' my brother and he helped her out with some of the heavier chores.
Tammy

Oh, Good Morning, Merry Christmas and a Blessed 2009 to you! I haven't emailed you in awhile (things in Texas are crazy), but have been reading your blog faithfully. It makes me feel that you are a friend as well as an author that I admire! Would love to have a log cabin in New Mexico when my husband and I retire, but with the economy doing what it's doing, our 401k accounts have taking a "whuppin'". This is a great story about Louise. The closest I've ever come to something like that was my daughter's first year at the University of Texas in Austin. She was working at Barnes & Noble, and she had to work the day after Thanksgiving, so couldn't come home. So, off to Austin I go, and ended up cooking Thanksgiving Dinner for 19 people in her 1 bedroom - 650 SF apartment. It was one of my best Thanksgivings ever!
I hope your son is doing well - you and your family (including the four-legged members)are, and will remain, in my prayers. Take care.

When John and I were first married, we lived in a tiny Airstream-type trailer at Camp Geiger in Jacksonville, NC -- part of Camp Lejeune. In a burst of honesty, the Marine Corps called it sub-standard housing and so it was but it was just fine -- kind of like living on a boat. You learned to be tidy, that's for sure.

Small world, Vicki. I went to high school in Jacksonville (White Oak High), and in the late 80's worked in the messhall on Camp Geiger (civilian contract worker).

Small, indeed -- but I missed you by quite a few years. We were at Geiger Trailer Park in 1964 then we moved up to an actual House in Midway Park -- all of which are probably much changed by now. Still -- pretty neat.

Well, I enjoyed that. Always been curious about Old Fort. I sure wish the road from Black Mountain was still in service.

Vicki - Yeah, a few years before. BTW: I lived in Midway Park for a bit while in high school as well. In a trailer park there. Collins Estates I think it was called. (Love how they give those places "classy" type names...Estates and such.)

Just wanted to stop by and say that I think you are very talented and I am so happy for you that things are falling into place. Your blog are soooo fun. Thanks for sharing.

Thank you so much, Susan! Falling into place? Do you know something I don't?