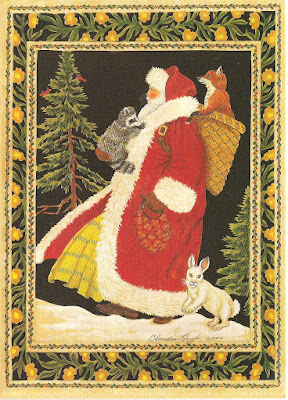 I've always loved the idea of Santa Claus -- though these days I kind of prefer the Father Christmas image to the jolly fat man of the Fifties. But whether you call him Santa, Father Christmas, or Saint Nicholas, he embodies the warmth and open-handed generosity of the season. 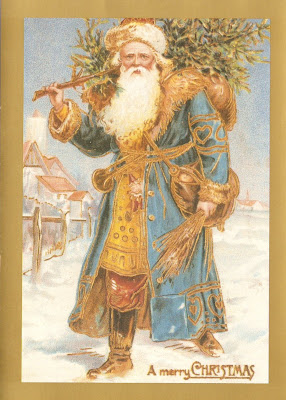 I feel sorry for children whose parents choose not to play the Santa Claus game. I remember putting out the plate of cookies, going to bed, and lying awake, listening for the sound of sleigh bells. Magic was definitely in the air . . .

When my boys were little, we played the same game -- with the addition of letters written to Santa weeks ahead and burned in the fireplace so that the spirit of the letter would magically rise up and make its way to the North Pole. On Christmas Eve, there would be hay and carrots for the reindeer in addition to the cookies. And always a little note from Santa in the morning, thanking the boys for the nice snack.

It was evidently the note that eventually awakened the boys to reality. "We noticed," said Ethan, "that Santa and the Easter Bunny and the Tooth Fairy all had the same handwriting." 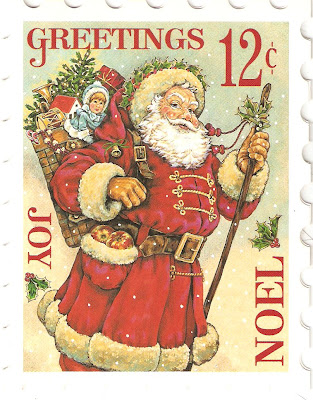 Yesterday I was in my work room and John called up the stairs to tell me to look out the window. It was growing dark but the sun was sending a shaft of light sideways along the valley, illuminating the folds and contours of the hills. I just kept taking pictures till the light faded away -- the sky is really pretty too, in a very subtle way. I put the pictures into a web album you can check out if you like.

Beautiful pictures! I used to dread winter... thought it was bleak and dreary. But I've come to appreciate winter sunsets and, especially, tree silhouettes. I kind of miss them when they're covered up with all that summer greenery.

I'm afraid Santa is nearing the end of his run at our house. I heard some very heated debates about him at school last week!

Merry Christmas to you and yours, Vicki! I hope Ethan is doing well.

Better get back to the kitchen...

And I heard him exclaim as he drove out of sight..."Merry Christmas to all, and to all a GOOD NIGHT". Our family tradition also included the cookies and eggnog for Santa, as well as carrots for the reindeer. On Christmas Eve, my father recited, with the children around him, Twas the Night Before...well, you know.
Merry Christmas to you all.......y'all!

The Santa image most know now got popularized through a Harper's Bazaar illustration and one done for the Coca-Cola company. As much as I liked that one as a kid, I too now gravitate toward the Father Christmas image. I like how he's often shown with animals and such, like he's a part of nature itself.

And a Merry Christmas back to you all!

I still have packages to wrap and clever (maybe) riddle tags to invent. (That part of Elizabeth's Christmas in DARK SEASON is taken from our tradition.)