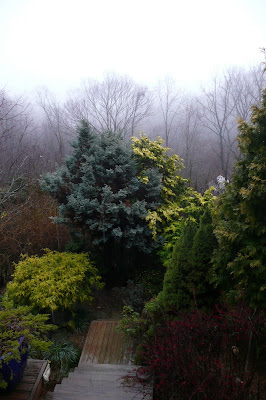 Another rainy day and what could be better than a steaming bowl of chili -- green chili. I went on line and, after a little searching, settled on Karen Baldwin's Classic Old-Fashioned New Mexico Green Chili recipe which I then proceeded to follow, as is my custom, more or less.

The main ingredient is, naturally, green chiles. Karen specifies New Mexico chiles, 'Big Jim' variety, but I had to settle for what I guess (they weren't labeled at my local store) are the milder Anaheims. I made up for the lack of heat by leaving in the seeds and ribs, as well as using more jalapenos. 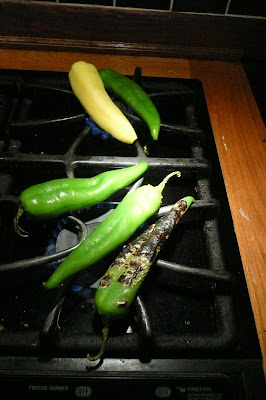 Roasting the chiles over a flame makes me feel like I'm on a cooking show. It's tedious, scraping off the blackened skin but the end product is worth it. And the tiny bits of charred skin that end up in the chili despite my best efforts just add to the look of authenticity.

It's a dish of not many ingredients -- pork, chiles, garlic, a little onion, a very little tomato, chicken broth, salt, pepper, and cumin. There are various opinions on how fatty the pork should be -- tenderloin with all fat removed or pork shoulder, that has a fair amount of fat. I used something called boneless country ribs and left some fat on for flavor. 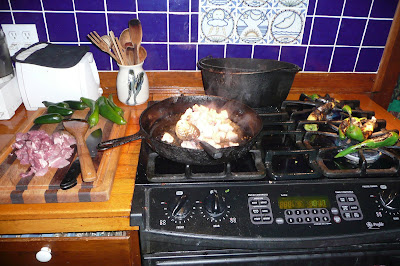 It needs to cook slowly -- a crock pot would be good but I don't have one. So the stew simmered all afternoon in my big iron kettle till the cubes of pork dissolved with the other ingredients into a homogeneous mass and the whole house smelled wonderful!

We served it over rice, with sour cream and store-bought green salsa as toppers. Highly recommended -- though I suspect that the original recipe is optimistic in saying that it serves four generously. 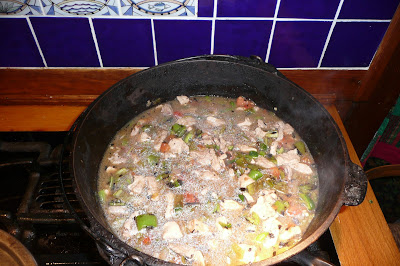 Oh! That sounds delicious! I will print that one out and try it myself. One suggestion - for easier chile peeling, immediately after roasting, put the pepper in a plastic bag and seal to let it steam a bit. After about 10 minutes the skin will (mostly) slip right off.

I've often noticed how the number of servings listed on recipes are never quite right. Especially the yummy ones.

It sounds quite interesting and looks yummy!!

This is really, really good -- a very different taste from standard red chili. and it's even better the next day! It's supposed to freeze well also.

Another time I'll try to find the New Mexico chiles -- as I made it, the stew had some heat but we wouldn't have minded something a little more challenging.

And I'll try the sealed plastic bag, Karen. I used a brown paper bag and only closed it loosely.

Let me know if you all experiment with this!