I should be ashamed for that title. But sometimes I just can't help myself.

After Debra's comment, saying that she especially liked seeing the chickens, I decided to invade the girls' privacy and catch them in the act of laying eggs-- which they've begun to do at the rate of six or more a day. There are 12 new chickens plus 5 old girls, and then the banties -- we're looking at a lot of omelets once everyone comes on line.

In the picture below, a Wyandotte and an Ameruacana are hard at work. The next box between them holds one egg and one golfball -- John put a few golf balls in the nests before anyone began to lay, just to give the new girls the idea that this was the place. Even so, there've been the occasional eggs atop the nest boxes or even outside in the dirt when a biddy has been caught short. (Oh, my goodness! What's this? BbbWawk!!) 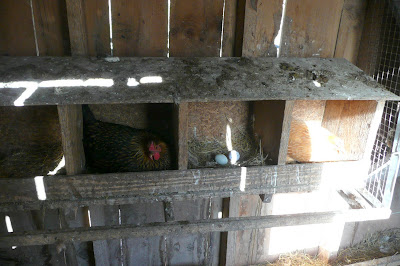 The Wyandotte (below) wishes I'd get a life and leave her alone. 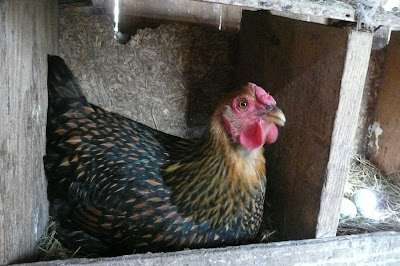 The golden Ameruacana has just stood up and is straining to deliver her egg. The egg will drop a few inches -- good reason for hay in the nest boxes 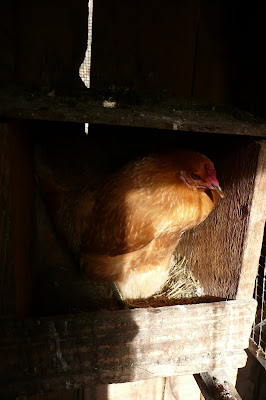 The pale blue egg has dropped and the Ameruacana has begun her triumphal song -- Buck, buck, beCAW, buck, buck, beCAW. She's also heading outside where the rooster will be waiting, having been alerted by her call. I've read that hens are at their most fertile and receptive immediately after laying so that's why the rooster is lurking. 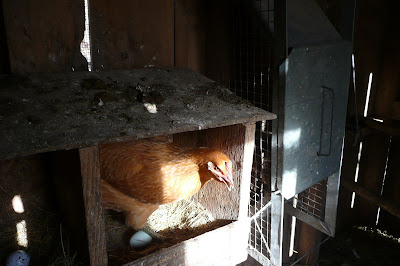 Email ThisBlogThis!Share to TwitterShare to FacebookShare to Pinterest
Labels: Which came first? Chicken or egg?

Vicki, I just cracked up reading your chicken "songs". Chickens sound funny, but their squawking is even more amusing in writing, thanks for the chuckle!

Oh, if only I could approximate the sound of a young rooster learning to crow! Aarr aarr AARR aarr aarrrr -- something between a gargle and a real cock-a-doodle-do. And they usually look a bit embarrassed.

I did a design in felt last year, one side a chicken, the other a fried egg, for Yolanda (Fundora)'s new book called Fuse It and Be Done. It was quickly dubbed "Which Came First." Your chicken stories are most egg-citing to a suburban Jersey girl.

Marta, one of my Christmas presents was a copy of your and Yolanda's Garden Alphabetized. Beautiful, beautiful pictures and lovely, lucid writing! What a pleasure! One might say (and this one wil) -- Egg-cellent! (Groan)