The time has come.

I put away the blues and browns, rusts and golds of autumn and bring out my treasured 'Christmas' quilts.

The red, white and green one was made by my great-grandmother, Alice Morris Wright, in Troy, Alabama. It's not dated and my grandmother, who gave it to me, didn't know much about it. It had been kept in a cedar chest and, so far as I know, never used. 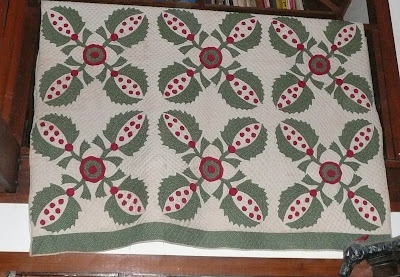 This quilt, a pattern that I can't identify, is made of 9 large squares, each with the red and green motif appliqued on the white backing. Alice seems not to have been a particularly skilled seamstress -- but, to be fair, it's really hard to applique circles.

I'm guessing this was made before Alice was married -- maybe 1880-ish? After Alice was married, she had four children and also worked as a milliner and then as a buyer for an early department store in Troy before dying of Bright's disease in her fifties. 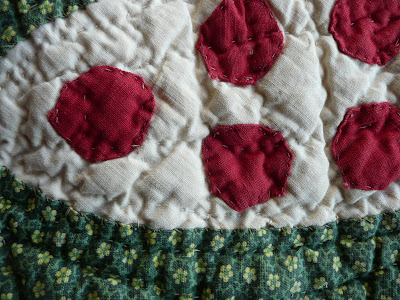 After Alice died, Aunt Georgia was a part of the household as my grandmother grew up. Aunt Georgia made a number of beautiful, quilts, all of which were used. This one of little red and white triangles is quilted with more tiny stitches than I care to think about. 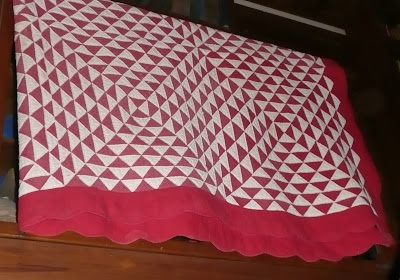 I'm going to ask Pepper the quilter to look at these and see what she can tell us. I know a little about dating by fabrics and styles but hate to make pronouncements. (Is that Turkey red in those little triangles?) 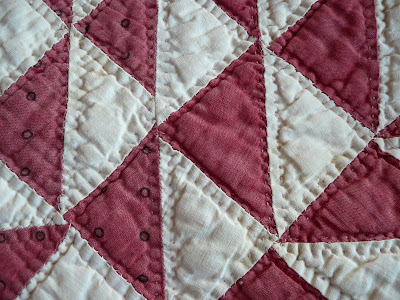 What I do know is that I look forward every year to bringing out these quilts to warm our spirits at Christmas -- and to remembering two women I never knew.

(Ethan update: He continues to improve but is still on the heavy duty shot-in-the-belly blood thinner till the other meds kick in. He's at home and getting work done but has to go in for blood work twice a week. Many thanks to all who've sent good wishes!)

And this update from Pepper: "I think the applique quilt is some species of Coxscomb. The green calico was a classic print by Eli & Walker and was available from the 1880s right up into the 1970s. In the pictures, the red looks slightly smudged around the little circles and I wonder if this that might indicate a less than fast red. Or is the picture slightly blurry? I do know that when a chemical red dye was being developed, there were a lot of misses, the most famous being the fugitive red dye that quickly faded to tan. That was called Congo Red and named in 'honor' of that African country being annexed by Belgium in 1884. Your 1880 date is spot on.

The other triangles quilt might be inter-generational. The red with black circles looks like a faded c.1900 print but the solid red on the scalloped border looks newer and of a different weave (thanks for the close-ups!). Maybe this top was made of earlier fabric and then made larger and finished in the 1920s or 30s when the scalloped border treatment was very popular."

A Sherlock of old quilts, Pepper is.

How wonderful that you have these!
I have several old Quilts but none made by family. I love the first one, it reminds me of Holly.

Vicki, I wish I had time to decorate even a little for Christmas. Maybe I can make the family traditional lebkuchen today. I've been busy nearly all day for days doing my ncpoetlaureate.blogspot.com posts for the arts council. I hope your readers check it out.
So glad E. continues to do well.
K. (The quilts look beautiful.)

Such beautiful quilts and how nice to display them at the holidays.

My Mother-in-law was quite the quilter and made all of us kids, and the grandkids too, beautiful quilts as keepsakes. Such small stiches amazed me and the patience, whew!!!

SO glad Ethan is improving.