And There Were Fish! 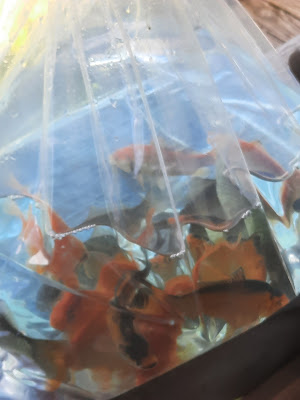 Our little goldfish pool has been without fish for some while. There were only a few small ones (acquired by mail at a ridiculous price as there seemed to be no local source) and they disappeared over the winter.
John undertook an overhaul of the little pool, getting rid of much of the water weed and generally tidying it up. But we needed goldfish.
Thanks to Face Book, I asked on a community page and was directed to a bait shop(!) in Hot Springs.
Eureka! They had goldfish at a very reasonable price and John drove over and brought home a dozen. Along with a minnow and a few snails. 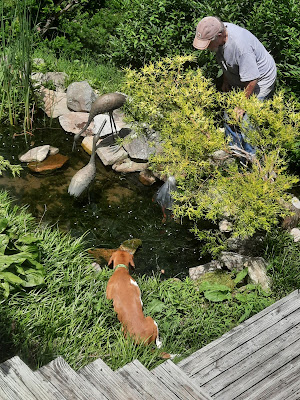 Jenny supervised as John put the plastic bag of fish in the pool to allow the water temperatures to equalize. 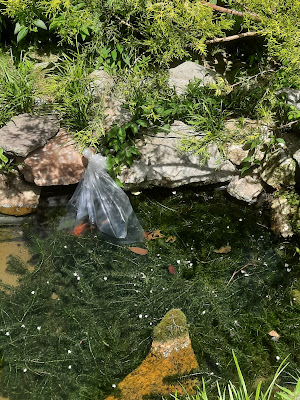 After about fifteen minutes, the fish were released into their new home--where they promptly hid under the water weed.
But it's nice to know they're there. And they'll eventually emerge.
Or not. 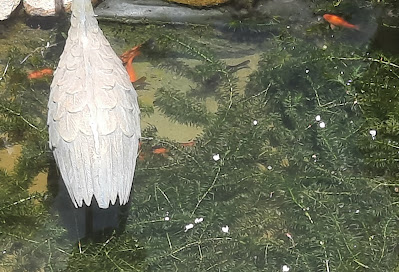 Email ThisBlogThis!Share to TwitterShare to FacebookShare to Pinterest
Labels: goldfish

I hope they have good summer and bring you some pleasure.

Jenny must have been unhappy to see her delicious water weed being pulled out. I hope we'll get to see the fish grow and that you won't lose them all to raccoons.

Love little fish to watch. Maybe you cats can enjoy them too! One friend said Raccoons liked hers.