In Ybor City Back Then 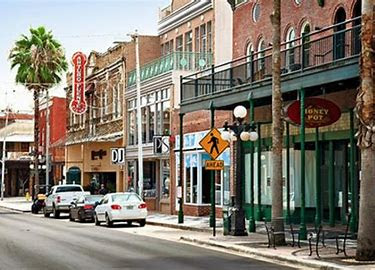 Back in the late Fifties, before Ybor City, Tampa’s Latin quarter, was a tourist magnet, back when it still had cigar factories, during summers and Christmas vacations I worked in the bookkeeping department of the Broadway National Bank. I was one of three employed in manually alphabetizing checks as they came in, then giving them to the bookkeepers to post.

The Broadway was the Ybor City branch of Tampa’s First National and my grandfather, after his compulsory and unwelcome retirement at sixty-five as president of the First, was given the presidency of the Broadway instead of a gold watch. He and I were the only Anglos in the place. but our functions were respectively high and low enough be well removed from the everyday business of the bank and our presence did nothing to sully the pleasant Latin ambiance of the institution. Spanish and Italian were the languages most often heard; the coffee in the lounge was bitter black Cubano, and the lines in front of the tellers were leisurely, giving everyone time to discuss the progress of Castro who was still a rebel in the mountains of Cuba.

As I came to know my co-workers, I fell in love with them and their ways. My closest friend was Viola, or Violin, as the others called her when she was particularly noisy. She sat beside me at the check sorting table and delighted in sharing tidbits about her life. She was in her early twenties and lived with her parents—her father packed her lunch for her. Viola had been married briefly, during which time she and her husband had lived in the ‘projects’ where, she told me, she had kept the shades down and walked around naked in her apartment all day. I never learned why this idyll ended, but now Viola was leading the life of a sheltered senorita, chaperoned to roller skating lessons and to the dances at the Centro Asturiano by her father.

Viola and I were aided in our check sorting by Henry, a small angry young man who aspired to the rank of teller but had made little headway in impressing even the bookkeepers. Henry dressed carefully, like a young man on his way up, but his appearance was marred by his over-lavish use of hair oil and a bad case of acne. He was often the butt of the jokes of the male bookkeepers—except for grandfatherly Carlo, the head bookkeeper, who was kind to him and patient with his outbursts.

But Jesus, a serious, hard-working Cuban who would eventually work his way up in the bank’s hierarchy, had no time for Henry’s ineptitude and occasional histrionics. And Willie, a tiny emotional Puerto Rican, offered to fight Henry at least once a day. Since Willie had actually been a featherweight champion back in Puerto Rico, his challenge was never accepted. When feeling especially aggrieved, Henry would talk about going to Cuba to join the rebellion.

In these pre-computer days, accounts were kept on posting machines, giant adding machines set on pedestals with partial surrounds and attached seats which the bookkeepers mounted in the morning like knights going to do battle. All day long there was a constant rattle of keys as we check sorters rushed newly alphabetized stacks of checks to the busy warriors. As the end of the day approached, the pace grew more frantic and the tension mounted. Would they balance?

One by one the bookkeepers would finish, the ping of a bell on each machine announcing a successful conclusion. At the end of a triumphant day’s battle, Jesus and Willie would shout “Pelota!”—which my elementary Spanish identified as ball, but which evidently meant balance to them. If a balance was not achieved, usually Carlo or Jesus would go to the rescue and help trace the missing numbers.

When Willie did not balance, he would routinely disappear into the adjoining storeroom, from which we would soon hear loud thumps on the wall. Then Willie would emerge, hands to his head and grimacing in pain. During the day Willie often sang as he worked, and if Carlo, who liked quiet, reprimanded him, would reply, “I sing to keep from crying.”

The female bookkeepers were Nora, Conchita, Angie, and Rose. Rose was a tiny mousy woman who might have been anywhere from thirty to fifty years old. She was very quiet, never entering into the joking and horseplay that went on. From time to time she spoke quietly in Italian to Carlo but was otherwise almost invisible. Then one day Rose came to work wearing lipstick and seemed somehow to have dressed with a little more zip. During lunch Nora explained the change: Rose was going to get married to a boy from Italy who wanted to become a citizen. As the weeks went on, Rose became more and more talkative, and we all learned how smitten she was with her ‘Johnny.’ I wondered if she would be happy; we all knew that her Johnny was much younger than she. But they married and eventually Rose became a mother, blooming into quiet happiness.

Nora loved to talk and I loved to listen. She was only a part-time bookkeeper, helping out with the check sorting when needed. Nora was a hefty, pleasant-faced woman whose chief topic was her husband Raul. Raul was from Cuba and had old-fashioned ideas about marriage. No matter that Nora worked nine to five; Raul demanded homemade soup with his evening meal. Nora told us gleefully that she bought Garcia’s Spanish Bean Soup, heated it up, and he never knew the difference. “I throw the cans out in the alley so he won’t see them,” she explained.

Conchita was the glamour girl of the department. Dark hair, vivid red lipstick, high heels, she was always good to look at. Undoubtedly plump, but her deep bosom and rolling hips were set off by an unexpectedly narrow waist which was always accentuated by a wide belt.

One day I was in the lounge, sipping on my can of Metrecal, part of an eternal quest to weigh less. Concha and Nora came strolling by and looked in. “We’re going down to Cuervo’s for some lunch; come with us,” they said.

Tempted but righteous, I lifted my can of Metrecal. “Thanks but I’ve got this.”

They laughed. “Come on with us and get some arroz con pollo—you can drink that when you get back.”

My life was enriched immeasurably by the time I spent in the bookkeeping department. They were all so kind to me and if any resented that I’d gotten the job through a family connection, I never felt it. When I married, many of them came to the wedding and for years after that, whenever I was back in Tampa, I’d go back to the bank to visit my friends.

On one occasion I was home to show off my second son who was about six weeks old. I’d made the rounds in the bank and was outside on the sidewalk, waiting for my grandfather. As I stood there with the baby in my arms, an ancient Black man came slowly up the sidewalk toward me. He stopped and wordlessly indicated that he wanted to see the infant. A little hesitantly, I held the baby out so the old man could get a better look at him.

He studied the sleeping infant for a long minute, then uttered a single word. “Ruler,” he said and continued on his leisurely way.

I was intrigued; was this a prophecy? I knew that Ybor City was home to practitioners of Santeria and Voodoo; I myself had once gone into a dim little place with the sign Herb Shop on the window and had found, not parsley, sage, rosemary, or thyme but the ingredients for a mojo hand—High John the Conqueror Root, Dragon’s Blood, and the like. So when this old man appeared out of nowhere and named my son a ruler, I didn’t forget it.

I also didn’t mention it till maybe twelve years later. My younger son was out of sorts, feeling that his older brother got all the breaks. I remembered the old man and told the story. My younger son listened eagerly, and I could see him beginning to stand a little taller and look a bit masterful. I wondered if I’d done the right thing—maybe this was the way Napoleon got started.

Quickly, I issued a disclaimer. “Of course, he could have said ‘Drooler’.”

What a remarkable memory you have, and your gift of writing, made the characters seem real and interesting.

Cheques, or checks to you, are almost a ting of the past. It has been some time since I had to order new check cheques. :)

All those time-ago people brought back to life through your story ... A wonderful beginning to my day. And the final touch: your son the Drooler. I needed that laugh! Thank you, Vicki.

Kudos to Ybor City and those wonderful people in that bank. What a great rendition of your days working there. I don't know which little shop I went to, but as soon as I discovered the Cuban garbanzo soup with such great sausages, I would go buy a big cup on my lunch break from the architect's office where I was working as an apprentice. And a few cups for friends as well! But I don't have these clear memories that you do!

Ah, Ybor City of old… I worked at Cosmo Commercial Body Builders, at the edge of the business district. I was one of only two Anglos; the other was Curley, the bookkeeper, who hired me while the boss was out of town. The only bathroom at Cosmo was out back in the shop where the 15 or so men stared and sometimes whispered when I went back there. I didn’t last long. I was 18, and from a small Florida town where almost everyone spoke with a slow southern drawl. I had never been around people speaking Spanish or Italian – and everyone spoke so fast! When the boss returned from a two-week trip, we quickly discovered I couldn’t understand him well enough to take dictation. He was very kind about it, but we knew it wasn’t going to work. They kept me for all that week as it was almost Christmas. On Christmas Eve everyone worked half day. I was given a ‘bonus’ and a fifth of whiskey – like everyone else - then bid farewell. The Columbia served a very inexpensive lunch in the beautiful bar – everyone eating, no one drinking liquor at lunch time. The restaurant’s ‘your water glass is never empty’ tradition held even during lunch. Ate at Cuervo’s (and Cohalla’s) many times.