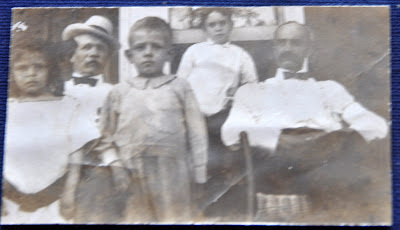 Tampa, Florida -- the early 1900's. An early autumn afternoon and C.L Knight, the family patriarch, and his sons and grandchildren are taking their ease on the front porch  while the women of the family are inside -- resting after the exertions of Sunday dinner.

The house is located in what is now downtown Tampa and many a fashionable couple is out strolling, parading in their Sunday finery.  The Knights smile and nod and comment privately on their passing neighbors.

A newly-wed couple, arrayed in particular splendor, approaches and the men lean forward with special interest for the blushing bride was, before her marriage, one of the ladies of pleasure in a well-known sporting house. All three men grin and nod to the couple who acknowledge the greeting and continue on.

"Well, boys," says the patriarch to his sons, as he leans back in his rocking chair and watches the shapely bride out of sight, "there goes a mighty fine piece -- and we all know because we've all had some."

A sound . . . a muffled word . . . an intake of breath behind them and the men turn to see Mrs. C.L. standing there just inside the screen door with a face like doom.

The family story -- as told by C.L.'s grandson, Charles Lafayette Knight II -- says that C.L. took one look at his wife and set off for his hunting camp in the Everglades where he stayed till just before Christmas, returning laden with gifts for everyone.

That's just one of the stories Uncle Charley told. Another was how when C.L. the first died  (much later and of natural causes -- nothing to do with his wife)-- Seminoles from the Everglades  appeared the next day in Tampa and camped in the yard for three days, singing songs to help their friend's spirit on its way.

My husband's family is full of story tellers -- and they all adhere to that fine old Southern tradition of never letting the facts get in the way of a good story.

I love both stories for different reasons. If the Seminole story is true, what a fine comment on the quality of his relationship with them.

How fun...unbelievable! Which is what I most enjoyed about these two interwoven stories.