When She Was Very Young 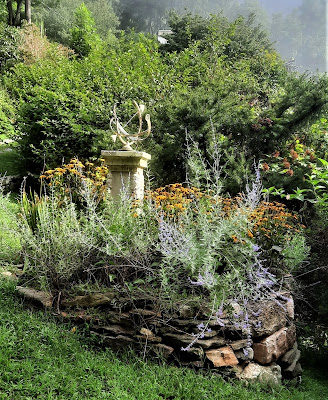 The child rotated slowly in the well of light. She had pulled the mirrored closet door all the way open till it touched the window, forming a secret place, a tiny three-sided magical room filled with early sun and the summer smell of new-mown grass. The rhythmic back and forth whir and grind of the hand mower in the yard below was a soothing background to the sounds of a warm Saturday morning. Mourning doves called softly back and forth in the live oaks surrounding the house. Next door, a car started. The child continued to turn—dizzy with brilliance and the happiness of the day.

Across the room her grandmother was making up the two double beds. plumping the feather pillows and setting them to air in the wide windows at the far end of the big room. As the sun warmed the cotton pillowcases, the clean smells of starch and ironing joined the sweet green grass smell.

Soon the child would go downstairs; her grandmother would go outside and cut pink and yellow and coral Gerbera daisies to arrange in an etched glass bowl that stood on a table in the front hall. An old lady, a friend of her grandmother’s would come to lunch, smelling of talcum powder and Jergens lotion and wearing a flat little hat with a silly crumpled veil. Miss Glennie and her grandmother would eat chicken salad and potato chips and peach pickle and talk about people the child didn’t know. She would get bored and go into the sitting room where she would kneel on the sofa, arms stretched across its back, staring out the front windows at the street beyond the yard and sidewalk. Squirrels would dart to and fro, flirting their bushy tails, and the rough upholstery would scratch her knees.

Later she would go play in the backyard. It was bounded by a low hedge but the rolling greens and fairways of the golf course beyond seemed to go on forever. Frankland’s Lake was out there in the far blue distance, hidden by trees. Sometimes, when it was really quiet, she would listen for the guns. A war was going on and her daddy was overseas in a place called Burma. That’s why she and her mother lived with her grandparents. So she listened hard and wondered if the sounds she heard were guns and if tomorrow she and her grandfather would walk all the way to Frankland’s Lake.

In the late afternoon, when long shadows slanted across the grass and the heat hung heavy in the air, her mother’s friends—the ladies—would sit under the trees in the backyard, sipping iced tea from the tall sweating glasses they rested on the broad arms of the wooden lawn chairs. The ladies wore crisp linen dresses and chalky white pumps with fat high heels. Sometimes they had on stockings with black seams running up the backs of their legs. They talked and smoked cigarettes, leaving bright red lipstick smudges on the cigarette ends and fastidiously picking occasional crumbs of tobacco off their perfect lips.

At night, after their supper of Campbell’s tomato soup and saltines, her grandfather would pull the window shades down, making a cozy inside world. Around the tall cabinet radio in the sitting room, they would listen to the hiss and crackle that was news about the war. She would wait sleepily till it was time for bed. Then they would climb the stairs, past the clock on the landing and to the big room where she would snuggle into the little cot placed between the two big beds. After she had said her prayers, she would stretch out and fall asleep, her grandfather holding her left hand while her grandmother held her right.

I wrote this maybe thirty years ago, remembering my charmed childhood. Where was my mother? She had a room over the attached garage. I expect she preferred the independence of a separate schedule. Before my father returned from the war, she bought a tiny little house in another neighborhood and we moved there—though until I went off to college, I would continue to spend many days and nights with my grandparents.
at August 27, 2021

How wonderful...this little you describing a lovely moment with your own grandparents, when we've been enjoying your sharing of you as a grandmother with Josie, the third generation going the other way!

Lovely story - you have been able to convey so much in your choice of words.

This brought back some memories of the war years. I recall that my mother and her young friends, like many women of the time, sometimes drew seams up the backs of their legs when they couldn't find stockings because, of course, all hosiery had seams then. I don't know what they used - Ink? Heavy black pencil?

Also, having lived in Tampa, it was easy for me to visualize that Palma Ceia neighborhood I drove through now and again. It changed very little over the years. Haven't been there in ages and doubt I'd recognize much of it now.

Thanks for the trip down memory lane.

Actually, the house is still there--little changed on the outside.