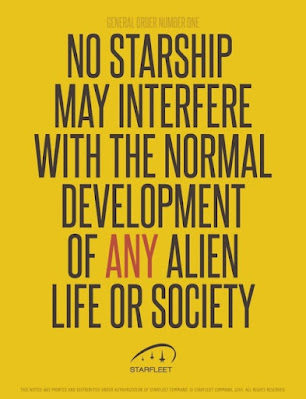 Tempting though it may be.
I find myself thinking about Star Trek and the Prime Directive  as the news from Afghanistan tells of the abrupt collapse of the government at the hands of the Taliban. Oh, no, I think--all those women who had begun to enjoy a greater freedom are going to be back in burqas and relegated to chattel status.
But. The USA is only the latest in a long list of powers that thought they could change Afghanistan. Alexander the Great, the Brits, the Russians--the best any could do was to suppress the local fighters with a permanent and hazardous occupation. And then, when it became obvious that the hazards and costs were only buying a fragile respite, the powers withdrew.
As the US is doing. Twenty years and over 2,400  lives have gained little or nothing.
"What did my buddy die for?" asks one veteran.
Good question. The initial avowed purpose was to stamp out Al Queda and get bin Laden (a Saudi, by the way.) That done, it should have been a cue to exit. We didn't. And now we are. Maybe it could have been managed more gracefully.
But sending more soldiers into harm's way isn't going to change the fact of that buddy's death.
My husband just reminded me of a quote from an Afghan fighter--"You Americans have the watches. We have the time."
And that's what counts in a situation like this. The Afghans outwaited Alexander the Great, the Brits, and the USSR. They outwaited us and now they come, roaring back.
My heart breaks for the women and for the non-fundamentalist Afghans, for those who aided the US. My heart breaks for those all over the world, suffering at the hands of brutal regimes. But, our meddling in the affairs of other nations invariably turns out badly, especially when that meddling is due to some perceived advantage to our country.
On the other hand, once the Taliban establish their fundamentalist, repressive,  uber-conservative society, perhaps strong-man admirer Tucker Carlson will pay them a visit to see just how wonderful such a government can be.
Maybe he'll stay there.
at August 16, 2021

My heart goes out to the women and girls, who haven't known non-American influenced Afghanistan for 20 years...though the grandmothers may have. It's a nation that has been torn for centuries. Yes, let's somehow send Tucker Carlson there!.

Those poor women and girls. I don't suppose most men will have a lot of fun either, but they will certainly do better than the women. Yes, Tucker would look great tucked right into that society.

So sad and that "raising star", since our move, Tucker Carlson! You have found all the right words Vicki.