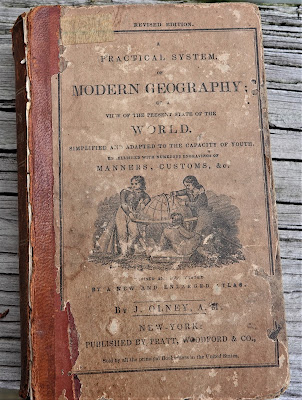 I came across this little geography text from 1846 and was reminded how students have always been at the mercy of the textbooks they are issued and that just because your textbook says something doesn't guarantee its accuracy. But many people cling to what they learned at their mother's knee or in grammar school, despite evidence to the contrary. 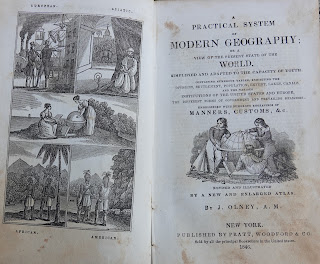 When I hear people on the right yammering on about patriotic education and their fear that impressionable youth will be taught to hate the USA if given the historical facts about the slavery and genocide that accompanied the founding of our nation, my mind flashes to the tall black Pilgrim hats and feathered headdresses, both made of construction paper, that were my introduction to USA history. How wonderful that the invaders (Pilgrims) and invadees got along so nicely, down to sharing a Thanksgiving meal! 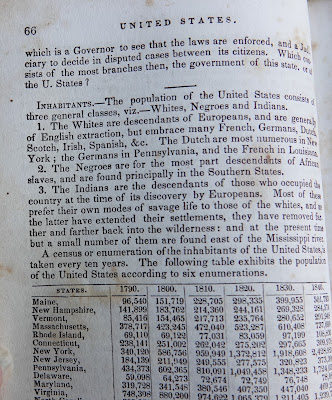 It's the folks in charge who write the histories, alas. 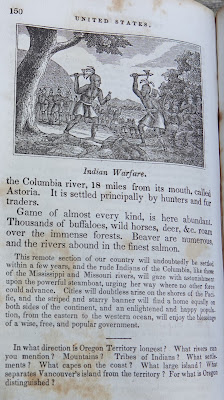 This little book covers the US and its territories exhaustively and moves on to the rest of the globe.  Including Asia, where "our first parents were created" and where appeared "the Savior" and the gospel "which is ultimately to bless all nations." The author is not afraid to characterize whole groups of people as ignorant or lazy or wicked.
And while modern day texts aren't quite so blatant, I suspect many of us were taught some untruths that may still linger. I know I was taught that the Civil War wasn't about slavery (wrong) and that the Native Americans welcomed the White settlers. (Except when they didn't.) 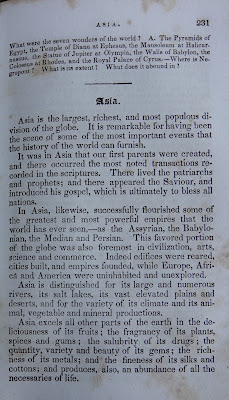 I wonder what sort of man young Benjamin, whose book this was, became?  (I can't make out what his last name is or I'd look for him online.)
He wrote:
Benjamin _____
is my name with my pen
I write the same the grass
is green the rose is red
here lies my name when
I am dead and in my
grave and all my bones
are rotten when this you
see you will remember
me when I am quite
forgotten
And now we do. 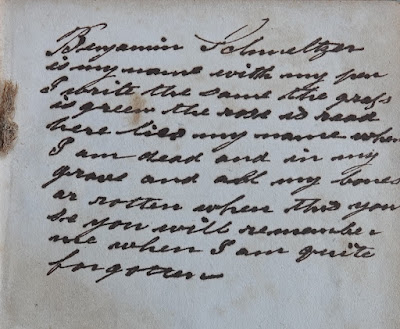 At least creationism has not been making inroads into the curriculum as much as they try. Or so I believe to be the case.

I can't believe a young person would have the emotion to write such a phrase on his book, though with the lovely penmanship, he may have been a pre-teen at least. What a depressing thought! And don't get me started on how history texts mislead children...wonder what an appropriate Thanksgiving play would be about these days. Maybe vegetables?

Last name looks like Schultzes to me.
But you are so right about history texts. Teaching 4th grade we had a social studies text that described a plantation as a small town -something special for the people enslaved and living there. I tried to correct that impression or avoid using that portion of the text.

Responding to Barbara Rogers's comment: Children would have had the emotion. It's likely that Benjamin Schmeltzer (?) had a sibling who died in childhood, or a cousin or playmate or schoolmate.

I am minded of a primer published back in 1835, just a decade before your geography book, Vicki: Peter Parley's primer by Samuel G. Goodrich. In it, there's a poem called "The Hill-Side"; it begins with several stanzas about why the writer loved the hill in question (including watching kittens playing on it); the last three stanzas read:

But more I love the hill-side,
That, with my little brother,
We often on our sleds did slide
In joy with one another.

And, Oh! I love that hill-side,
For there the boy is sleeping,
And there at quiet even-tide
My mother oft is weeping.

And yet she loves the hill-side,
And kisses me so cheerly
When there we meet at even-tide --
I love, I love it dearly!

The accompanying illustration shows a woman, small boy by her side, seated on the plinth of what is obviously a grave marker, to make clear the actual import of those stanzas. Death was simply an accepted part of life back then. Also, young Benjamin would have had similar poems, or other writings, upon which to draw. (Open question, to me, whether Ben wrote his poem himself or if he cribbed it from somewhere.) Can you imagine a poem with similar sentiments in an elementary school textbook today?

As for the handwriting, penmanship was carefully taught from a fairly early age.

If anyone is interested in finding out what primers were like two centuries ago, you can check out Peter Parley's primer here; the poem whence I quoted is on pp. 41-42.

p.s. -- The Library of Congress has made other editions of Jesse Olney's geography book available for reading online or downloading in a choice of formats:

Wikipedia has an article on this author:

For that matter, there's an article on "Peter Parley" (Samuel Goodrich) as well; it makes for interesting reading, methinks.

(And here endeth the lesson -- I promise! [laughs])

So cool that all this is online. I'll spend some time with it. I'm sure that the children of Benjamin's time were well aware of death--it took so many infants and children.

And we are still writing History books the same way as it was years and years ago. Luckily we have always the power to live in peace with our direct neighbors.

I, like Marcia, thought the name might be Schultzes, and since the first name was Benjamin, I wondered if he might be of Jewish descent or from an immigrant family from (eastern) Europe. I, too, wondered if the poem might be unoriginal, as a sing-songy verse that any children might have copied into a new book. It had a bit of the quality of things we wrote in each others yearbooks.