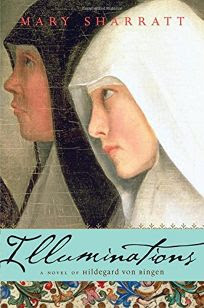 My recent reading is, as usual, all over the place. New to me was Illuminations by Mary Sharratt, a novel about Hildegard von Bingen--the famous mystic. composer, theologian, nun, writer, and eventually, abbess of her own foundation.
It's a fascinating look at the religious politics and policies of Medieval Germany--from the horrifying practices of extreme asceticism (HvB was an anchorite for thirty years--walled into a little enclosure from an early age) to Hildegard's ecstatic visions of God and Nature and the Divine Female.
Now I want to know more about Hildegard and her various works--a multi-talented woman in a time that wasn't ready for her. 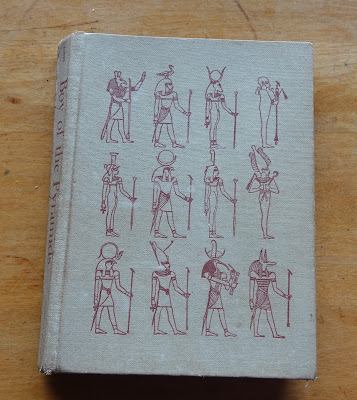 I'm not sure what brought this book-Boy of the Pyramids by Ruth Fosdick Jones--to mind. One of my childhood favorites, I found myself remembering bits and pieces till I had to go chase it down. (It was upstairs where most of my childhood books are.)
So, I settled in to re-read this gentle kid's mystery set in Ancient Egypt. And, as so often happens with books from my childhood, I saw things I'd not noticed back then.
There are slaves-- the young hero of the book actually buys a young girl to prevent her being separated from her parents who are being purchased by his father. But all the slaves seem to be happy--from the Nubians carrying the father's litter to the girl's parents, originally from Sinai.
This is a book designed to give kids a picture of life in Ancient Egypt. And, of course, it's well documented that there were slaves. Maybe those who had kind masters were content. I wonder.  ( And maybe I should be saying enslaved persons . . .) 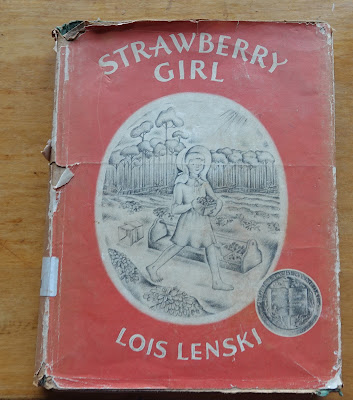 While I was in pursuit of Boy of the Pyramids, I came across another favorite from back then--Lois Lenski's Strawberry Girl, a tale of life in the Florida backwoods in the early 1900s.
This was always close to my heart for, even though I lived in a Tampa suburb, there were still traces of Pioneer Florida to be found. My father's folks were early settlers--Crackers (from the whips used in herding cattle on the open range.)
On this re-reading I noticed first that the family the story is about had come from "Caroliny" and that the way they speak and the way they live is so much like  the older folks we met when we moved to Western North Carolina, that it's no wonder I felt like I was coming home. 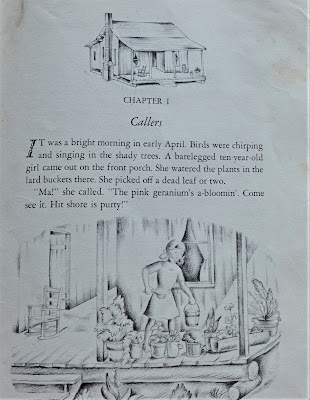 Email ThisBlogThis!Share to TwitterShare to FacebookShare to Pinterest
Labels: books, books in my past

That is a definite mix of genres. I didn't know that anchorites lived like prisoners in solitary confinement. How did they stay sane?

Good question. BTW, I dug up and put the white iris root in the mail yesterday.

Hie thee to a nunnery...not sure who I'm quoting. But spiritual quest was not the only reason women went to a nunnery, as I'm sure you already are aware. So for someone who dedicated her life to it, I'm glad that she (or someone else) wrote about it. You were having a nice balance of cultures to read about. And now I'm going to do Qui Gong exercises from YouTube - just to add another culture to the conversation!

My own favourite children's book set in ancient Egypt is The Golden Goblet by Eloise Jarvis McGraw. The main character is the young son of a goldsmith who, although he shows great potential as a goldsmith even though he's still a child, is after his father's death apprenticed to his abusive brother's stone carving shop -- a trade that will ruin his hands for the delicate work of a goldsmith. Worse, he soon discovers that the brother is up to something ... and it's not something good. My copy perished (along with almost all my childhood books) in a basement flood, but my memory of it was enough to prompt me to buy a new copy a year or two back. And, yes, I loved the book all over again. :)

The Wikipedia article alas has spoilers, but --
https://en.wikipedia.org/wiki/The_Golden_Goblet

Oh, I'm pretty sure I remember that. Will acquire a copy... Another Egyptian favorite was Mara, Daughter of the Nile.

I already went twice to listen to Organum and medieval music written by Hildegarde de Bingen in Moissac so it will be with pleasure that I will read "Illuminations". Thanks for sharing your reads.
https://tournefeuilleatoz.blogspot.com/2017/05/musique-medievale-24.html