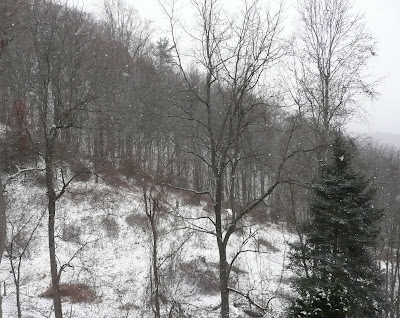 Yesterday's snow and those words on the radio took me back twenty-some years.

Those were the magic words we waited for back when our boys were young. A few blowing flakes the night before would arouse our hopes and as soon as we woke, we'd turn on the radio. Sure, the ground was white outside but we're just high enough up the mountain that there might be no snow at all down on the hard road, half a mile downhill. So we waited for the radio to confirm our hopes. 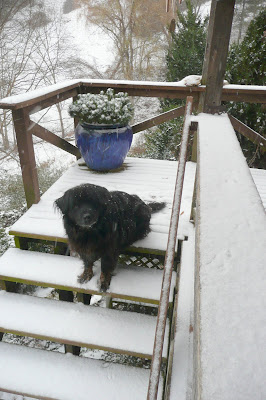 The roads are key. Our county is large and doesn't have the snow removal capabilities of northern states (like New York, where my sister-in-law tells me they have 28 inches on the ground.) Their schools rarely close and their roads are kept clear, though snow piles higher and higher on the shoulders, but here in Madison, with only one high school and buses traveling long distances on sometimes not-so-great roads, a little snow in the upper reaches of the county is enough to shut the whole system down. 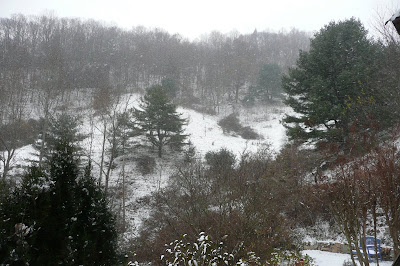 "No school!" we'd holler upstairs to the boys and all of us would pull the covers higher to catch an extra bit of sleep.

Eventually there'd be the chores to do and a lovely Little House In The Woods day would follow with cocoa and popcorn, cookie making, reading by the fire, maybe a pot of soup or chili simmering on the stove. If there was enough snow for snow balls and snowmen, that was on the schedule, as was snow ice-cream.

These lovely unexpected holidays were treasured -- though I must admit, there could be too much of a good thing, as in the memorable January-February of '78 when schools were closed for six weeks.

They say this winter may be colder than usual. Children all over the county are probably keeping their fingers crossed.

How beautiful........I too have those same memories from living on the farm in Tennesseee with my three children.We were 15 miles from town so it only took a half inch to stop the'cheese wagon'from running.I think three weeks was the longest they stayed out.You know I'm green with eny right now
but thankful you shared the event
via the blog, thanks!

Oooh Vicki, do I remember those days!!! Yes, my boys went to Madison Co. schools too and it was always staying snuggled in our beds, 'hoping' for that announcement and then woo hoo, after chores were done it was fun time, but those six weeks that one year got old in a hurry, not for us at home but for the boys and the school work they got behind on.

Hey Pat and Carol --- I've spent the day with my laptop by the fire -- too cold upstairs. We even had popcorn (but no cocoa.) It's kind of warming up now -- kind of. But awful cold for before Thanksgiving.

I'm not sure if it was in '78 or not, but it could have very well been, but we were out almost six weeks too. Snow covered the ground for 45 days. I loved it! But I sure hated having to make up school on Saturdays and way up into the summer. They declared it 'An Act of God' so we only had to make up about half of it, and I remember that Saturdays counted as two days. Oh I was bitter by the time if was over! ha.... Our area is very similar--with allot of outlying/backroads it doesn't take a whole lot to shut down the system. Your snow is lovely, but I'm glad we haven't gotten any yet!
Tammy

I don't have kids, but since my husband works at the community college, we still tend to watch the school reports. That anticipation is still there. We get up at about 4am, so he's usually about ready to go before they make "the call," but it's nice to be able to crawl back into the warm bed on those rare mornings when the college closes.
:0)