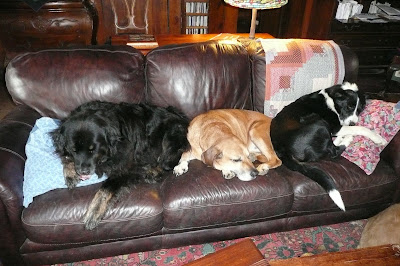 At one point yesterday, there were eight dogs clustered in the area around the fireplace -- our six plus Justin and Claui's two. Carolina football was on (don't ask) and as I tried to thread my way among the people and dogs to put another log on the fire, John commented that I looked as if I were playing that party game from some years back -- what was it called? -- oh, yes, Twister.
This is pretty much how yesterday went -- the dogs napped; I brought my laptop downstairs to write by the fire because my workroom was too cold for anything approaching comfort.

Miss Birdie is still leading me in strange paths -- tango, films of the Thirties, raven mockers, eugenics, and more.

And the characters are really telling me the story now. I begin a scene and they take it where they want it. Sometimes they even turn out not to be who I thought they were.

I wouldn't have it any other way -- It's like watching a movie in my head and hurrying to record the action and the dialogue. Except that these character are often prone to wordiness and I have occasionally to rap on their heads and beg them to get to the point and not be so enamoured with their own silly conversations.

Getting closer. But, oh, for the luxury of several years to research and polish!

Hang'n out with Miss Birdie is a great way to spend a cold day! I hung out with "Sugar Pie, Liz" and my friend, Maggie hung out with "Signs".
Today I am hang'n out waiting for my 10-0 Titans to give me my weekly
nervous breakdown! Brett Favre is my neighbor so today's game is a gonna really be a nail biter!
GO TITANS!

I'm not a sports watcher, but I do get a bit of a thrill when certain teams win their games. I was born in Minnesota, so there's the Vikings. The hubby is a Georgia boy so there's the Bulldogs & sometimes the Atlanta Falcons. We live in NC so there's the Panthers. Good thing we don't watch football. There'd never be time for anything else.

I'm not a sports fan -- but I live with one. And others visit -- all Carolina fans. I was working away at my laptop while the Carolina football game was on and I gathered from the general tone of disappointment and despair that their boys were not doing well.

They say it'll be different with basketball.

Well, maybe it won't be so different with basketball, after all. Duke looked pretty good a couple of nights ago! I don't watch football. Basketball is my sport. It's a Dukie household. As for dogs, they have all been inside, too. On the sofa,on the bed, sprawled in the kitchen, just generally being underfoot and under butt. My husband sat down on Byron yesterday. Ace is on his back, displaying his underbelly. Byron is now on my pillow, I see, as I look toward the bedroom
Check out the Things With Wings posts on ncpoetlaurueate.blogspot.com. Cool.

re Things with Wings -- really nice. I taught sixth grade English my first year as a teacher and my kids did some amazing haiku.

re Duke-- I myself am non-partisan but those others in the family are of the violently anti-Duke persuasion.

re dogs -- I sat down on Bear last night -- she blended into the dark sofa so well. It was a shock for both of us. We often tell the dogs who are slow to vacate places we want to sit, 'Prepare to meet a terrible end.'