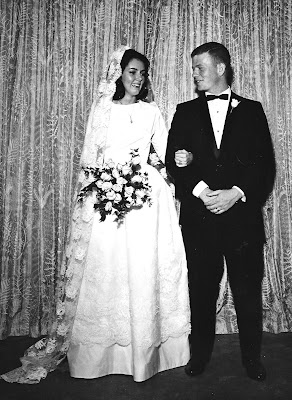 Forty-five years!?! Where does the time go? 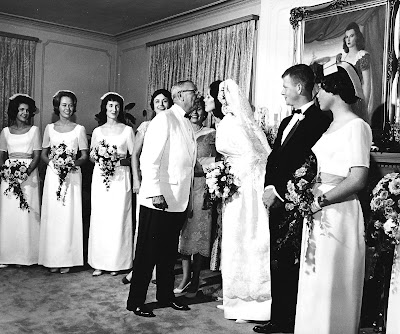 John's grandfather, with whom I am exchanging an air kiss here, and his wife had just celebrated their fiftieth anniversary a few days before our wedding. Back then, I thought they were really old . . . 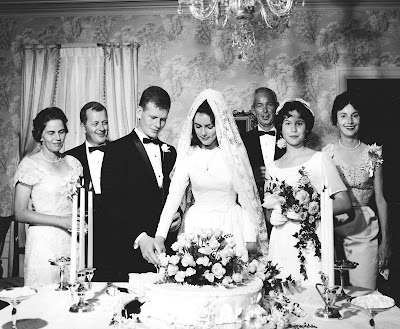 Long ago and a galaxy far away. But it seems to have worked.

Oh my gosh..........You are such a
beautiful bride!Who is the woman in the picture over the mantle? She looks like Scarlett O'Hara !
Congradulations...well done!

The portrait over the mantle is my mother in her early twenties. She's still beautiful, in spite of the somewhat addled smile, in the group pictures.

Beautiful pictures. One of the few times I've seen bridesmaids whose dresses didn't make me wonder what the bride was thinking when she chose them. ;-)

Congratulations on 45 years. I hope you guys are still as happy as you look in the photos. I'm a few years behind you, and looking forward to celebrating my own 45 some day. Being married to your best friend is a wonderful thing.

A cool thing about those dresses -- a friend of mine who'd gotten married a few months earlier used the same ones -- and then she wore the dress I'd worn in her wedding to be a bridesmatron for me. And, with a different sash, I actually wore that same dress for another event a year later. Probably a record for uses per bridesmaid dress.

Vicki, we are moving toward our 40th and I'm determined to have the sort of dress I wish I'd had for our wedding to wear at the big party I want to throw.
I was trying so hard to be frugal--it was the 60's and I didn't want all that bourgois wedding stuff. My bridesmaid and I made her dress, a wispy hippie thing in lovely blue hard-as-hell fabric to negotiate. My dress was way over my knees--it was mini-time. And I had a hideous bow on my head instead of a veil. Go figure. I wish I could do the whole thing over. AND the preacher's wife got mad because we had a glass of champagne afterward and stomped out.
You, on the other hand, look gorgeous in your honest-to-god wedding dress. I think you are the one who looks like Miss Scarlett.

You made a very beautiful bride and the whole party looks elegant. I enjoyed looking at the dress styles and the decor in the house. Happy 45th anniversary! (by the way--22 days after your wedding I came squalling into the world--one month premature, after the traumas of JFK getting assassinated and my uncle nearly severing his foot with an axe. ;-)
Tammy

Hi Vicki! You were a beatiful bride. My weddingday was also in 1963 but on 29th October. Time flies...