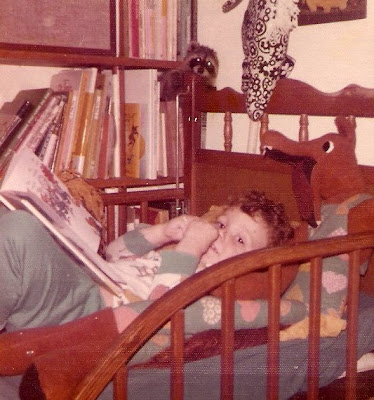 Yep, that's a young raccoon climbing on the bed where our 2 year old is relaxing with a bed time book. This would have been in November of 1974. We were young and foolish and decided that a raccoon would be a nice addition to our household.

Rocky Raccoon (we were/are big Bob Dylan fans) was purchased from a place that dealt in exotic pets. He had been born in captivity, had all his shots, and was perfectly adorable. He had a big cage that he lived in when we were at school (John and I were both teachers and Ethan went to school with us.) But when we were at home, Rocky had the run of the house.

Raccoons are amazingly curious, incredibly dexterous, and infinitely energetic. Our house was pretty Spartan and already child-proofed for our two year old but Rocky tested the limits. He climbed on the bookshelves and tossed down the books; he opened kitchen drawers that the toddler couldn't manage ( there were latches on the cabinets) and threw silverware on the floor; and he sought water wherever he could find it. 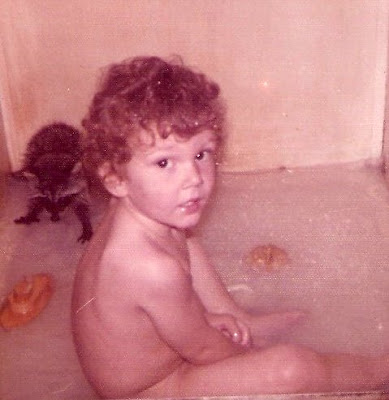 Raccoons are enchanting creatures and a delight to watch-- but though Rocky was friendly enough, he was never what you could call domesticated. He was a wild animal living with us and we adapted to him rather than the other way round. (He was toilet-trained, believe it or not, though we did have to flush for him.)

Rocky was just under a year old when, in June of '75, we packed up our household goods for the big move to the farm in NC. Friends were accompanying us and the animals had been allocated among the various vehicles. I would be driving one car with Ethan and one dog; John would be driving a truck; Betty would have another of our dogs and her son had agreed to take Rocky in his VW Beetle.

On the morning of the big move, we went out early to Rocky's spacious outdoor pen to put him into his traveling crate -- only to find the raccoon-proof latch opened, the door standing wide, and Rocky Raccoon gone forever, disappeared into the cypress swamps around our house.

We have never yet determined what happened. But the fact is that we were all a little relieved not to have to deal with Rocky in a new environment, as he moved into his probably hormonally-driven years.

John has suggested that I might have slipped out in the night and opened that door; I have pointed the finger at him. And we both have wondered if it might have been Mark, who wasn't looking forward to the two-day drive with a raccoon in the back seat.

Maybe Rocky had a secret girlfriend who came to his "rescue" and they lived out their days in the wild, raising litter after litter of cute little raccoons. I can just see him regaling his many descendants with stories of the crazy "monkeys" he used to live with. :-)

We rescued a baby possum some years back; it lived with us for a few days till we took it to the Nature Center in Asheville. It had become something of a pest by then. Our daughter wrote a poem about it. I'll try to find it.
Vicki, I hope you had a good time at the Network Conference. And I know your workshop had a good time with you! K.

Interesting story! Rocky is so cute, but I've heard they can be a handful. I'm sure it worked out for the best for ALL of you when 'whatever' happened to let him out. My Dad worked at a local fish hatchery for years and was closely involved w/ conservation dept. He (unofficially) brought home quite a few injured animals. Most were released after recovery. Some didn't recover. He had a gorgeous hawk that lived for years in a large enclosure with a damaged wing. The 'coon that stayed awhile was bad tempered and angry at the world until her release! Thanks for sharing Rocky's story.
Tammy

Susan,I felt sure that Rocky was equipped to make it on his own -- and like the 'girlfriend' theory!

Kay, the Nature Center's a terrific place -- I took a course there in wildlife rehab -- very interesting. I learned that you can save a box tortoise whose shell has been broken (if not too badly) with duct tape. Also learned, and this made me even more thankful for Rocky's escape, that some raccoons carry a worm which can infect a human who comes in contact with its feces. The worm causes blindness -- which eventually passes off -- but then you die. I've sworn off rescuing raccoons.

The conference was terrific -- enjoyed meeting and talking to Gary Carden especially.

Tammy, see above re raccoon rescue! In case you're ever tempted, rubber gloves are definitely indicated. And good for your dad -- my kind of guy!

Good grief! Some of these posts won't make my Rooter and Snuffle series very popular, but I loved seeing the pictures.

Ah, but, thanks to the joys of make believe,fictional raccoons can have all of the cuteness without any of the problems.

Best of luck with your series!