You can't make this stuff up. (And thanks to Pat in TN for first alerting me to this story!)

from The Mountain Express - Asheville, NC
In case of Maggie Valley moonshiner, a plea for leniency 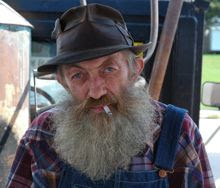 Dozens of people from eastern Tennessee and Western North Carolina have signed a petition asking the federal government to go easy on legendary mountain moonshiner Marvin “Popcorn” Sutton, who was caught earlier this year with hundreds of gallons of untaxed whiskey.

In March, federal agents raided Sutton’s property in Parrottsville, Tenn., and found three big stills and gallon upon gallon of moonshine and mash, as well as a semi-automatic pistol and a revolver. He faces three charges related to the manufacture and possession of selling untaxed whiskey — white corn whiskey, to be exact — and one charge of being a convicted felon in possession of a firearm.

Sutton has entered a plea agreement with the federal government and faces up to 10 years in federal prison on the firearms count and up to five years in prison for each of the moonshining counts. He faces up to a $250,000 fine on each count, according to the the U.S. Attorney’s Office for the Eastern District of Tennessee.

The penalties could add up to a life sentence for the 61-year-old Sutton. His defense attorneys have been asking friends and supporters to sign a petition, which states in part: “Considering his basic nature, age and significant medical problems, we ask the court to consider leniency in sentencing Popcorn.” People from all over the region, including a few from Asheville, have signed.

Sutton is scheduled to be sentenced in federal court in Greeneville, Tenn., on Dec. 15.

The government has said forcefully that it’s vigorously pursuing the case, despite the fact that “moonshine has been romanticized in folklore and the movies.” The production of illegal liquor “is a dangerous health issue and breeds other crime,” the government said in a press release.

Sutton has solidified his celebrity status as a moonshiner over the years. A spiral-bound book about his exploits has been produced, and he’s starred in a homemade video.

Then there are the thousands of gallons of liquor he’s produced and sold.

According to the plea agreement signed by Sutton earlier this year, federal agents began investigating Sutton after firefighters responded to an April 2007 blaze on his property in Parrottsville. He admitted that he had moonshine on his property and he was arrested and convicted for possessing untaxed liquor in July 2007 in the criminal court of Cocke County, Tenn.

The arrest didn’t stop Sutton from cooking more corn liquor. On Feb. 7, 2008, an undercover agent of the Tennessee Alcoholic Beverage Commission met with Sutton and bought 80 gallons of moonshine. One week later, the undercover agent met with Sutton again and bought about 100 gallons of firewater. The two met again on Feb. 28 and the agent bought another 100 gallons, according to the plea agreement.

During a March 3, 2008, telephone conversation, Sutton told the undercover agent he had counted all the moonshine he had available to sell — 500 gallons in Tennessee and 400 gallons stored in Maggie Valley, N.C. On March 12, the agent arrived to buy the 500 gallons of whiskey and agents swooped in. Aside from the moonshine, agents report finding 1,100 gallons of sour mash that would have produced another 130 gallons of moonshine, as well as three stills. The smallest still had a 500-gallon capacity, while the largest was nearly twice that, according to the government.

Click here to go to the Xpress Files and read Sutton’s plea agreement, view pages from his leniency petition and read the government’s argument for a sentence that reflects the seriousness of the offense.

It's stories like this that make you look at yourself and realize that we all have a degree of hypocrisy in us. I believe in following the law but I also believe in the Old Ways of the mountaineers and yes'moonshiner' does have a certain romanticism to it! I do not support their effort to set him up much less sentance him to prison for doing what he and his ancestors before him did to make a living.They should use their time and money looking for meth labs, a REAL health danger!

I see my father is still making a splash in the blogosphere. That's fine with me. I've almost finished my book on the Sutton family history of moonshine- from my father to great-great-great grandfather- so I don't mind the press.
& I agree with Carol in Mississippi : moonshine is wonderful, letting my dad off is not.

I put up this post as a kind of response to all those who holler 'stereotype' when I write about some of the folks in our mountains. But for those who have a little time to waste, you can discover some fascinating stuff by following some of the hot links in the article -- including the complete lyrics to "That Good Old Mountain Dew."

Carol, you're absolutely right about the meth labs -- though there has been some poisonous moonshine made in the past, in general, it's not a hazard.

And hey there, Sky! I look forward to your book. Let us know when it comes out -- you might have some customers here. (Are you familiar with Margaret Maron's mystery series that began with THE BOOTLEGGER'S DAUGHTER?)

I don't make a habit of walking through the woods and not looking at the ground for snakes.I did google Popcorn before your comment Vicki and it looks like I was walking and talking all around a Copperhead. I think non support of children and assault with a deadly weapon overides any notion of romance toward an old pioneer.My apology is offered.
Sky,you can count on a sale to me!

My name is phillip I wanted to say the Gov. should go easy on popcorn sutton.
People in these mountains have always made moonshine and it will always be here. I think they should leave this man alone and let him be. Let's look back in time our ancester's help feed their familys this way there was very few jobs around and people did what ever they could to feed their family. I look up to popcorn he has lived a good life and we all should look up to him and prise him for keeping the past a live today. popcorn you are my hero I will never forget you.

I think popcorn Sutton should be left alone or given Leniency.
Let's look back in time Just about everybodys ancester's had a still somewhere back then. people had no other way to feed their family and they done what ever they had to.
My grandfather raised me and when I was sick they gave me moonshine for cough and colds and I can tell you it works. SO Please give this man Leniency. phillip from Easley South Carolina