What a Wonderful World This Could Be by Lee Zacharias 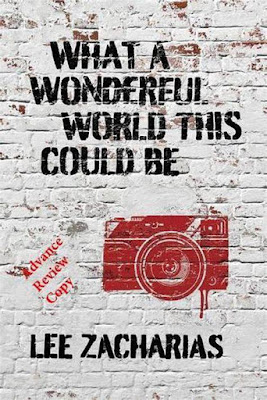 What a Wonderful World This Could Be is a rich feast of language and incident, closely observed and lyrically told. Zacharias’s prose is exceptional, her photographer’s eye acute.

Alex, the protagonist, might be called a psychological orphan: daughter of a father she doesn’t meet till she’s a teen and a mother too absorbed in her art to care about her. The novel moves from 1960 to 1982, tracing Alex’s youthful involvement with an older man who becomes her mentor and then her lover to her passionate attachment and marriage to a political activist who disappears in suspicious circumstances. His reappearance eleven years later forces Alex to come to terms with what has been a lifelong search for family.

This novel is a fine evocation of the political Sixties and Seventies—the Freedom Marchers, SNCC, the hippies and yippies, the Anti-War movement, the Democratic Convention in Chicago, communes and collectives, the Weathermen--and the idealism that sometimes went badly wrong.

The parallels to today are, alas, obvious.

The ending is so skillful I wanted to cheer. And I realized suddenly what a wonderful movie this could be.

MS. Magazine did a fine review. "What a Wonderful World This Could Be": A Tale of Love, Activism and Family in the Turbulent '60s - Ms. Magazine (msmagazine.com)

Email ThisBlogThis!Share to TwitterShare to FacebookShare to Pinterest
Labels: book, What a Wonderful World This Could Be. Lee Zacharias

Wow! This sounds like a terrific book. Thanks for the great review. This is a period very meaningful to me (60s, 70s). Definitely a book that interests me.

Thank you so much, Vicki!