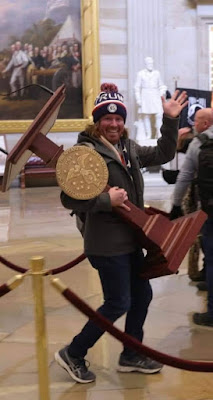 Ivanka called them patriots. I call them terrorists and looters. And traitors. 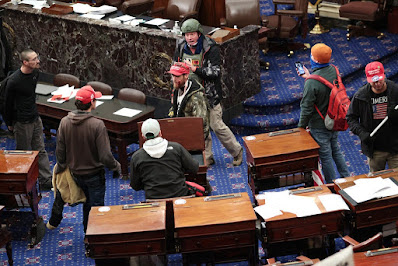 "You're very special. We love you," said the President (but not for long!) of the United States to the mob he had summoned to DC and then incited to storm the Capitol, before retreating to his bunker to watch on television the mayhem that ensued. 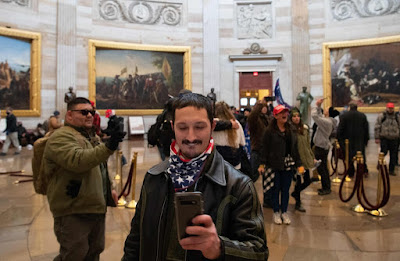 These disgusting low-lifes had a field day, snapping selfies and carrying off souvenirs before they were finally removed. Were any arrested?

Query: What would have happened if this mob had been black?

Meanwhile, I'm celebrating the double win in Georgia that will take the Senate away from the Republican enablers who made this low point in America history possible. And I'm giving thanks for Stacy Abrams and for all the Georgia voters who didn't pick the billionaires to represent them. 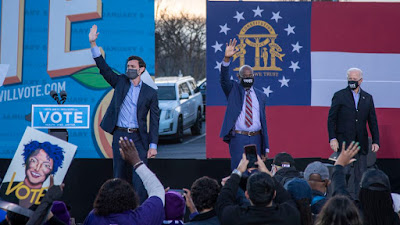 Irrational! surreal! 4 people killed! I was all along afraid of hearing a shot and the consequences...

The response of the police was appalling. They opened the barricades to let those terrorists in and then posed for selfies with them. They also are traitors and terrorists.

I had the feeling that watching Tienanmen Square did all those years ago. I knew I was watching history. Another mob, and this time I was on the side against it! But I saw the same gleeful belief in their cause in the eyes of these mobsters...they were totally thinking they were in the right. They had no idea that they had been "managed." I also remembered the women's marches where we tried to deal with this regime having taken over our government. I think there were few women in yesterday's mob.

I think that you are right in what you shared with us. I'm wondering if these terrorissts will be arrested and pay the price for breaking the law. I'm sick to death of all the animosity that has prevailed for the last 4 years!

I was so pleased with our two GA candidates winning senate seats – driving back and forth to GA to vote had been worth it. But then their win was overshadowed by the monstrous display in DC.

This president did whine and lie constantly, coddling white supremacists and racists. He was also helped by many in his party – they enabled him and his white terrorists. His base is a cult and patriots they are not, they don’t respect the country. They hate the “liberals” and thrive on all the poisonous conspiracies the he feeds them – this is the result; they can’t say they are blameless, they stood on the sidelines and did not object for years (such as the senators and representatives in Tennessee where I also live.) When the Democrats lost last time, women started to knit pink hats and marched in the streets peacefully. When this desperate man lost, he refused the results, threatened and incited violence culminating in an insurrection. What a disgrace. But this lunatic still possesses the nuclear code – he needs to be sequestered immediately before we all perish.

But now we have the satisfaction of the intense outrage against the insurrection. Even some Republican leaders are outraged and there are many resignations in the Trump administration.