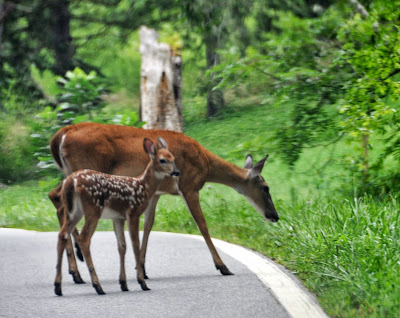 These pretty deer were ambling across the road as I headed to town on Friday -- they were in no hurry and I was able to get these pictures through the windshield. But that's not what I'm here to tell you about. The nice pictures are to beguile you while I talk about the other side of our usually rather idyllic life on the farm. 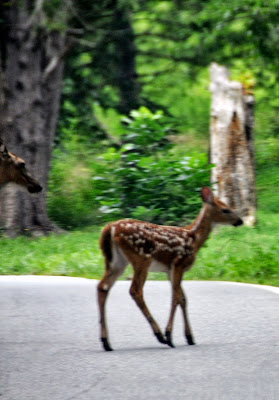 Early Friday morning John had gone down to feed the chickens and I was getting ready for an appointment in Asheville.  From down at the lower place I heard gunshots. Now this isn't as alarming as you might think -- it could be a varmint of some sort was in the chicken house, a neighbor doing target practice . . . but  I called John on his cell to find out what was up.

He was breathing heavy when he answered and then I got the full story. The Jersey bull that we purchased back in December had tried to kill him.

Now dairy bulls are notoriously bad tempered and we had known this. In fact, Tammy of Fairlight Farms had also warned us. But this bull had been reasonably amiable and we wanted to use him to breed Silverbell and Marigold and Clover  in hopes of another Jersey heifer. And then we would take him to market..

As of now, Marigold and Clover are bred and recently the bull had been getting more and more difficult to deal with -- breaking through fences and being a general nuisance. On Friday morning when John was feeding and watering the chickens, the bull was hanging about and generally acting menacing. John wanted to move him and the Jersey Girls to another pasture so he went to get a bucket of feed to toll them through the gate. And since the bull was acting weird, he also got his pistol.  Sometimes a shot in the air works to warn off  critter,

John was leading the cows toward the gate when the bull charged. Pushing through the cows, ignoring the bucket of feed, he hit John squarely in the chest, knocking him through a board fence. John says he was lying there on his back, looking through the broken boards at the bull who looked as if he was ready to come through the remaining board and finish what he'd started.

So, still on his back, John reached for his pistol. Those were the shots that I heard..

This was such a narrow escape. If the bull had knocked him down out in the open pasture, things could have been quite different.   As it was, John escaped with nothing more than some spectacular bruising and the job of getting the 1200 pound corpse on a trailer to take to the landfill.

Life on the farm -- not always idyllic. 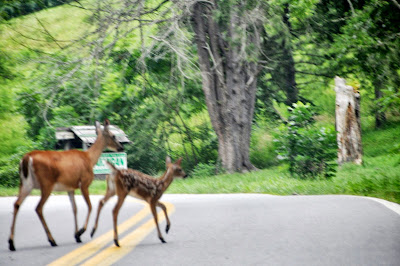 Scary to think what could have happened. As I was reading, I crossed my fingers for a safe ending and breathed a sigh of relief when I read that John was okay. That's a heavy corpse to try to get to the landfill.
Sam

Wow. So sorry to hear this. I bet he is spectacularly bruised. Very upsetting to you both, I imagine.
Such a close call. I hope he heals quickly and without incident. Oh, lovely deer photos!

OMG! What a nightmare! I'm so glad John is all right. And yes, it could have been so much worse. I'm sure there must be a reason you couldn't have used the meat. Would have been satisfying to know you were roasting that bully bull.

Make sure John takes it easy the next few days. Bruising like that takes time to heal.

Glad there was a happy ending--- for you and John, at least.
Deana the queena

omg....wow now that is a bit of excitement.....goodness...i am glad he came through not much worse for wear...and lucky he had the pistol as well...

Goodness! Information I never knew...you can put a bull in the landfill, if you can carry him there! So glad John was thinking of defense and safety

So glad John is OK. That call was way too close for comfort.

Vicki, you just made me realize how terribly lucky Michael was recently with something somewhat similar with a feral pig. I kept telling him that pig was dangerous!

Thank goodness John was okay and had his wits about him to take care of himself! It could have been so much worse!

Butchering the bull wasn't an option. We aren't set up to do that (no cold storage to hang the carcass for the necessary number of days) and the local butchers need advance notice. I hate the waste but there didn't seem to be another option to the landfill.

Holy caca Vicky. Too bad the bull had to be put down, but that is reality sometimes.
We had angus cows and a bull way back when. When trying to load the bull into the truck to take him to market, no loading chute mind you, just jump up in the truck bully, it did finally cooperate. But the parting shot was to kick my husband in the head. Husband flew backwards into the barn, the rest of us were trying to put up the gate on the back of the truck so bully couldn't exit. Husband ended up with 6 stitches in his eyebrow, could have been so much worse.

Aaaaaargh....SUCH a close call! His wise precaution of the pistol handy is typical of the two of you after so many years on the farm. You still have fond feelings about animals ( and people) but you do know their ways are not always benign. Best wishes for fast healing of the aches and bruises to body and mind!

Jeepers Vicki, this does show a different side of country living. Danger zone.

I am so glad that John has only bruising (and a fine survivor's story to tell) after that encounter. Maybe the bull was just being a bull, but....

Your delicately-legged deer are quite beautiful, but even I know that deer have their own other side. Gardens. Ticks. Lyme disease.

Still...what a beautiful set of photographs.

Best wishes to you and John. Hoping you'll have a quiet few days with the kitties to amuse you. And delicious tomatoes to savor. And maybe even some fresh eggs, too.

When we had our farm folks always wondered if it didn't get boring after a while and your account proves that's not true. No matter what you always have to be alert to anything/everything around you, be it your own animals or wildlife.

Geez Louise. Very scary. So glad John had forethought and is OK.

Wow! I am glad to hear that he is okay! That could have turned out so much worse.

Gosh, not at all idyllic. I am so glad John is OK. Sounds like luck was on his side (and a bit of wise forethought).

Thank goodness John is all right! My heart was in my throat as I was reading this. So glad he listened to his feeling that he should take his gun.

OMG poor John! so glad he survived that episode. Vicki, that's two near escapes for you both this year. Be careful now.... you're right, life on a farm is not always idyllic. I'm sure he didn't want to kill the beast either! but he did the right thing given the circumstances.

So thankful he is ok. Our neighbor-with well over 50 years of experience of being a cattle farmer-was killed by a bull several years ago. Like you said there is another side to the farm life that most of us don't think about.