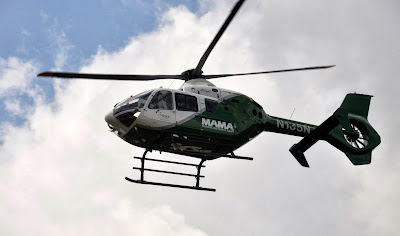 Hurrying (I was transporting ice cream) home from the grocery last Thursday, as I rounded the curve leading down to the bridge I was startled by a strange sound. My first thought was that our lovely new car had taken some kind of fit but then I saw the helicopter, floating down to land in the middle of the bridge. 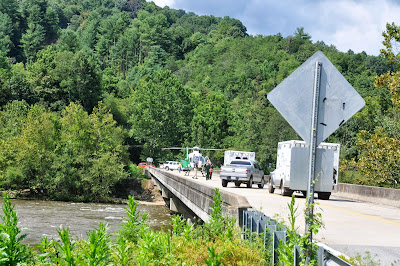 MAMA  (Mountain Area Medical Airlift) can be a life saver for folks out here. 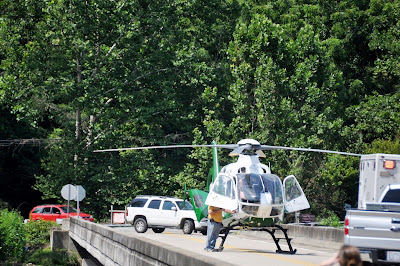 I asked some of the bystanders what was up.  The first one I asked supposed that someone had gotten hurt in the river but pretty soon I was told that a woman living near the bridge has gotten burned badly. Evidently the ambulances came and took her to the center of the bridge to await the helicopter. 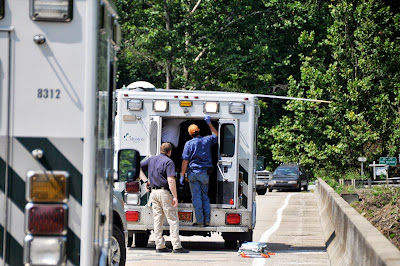 I don't know any more -- not who she was nor what her condition is now. 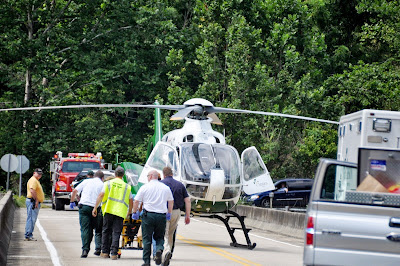 But it was another reminder of how quickly things can change and how fragile our lives are.

And how much we need others. 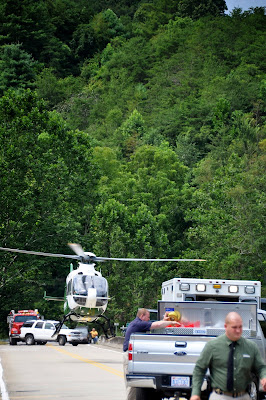 As MAMA lifted off, I hoped that if the poor woman were aware of anything in this awful time, that she felt some comfort from the care and concern that surrounded her, from the first responders to the EMTs and the Big Pine Volunteer Fire Department.

When I find out anything more, I'll let you know. 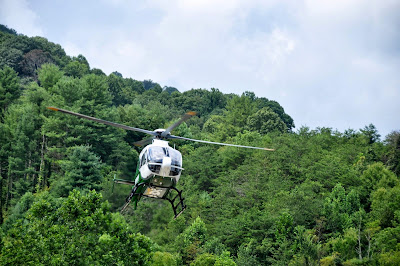 Email ThisBlogThis!Share to TwitterShare to FacebookShare to Pinterest
Labels: MAMA

Thank goodness she was able to get that kind of help and hope she is okay.

We live next door to a school and medical choppers have landed there on numerous occasions. It's still a little disturbing to see one in the neighborhood.

I am wondering who chose the marvelous name "mama!"
A big thank to all life-savers.

Life is indeed very fragile. I'm amazed what wonderful services are provided (by mostly volunteers) in our small towns. There's a lot to be thankful for.

I'm with Therese. I wonder who chose the name MAMA. It's perfect!
Sam

ah i hope for her as well...we do need each other...and at times we need MAMA too. life changes way too fast at times....

In our mountains its a blessing to have such wonderful medical help available. The volunteers give so many hours, not only in helping but in training also, and the helicopters (MAMA on your side/WINGS on my side) are literally life savers.

In our mountains its a blessing to have such wonderful medical help available. The volunteers give so many hours, not only in helping but in training also, and the helicopters (MAMA on your side/WINGS on my side) are literally life savers.

Hope she is okay now. We have these helicopters too and they save many lives - but they rely on charity donations to keep going, which always seems odd to me. (I guess your ice-cream melted? But in the big scheme of things, though annoying, hardly a crisis, as you will no doubt have reflected...)

Vicki, thank you for this post, and your excellent photos, answering a question I'd been pondering. How isolated is the area in which you live? And now I have a much better idea.

Best wishes to the injured woman, and bravo to the volunteers and contributors to MAMA.

What a good thing to happen and for you to record it and share with us. Hope the ice cream survived too.

I felt that way so strongly last year when there was a large fire close by and I saw the long lines of fire trucks going up the road every morning to fight it. Those guys are heroes and I am glad you were able to capture one of the many moments when they help others.

Life is indeed fragile and it is good to be reminded.

I have been just amazed at the dedication of our volunteer fire department and how often MAMA comes to the resue. She landed at the Easter Gap Church a couple of weeks ago.