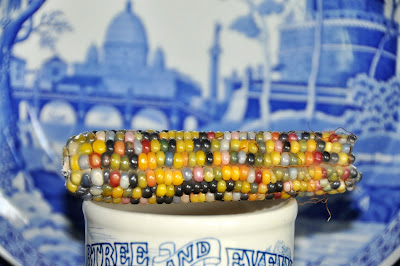 So, you may or may not remember that back in the spring I did a post about some of the stuff I was planting in the garden, including this really neat Glass Gem Corn. I had only nine or ten plants and I've been keeping an eye on them, waiting impatiently for the corn to mature.

The corn stalks didn't make the size of my other corn -- some are downright puny. But unlike my sweet corn, these stalks each had two or even three ears -- small ears 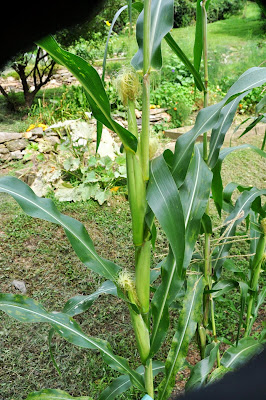 I've been concerned that something would get them before I did and yesterday I saw that the deer had moved in. Deer had been nibbling at the sweet corn and now that it's all harvested, they made a  move on my precious Glass Gem corn, the vandals!

So, in a pre-emptive strike, I picked about half the ears -- those that were almost mature. 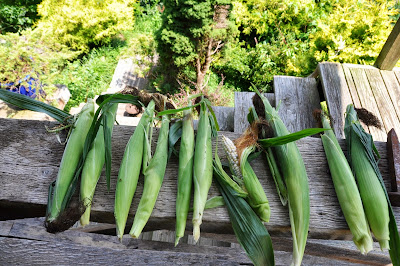 Maturity is signaled by the cornsilk drying up and turning dark brown -- I picked some that were only dark-ish... 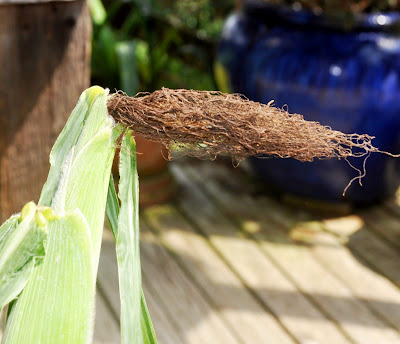 And, oh, the fun of carefully pulling back the shucks to see what the corn looks like! 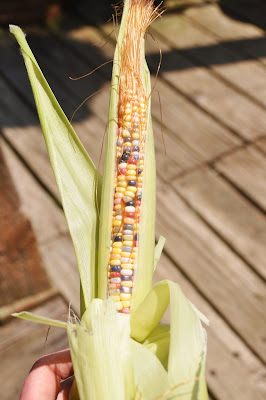 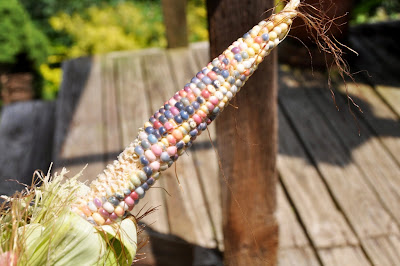 This is one the deer chomped on -- but look at that turquoise shade and see how some of the kernels at the top are parti-colored! 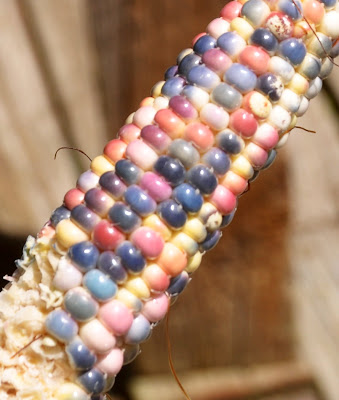 One ear was just beginning to show some color; another was yellow and white, and another (probably very immature) was pure white. 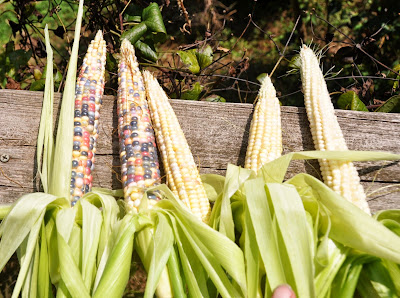 I think that they gain color as they dry -- we'll see. 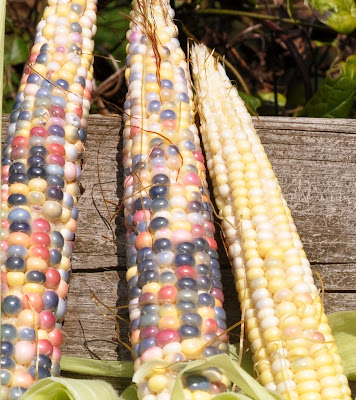 There was one puzzzling aberration --I wonder if it's a throwback to the ancestor of corn -- teosinte?

Talk about delayed gratification! I'm sure I appreciate this corn far more than if I'd just mail-ordered a few dried ears.

In any event, I have some of this gorgeous corn safely drying in my corner cupboard. I'll use some as decorations and save some for seed. If any of you want to give this a try next year, perhaps I'll be able to share (if the deer leave me a few more ears.) But only here in the states -- I think that most countries have stringent regulations about sending seeds.

How does is taste? I did a taste test on one -- at the stage when sweet corn is juicy and, well, sweet, this was dryish, gummy, and very starchy. I'd say that this is a corn suited for making flour or feeding critters.

Or, of course,  for blogging about. 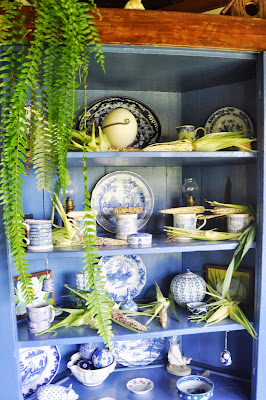 I've been wondering about that amazing corn and hadn't heard anything since you mentioned it in the earlier post. That is so cool looking!!! Glad the deer left you some!

So, will you try it again? I think you should, even if you have to cage it to keep the deer out.

Now, that corn is worthy of the word 'awesome!" I've never seen corn in such rich pastels and brilliant gem colors. Some of them look like pearls! I love the way you've displayed it on your blue corner cupboard. If you were to pop it, does it keep its colors?

and def for showing off...its prettier than it tastes eh?

Victoria is right == it could be popped. But it would be white with just the tiny touch of color from the exterior of the kernel, just as regular popcorn shows a tiny remnant of yellow.

It's so pretty and well worth the wait. I too love the way you've displayed it.
Sam

I am anxiously waiting to see if I have any results. It is a corn for flour not neccesarily for eating but it sure is pretty and looks great in your cabinet.

Beautiful! Love it. I'd say worth the wait. I'm thinking maybe try some popped and see if it tastes good that way. I would be very interested in a few seeds if you have any to spare. I would only need a few as I'd plant it as a ornamental in one of my tiny plots.

Thanks for sharing the pictures!
Tammy

Beautiful! Love it. I'd say worth the wait. I'm thinking maybe try some popped and see if it tastes good that way. I would be very interested in a few seeds if you have any to spare. I would only need a few as I'd plant it as a ornamental in one of my tiny plots.

Thanks for sharing the pictures!
Tammy

Oh, it's beautiful. Perfect fall decoration. (And given the weather it already feels like fall.)

Gosh, it hardly looks real. Amazing. What a pity it's not so nice to eat.

Tammy, I'll save you some, for sure.

So cool looking!
They look like the Indian corn we were buying in AZ. I brought back a couple of them using them as decorations.

How pretty this corn is. What a pity it's not to be eaten, but I guess plants are bred for different purposes.

The corn is so, so pretty. Can you grind some for cornbread?

If you have enough seed to share, I would love a few kernels. The smaller size would be perfect for a corn-lover with a limited space garden.