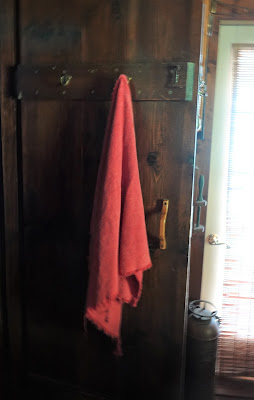 Today is Towel Day, honoring the late Douglas Adams, creator of the amazing Hitchhiker's Guide to the Universe, in which the hitchhiker is advised that a towel is the most massively useful thing a hitchhiker can carry, for many reasons but most importantly because if one has a towel, others will assume that one has other necessities and is a really together guy.

I always keep a towel in the car-- since I don't hitchhike, I don't actually carry one. But towels have been on my mind recently, particularly the supply of towels in our house.

Each of the two bathrooms has a towel bar with a nice clean, fluffy, relatively new towel and washcloth. The doors of the two bathrooms have hooks from which hang more towels, clean, but thin, frayed, and undeniably ratty. (See first photo.) These are the towels in actual use. The nice towels stay unused--except when Josie takes a bath. She is having none of the crummy towels. 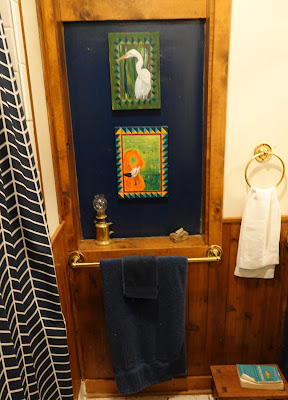 Our linen closet has a stack of unused new towels. So why aren't we using them? 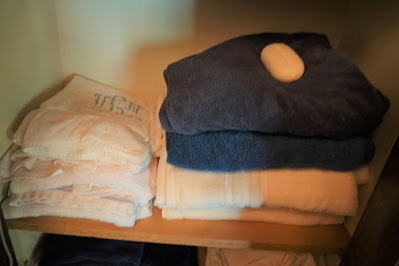 Beats me. But I remember that my grandparents were much the same--continuing to use threadbare towels when there were new ones on the shelf. Is this an old age thing? Inherited frugality? For what are we saving those new towels anyway?

Maybe in honor of Towel Day I'll gather up the ratty ones and put them on the shelf for utility/dog use and break out some new fluffies. Walk on the wild side! Live for the moment! Woo hoo!

When we moved to the retirement community in 2016 we learned that all our linens and towels would be provided so I jettisoned all our old towels. When we left there in 2020 I had to buy new ones. No old towels here except beach towels which never seem to age.

Josie has the right idea! Use the good stuff, give the ratty towels to the dogs.