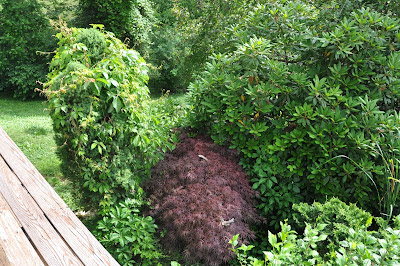 The little fish pool and garden below our deck has become so overgrown that John has taken a chainsaw to the so-called dwarf (over 15 feet, most of them) evergreens and it all looks pretty sad.
In time it will look better. Patience, Grasshopper. We will plant more hostas and liriope--nice and low-growing. The azaleas should make a comeback, with room to breathe now. And nothing daunts forsythia. Thee might even be a spot for some blue salvia.
Coincidently, I recently discovered a bit of writing about the fish pool garden done in the late Eighties. I called it "Zen and the Art of Gardening with Dogs."
Though we have only one dog now (and he's a Very Good Boy,) I still attempt to  to take a philosophic/Zen view of our land as it grows up beyond our control. We' re-wilding and helping to offset carbon emissions.
Or something.
But here's the fragment from back then:

ZEN AND THE ART OF GARDENING WITH DOGS

The dogs have worn a gap in my hedge of white azaleas and green and gold evergreens. They have stomped the Italian Arums almost beyond recognition and are punishing the lavender iris. The Victoria blue salvia around the Japanese maple is a goner too. But—and this is the Zen part—I see that a few flat stones will turn the beaten dirt of the dog trail into an intriguing little foot path disappearing around the golden chaemocypress.

The Japanese-inspired pool garden has been shaped and influence by our dog pack—once as many as six—as have all the plantings in my North Carolina mountainside garden. The red thread leaf Japanese maple began life as an umbrella-shaped (a small umbrella, mind you, the cheapest they had) nursery specimen. That winter Amanda and Arabella (English Mastiffs around 150 pounds each who loved to chew) effectively pruned away all but one side. It looked pathetic but a few years later, the tree had assumed a pleasing gnarled shape.

The girls’ big paws have squashed numerous seedlings in my unfenced vegetable garden . . . I keep the girls out of my flower beds (which they would like to treat as dog beds) by the judicious placement of large attractive rocks—something we have plenty of. . .

And here the writing ends, except for a scrawled note—Too stoned to go on. 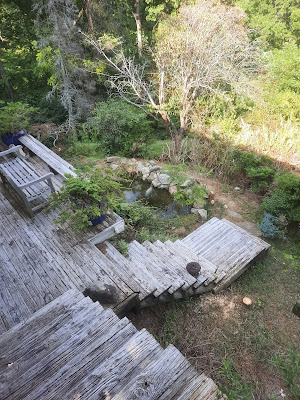 Email ThisBlogThis!Share to TwitterShare to FacebookShare to Pinterest
Labels: gardening

Oh, that last line! I suspect that it will pop up in my memory the rest of the day and have me laughing for joy all over again. Thank you.

Quite a zen story there...stones everywhere, dogs who love to roam and find loam to cuddle into...and the new efforts of a wiser woman and husband to be ecologically supportive of beauty.

Zen and now.
Now and Zen?