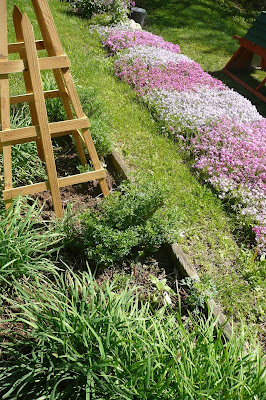 Three virtues -- all in the garden and all in this first picture. That's rue, the little clump at the base of the tuteur; colorful thrift cascades over the wall; and there's honesty, at the top of the photo at the far end of the row of thrift. 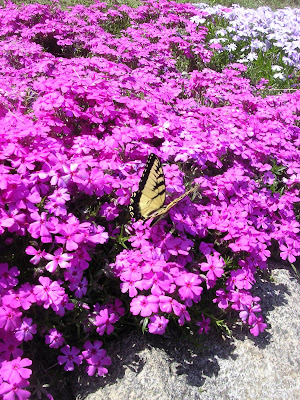 Thrift is the common name around here for Phlox sublata, aka creeping phlox or moss pink. This time of year it's glorious -- carpeting steep banks, covering graves, or, as in my garden, adorning the top of a rock wall. Drought-resistant and tough, thrift will grow in the poorest soils. My neighbor Louise gave me my first bits of thrift, divided from her own plants. "They like to grow over rocks," she said. "Get you some little rocks and oncet you plant your thrift, set the little rocks all round it and hit'll grow like one thing!" 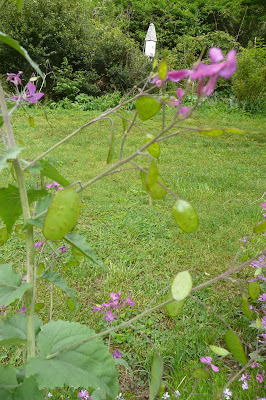 Thrift was first; Honesty came later. Lunaria annua is called Moonwort or Honesty by some, Silver Dollar Plant or Money Plant by others. I'd always yearned after stems of the pearly white disks to use in dried flower arrangement. Then a friend gave me some dried branches from her garden and I sat on the front porch, carefully peeling the brown, mildew-spotted covers off the seed pods to expose the translucent silvery circles. In the process, many a flat black seed dropped to the porch floor to be swept away by late summer breezes.

Now, about ten years later, the purple flowers of self-sown Honesty trace a path from just below our front porch , down the hill in purple battalions to the barn, and on down the road into our neighbors' property. Those cheerful clumps of purple are everywhere -- lovely jolts of color accomplished with absolutely no effort in my part.

And there's something to be said for that. 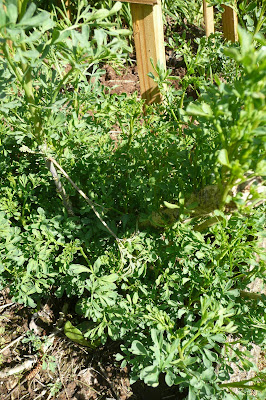 Rue -- its formal name is Ruta graveolens -- is an odd little herb, poisonous to some, strangely strong-smelling, and said to repel fleas. Later in the season it will show some small, not very exciting yellow flowers. I've never tried to use it for anything at all. Rue is in my herb garden because Shakespeare called it Herb 0' Grace and I'm a fool for names like that. And because Elizabeth Goudge wrote about a lovely old inn with that same name.

Rue is also said to exert a strong protective magick -- and that seems like a good enough reason to keep it around.

I loved learning about these plants Vicki - I had no idea of their histories. Thank you so much for visiting French Essence, xv.

Beautiful virtues, Vicki! I think honesty is what we call Judaspenning or in English Judas coin, because of the silver disks.Thanks for sharing and for your comment.

A beautiful garden and great pics... thanks for educating us on these gorgeous plants.

Thanks to all of you for stopping by! And especially to Reader Wil for teaching me another name for honesty.

BB - I've been following your adventures with woad over on your blog and am definitely intrigued. Where did you get yours?

Thank you for those beautiful pictures. I'm just learning about herbs and struggling with recreating my garden..torn up by a overzealous
bobcat (mechanical variety) Love your books! See you on June 10 at the library

Thanks for stopping by, Holly! Herb gardens are so satisfying -- sight and smell and taste. And sometimes starting over leads one down new and more interesting paths. . .

I look forward to seeing you at the library!