Good Grooming for Dogs and Cats 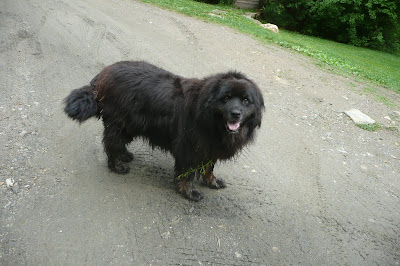 A thing of beauty is a joy forever. This is Bear (the inspiration for Elizabeth's Ursa) as she usually looks --a wet and muddy undercarriage and bits of nature clinging to her fur. Very soon she'll be getting her summer haircut -- I usually just work at it over a period of days with our hair cutting scissors but last year I invested in an electric clipper.

It still takes a while but the result will be an attractive summer-weight Bear with all the interesting dreadlocks gone. 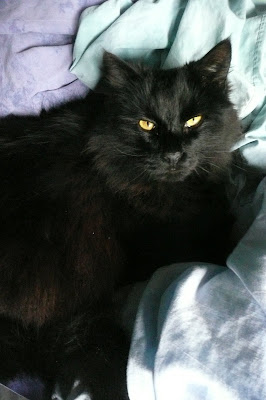 Eddie gets the occasional dreadlock himself, usually back on his hind quarters but one approaches him with scissors at one's own peril. And electric clippers?

He will, however, allow the dogs a certain latitude. 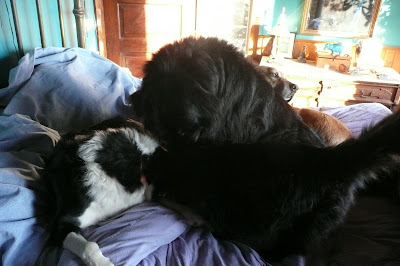 Though he rarely washes himself, Eddie loves to lick the dogs' faces, hoping that they will return the favor.

Maggie looks away, wondering why we allow so many uncouth dogs om the bed. 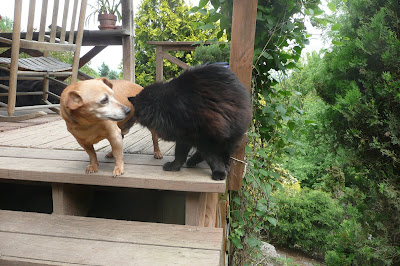 Bear is the only dog that will actually bathe Eddie. She probably mistakes him for her own.

The idea of cat fur in his mouth is appalling to William. He's not thrilled at the idea of being licked by a cat larger than himself either.

Good morning,
thank you for adding at least two more things of beauty to my day, such lovely sweet creatures!
It don't know what it is with dogs, but they just make me melt at the sight of them.
We have a long-haired dachshund, Maxie, I have got some pictures
here. He rules the family. ;-)

Our animal children provide lots of entertainment don't they?
I need to groom my two yesterday.
Maybe I'll get it done this week.
Jake stays mad for three days afterwards, you'd think it would feel better to him!

Merisi, What a romantically handsome gentleman Max is! He must surely be a poet.

Carol, I can't imagine life without pets; they are, indeed, endlessly fascinating.

Great pals, obviously. I like looking at their pictures. You have many pets, it seems?
Blessings, Star

That Eddie is one of a kind! I love his mug! What a great group of critters you have.

Hi, Star -- Six dogs and two cats is the count --what were we thinking? But almost of them are rescues of one sort or another.

Christie -- He is Some Cat!

Awww. Bear is such an appropriate name.

Suits her right down to the ground. And when she sleeps,which is often, it's as deep a sleep as if she were hibernating.

They are gorgeous! *smiling*

Vicki, can you give me Sheila Kay's contact info? She has just been named this year's Ragan-Rubin winner by the NC English Teacher's Assoc. and Nancy Posey is trying to reach her.
Yes, I agree good grooming works wonders. My mutts could use some.

Terrific about Sheila Kay! I'll send you the info in an email.

Cute example of "friendship"!
I love your posts and photos (even that of the snake ...brrr...
I added a link towards Daniel's surprise.

Miss Yves -- I'm glad you enjoy the photos -- even the snake! (That was a no comment post -- I'm afraid not many share my admiration for these amazing creatures.)

I really enjoyed this post. :-) Eddie does look like he and Bear are perhaps related. He just has attitude written all over him. I need to get Ariel (the collie) sheared or trimmed or something. She doesn't shed out much anymore and gets all matted. It's a task I dread, so I put it off....
Tammy (do we get to see after pictures of Bear??)

Hey, Tammy -- I haven't done Bear yet. For one thing, she's always slightly damp, coming and going in our daily rains, and for another, I have to get the clippers back from my son who has borrowed them to give himself haircuts. But when I finally do, I'll post a picture!