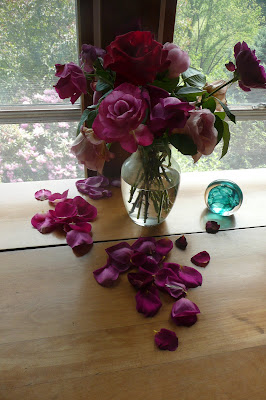 Gather ye rosebuds while ye may,
Old Time is still a-flying:
And this same flower that smiles to-day
To-morrow will be dying.
. . . from "To the Virgins, to make much of Time" by Robert Herrick 1591-1674

I won't go on -- the poem is actually pretty depressing, especially for one such as myself, well past middle age unless I expect to live to the overripe old age of 132.

But I love the way the roses that Nancy brought on Mothers Day are so gracefully giving up the ghost and those lines of Herrick's keep echoing in my mind. 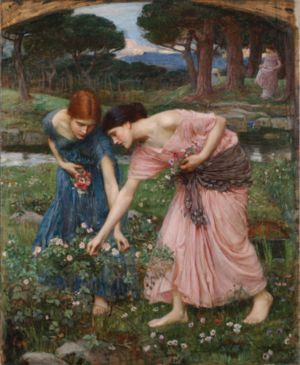 And, though neither young nor a virgin, I'm still busily gathering all the rosebuds I can -- every day. There is so much to treasure all around me and so much more out there in the world. . .

Including these lovely pictures by John William Waterhouse, a British Pre-Raphaelite who painted them in the early 1900's. I adore the Pre-Raphaelites though modern taste probably dismisses them as overly sentimental -- and so they are.

I like a lot of corny things -- raindrops on roses and all the rest of it. "The Little Drummer Boy," the Cotswolds, kids hunting Easter eggs and parents taking pictures of them, I Can Has Cheezburger . . .

Are there things you like -- even though you suspect that a lot of people think those things are sentimental/silly/ dumb . . . or corny? 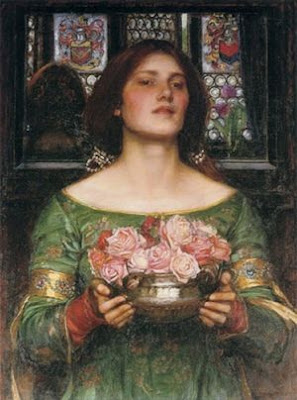 Yes! All the Sound of Music songs...whiskers on kittens...warm woollen mittens.

Darn. Now I'm going to have to put the CD on.

yes, all that and kind words, which are thoughts brought to life. Can't be too sloppy or sentimental for me.
Blessings, Star

Willow, just be glad I didn't mention "It's a Small World After All" from the Disney ride at D-world. It kinda made me teary-eyed yeaars ago but then I imagined the gondola we were in breaking and being trapped in there with tiny manikins singing that song over and over in their creepy little voices -- the horror! the horror!

Star - "Kind words are thoughts brought to life" -- a lovely rosebud of an image!

I've always loved the series of "Maida" books by Inez Haynes Irwin, starting with "Maida's Little Shop." My Mom read them as a girl and as soon as I got old enough I read them too. Of course, now I have to read them with a certain amount of detachment, given the problematic depictions of African-Americans. It's hard to still love books from childhood that have these perspectives...but they are lovely stories.

Estaminet, I need to find these books! Never heard of them but probably I'd like them.

I have quite a few embarrassing pleasures in reading, most left over from my childhood -- Angela Thirkell (racist, colonialist,) Gene Stratton-Porter (jingoistic, racist, paternalistic,) Mary Poppins -- the original ones before they changed the different ethnicities to animals, Robert Heinlein -- appalling sexism -- I'd better stop before the PC police come after me.

The "Maida" books have become ridiculously hard to find and very expensive to buy in the past ten years. I know, because I've been trying to collect them, along with lots of people. However (I don't know how you'll feel about this) you can read several of them online, including the first of the series. I discovered this today...

Excellent! I'll look into it!

Just came across a comment by you, over on Vicki Archer's 'My French Life' blog. Her entry on being "well in her skin." Actually re-visiting that entry. It's sooooooooooo intriguing, for this 'Woman Of A Certain Age.'

Don't you just love that phrase?!? It covers so much territory. And I use it, even though I'm surely beyond the intended age limit. -grin-

But I too, am continuing to try to gather rose buds. Even while not quite able to plan out, how to live these remaining years.

Oh I'll live them, as random fate decides. But I mean, who to look to, for role models. Guess that says it better... -sigh- Who to look to, knowing they project the same persona, which would make me happy, projecting.

I probably haven't really worded this correctly. But somehow, I think you'll get an inkling of what I'm trying to say.

Oh, yes, Aunt Amelia -- I think I know just what you mean. I've been looking for those role models -- at least since I turned fifty.

There are a few out there, of the type I admire, but not many. Possibly that's why I write the kind of women I do -- the role models in my head.