The Kingdom of the Happy Land. . .

Justin and Claui prepared brunch (shrimp salad sandwiches, salad greens from their garden with goat cheese, pears, and almonds, and a blueberry/strawberry shortcake with whipped cream and ice cream.) Ethan and Aileen brought champagne to mix into Mimosas or Bellinis and Nancy (Claui's mother), Josie (honorary aunt whose children are far away), and I basked in the glory of it all.
. 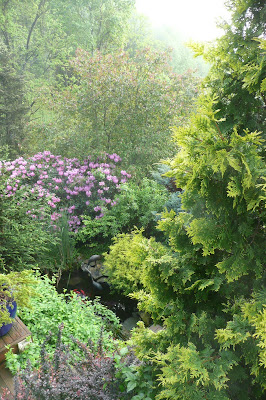 After lunch we three mothers moved to the porch to bask in the sun of a spectacularly beautiful day while listening to soft jazz and the charming sound of dishes being washed by someone else.

And my thoughts turned to the story Gary Carden told me of the Kingdom of the Happy Land. 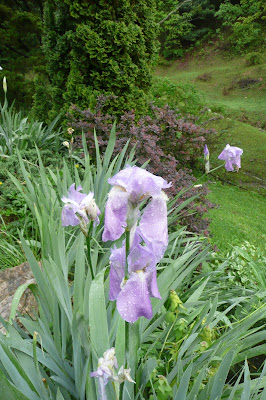 It was just after the close of the Civil War, high up on a knoll in Henderson County, that a band of freed slaves, some of whom had walked all the way from Mississippi, set up the Kingdom.

Ruled by King Robert and Queen Louella, the settlers built cabins, cleared fields, and set up a community in which all shared in the work and the profits.

They farmed, concocted and bottled a liniment that sold well, hired out as laborers, and many of the men worked as teamsters, hauling freight on the old Drovers' Road . . . and suddenly I realized that this story could come in handy some day if, as I'd like to, I do a book about Ish and Mariah, the Melungeon couple from Dark Season. 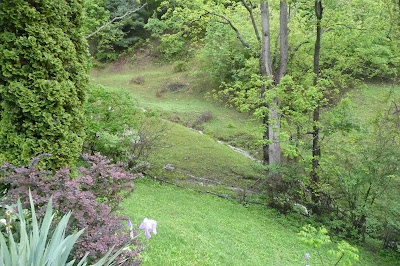 The story of the Kingdom of the Happy Land is a fascinating bit of North Carolina history and if you want to know more, go HERE.

Or over to Gary's post a while back -- which includes a map! 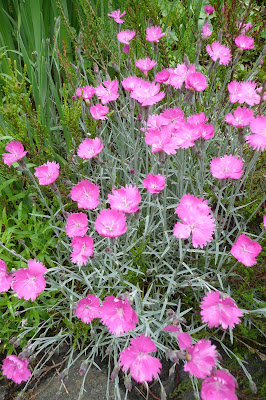 That is a fascinating story. So many of these bits of history can be lost - I would love to hear from one of the people who lived there back when.

What wonderful pictures - I feel like I was there with you. I know I could have polished off those shrimp salad sandwiches and the salad with the goat cheese. Hope you had a wonderful mothers day.
Sam

Karen -- I was enchanted by this story and really hope to do something with it eventually.

Sam -- Of course, it would have been nice had I taken pictures of the table and the food -- which were beautiful -- but as with the chocolate pie a while back, greed overcame forethought.

Pleased to see that you are seriously considering Kingdom of the Happy Land
as a departure point for your novel.
For what it is worth, I will have an article coming out in the summer issue of Smoky Mountain Living about the Kingdom. Also, there is a map that was taken from a little 28-page
pamphlet by another Hendersonville historian, Sadie Smathers Patton. I posted it on my blog a while back and you are free to go cut and past it. Also, I talked to Louise Bailey and she added some fact that I didn't know. So did Robert Morgan who had found reports of the development of a "cult" at the Kingdom.
Gary

Thanks, Gary! I just added a link to your post and the map.

Yes, I'm seriously considering making this a part of the next proposal I send my editor -- about a year from now(if nothing don't happen.)

What lovely pictures and sounds like you had a nice Mother's Day. Everything is SO green here and all my flowers are really showing off and my garden stuff is really happy. Up until yesterday, which was a beautiful day here too, we had had 15 straight days of rain, but I'm not complaining as we need as much as we can get after our past extremely dry summers.

Hey, Pat, Such garden stuff as I got planted is thriving -- but now I need to get in my beans and corn and squash and maters and cukes . . . but not today -- more rain. For which, like you, I am truly thankful . . .