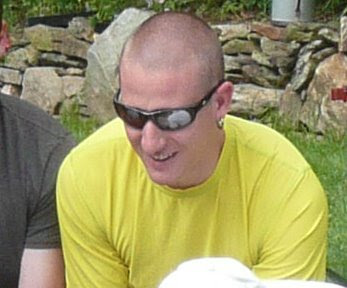 I call him my 'other' son. Cory's been a part of our life since he and Justin became friends at NC School for Science and Math. They were room mates through much of Chapel Hill and now that Cory and his girlfriend live in Asheville, they are out at the farm on many a weekend. And I am shamelessly taking advantage of his computer expertise.

Yesterday he helped me get set up with SKYPE so that I can have a video call next week with Karen B.'s bookclub -- in New Jersey. Such fun. Last night I did a trial run with Karen and she and I just sat there staring at each other on our computer screens and saying, "This is so cool."

Cory is also a terrific professional photographer. That's something else he does on his weekends out here. For some wonderful closeup shots of bugs and flowers, check out his website. There is a luna moth of such beauty . . .

His shots make mine (below) look pretty puny. (I'll excuse myself by saying that he has an MFA in photography from Savannah College of Art and Design, plus a really spiffy camera.) 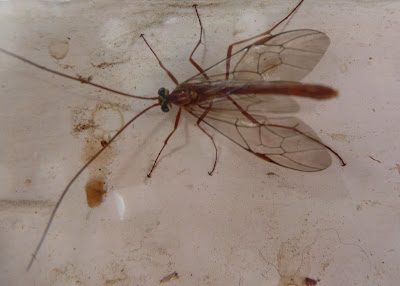 When Cory and Justin were rooming together at Chapel Hill, Justin commonly availed himself of Cory's always superior computer equipment. But then came the terrible morning when the printer jammed as Justin was trying to print out the paper which was due in a class starting in about ten minutes.

Cory to the rescue! "Go to class," he said. "Sit by the window," he said and Justin took off on a run, sliding into a seat by the window just in time to answer "Here."

Roll was taken; the professor spoke of this and that and at last began to go up and down the class collecting papers. On either side of Justin, classmates were raising their eyebrows, noticing his entire lack of a paper to hand in.

As the professor reached the desk just before his, Justin put his hand out the window.

And in one smooth flourish, retrieved the freshly printed paper from his unseen benefactor and presented it to the (no doubt) puzzled professor.

Everyone needs a go-to computer guy. 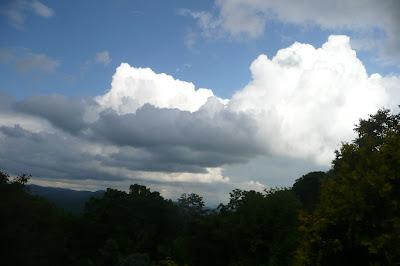 Cory sounds like quite the guy, and WOW, what great pictures on his site! The story of Justin's paper was just too good ... whew!!

Those are absolutely amazing photographs. I love the smoke series and the charming gecko in miscellaneous. Thank you for sharing those with us.

And I do most sincerely hope I will think of something more interesting to say on Friday than that was so cool. It'll be morning and I'll have had some coffee so we can only hope!

Pat and Kay, So glad you checked out Cory's site. I love his photos!

And Kay, I'm thinking that by Friday, the novelty of the technology will have worn off and we'll be able to have a more adult and bookish conversation.

Oh, Vicki - Cory's photos are breathtaking. I swear - I find and learn the coolest things from your blog! thank you!!

p.s. - I had no idea Sharyn McCrumb was working on a new Nora Bonesteel novel! I am over the moon!!!!!!

Vicki..it would not let me view his site! It said I was not authorized to view this site, then I tried to go to from the ULR and it said this site unavailable!
Love the story about Justins paper!

Kaye -- What Sharyn told me is that Nora is in the novel as a young woman but the novel isn't about her, per se. That was a while back; things may have changed.

Carol -- give the link another try. It works for me and for others.

You are right - everyone needs a computer guy. Yours is cute too.
Sam

I am a eejit! Vicki - I meant to include this link to Sharyn McCrumb's news (sorry!!)
-
http://southernauthors.blogspot.com/2009/05/sight-nora-bonesteel.html

Yes, he is pretty cute once you get used to the shaved head. My very favorite thing about him is that once when I ran into him out and about with his boss, Cory introduced me, not as 'Justin's mother' but 'this is my friend Vicki.'

Thanks for the link, Kaye. This is pretty much what S. told me but she made it clear that the novel wasn't 'about' Nora. Wonder if she's given her a bigger role -- due to popular demand? Nora is certainly my favorite.

I just had a late night consultation with my computer guy, my 22 year old. He made some suggestions and will pick up and install my additional hardward next week. What would I do without him?

My younger son is the one who showed me how to use the computer and sat with me as I fiddled around with Word so I could write my quilt book. It's an enormous task, teaching an old dog new tricks. ;-)

What a great story and the sky photo is also very impressive! Thanks for sharing! Have a great weekend, Vicki!

The skies are endlessly fascinating, aren't they>

yes, Cory is cute, but my Cory (daughter) has never quite forgiven us for calling her Cory (Corinna) because so many boys in her class were Cory's. Why did you give me a boy's name? she wailed.

I think I know Two female Corys to one male to me it's a gender neutral name.