The Fox is on the Town-o 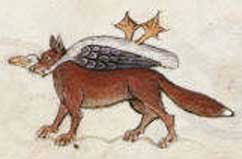 Fox went out on a chase one night
Prayed to the moon to give him light
He had many a mile to go that night
Before he reached the town-o . . .

You've all likely heard that folk song. It dates back at least to the Middle Ages in England, if not farther. The fox comes to the farmer's pen and grabs the grey goose while Old Mother Slipper Slopper sticks her head out the window and hollers for her husband, "John, John, the grey goose is gone and the fox is on the town-o!"

Well, this time it was chickens, not a goose, and old Mother Slipper Slopper slept through the whole thing. John, however, awoke to a great commotion below and took off down the road to the chicken house where he discovered that the Great Chicken Massacree had taken place.

There were eight corpses lying about, a hole dug under the fence, and feathery evidence of a body's being carried off. John took the truck down the road to where we have suspected there is a foxes' den and sure, enough, there he/she was, toting a deceased chicken toward the pile of rocks where, presumably, "there were the little ones, eight, nine, ten." 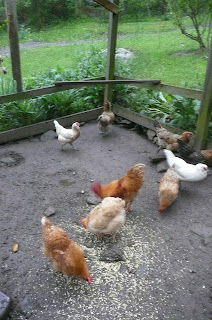 So the tunnel under the wire has been filled, the chicken wire reinforced, and now we close the chickens in their house every night. A pain, but necessary.

We still have a fair number of chickens. As luck would have it, most of the victims were the old girls, some of whom had pretty much quit laying. And Gregory Peck, the rooster, died, doubtless defending his harem.

We've taken advantage of this change in the status quo to shift birds around. Justin's chicken tractor had three full-sized birds - a young Buff Orpington hen and rooster and their mother. Unfortunately the younger ones were driving their mother crazy (teenagers!) so we brought them all up to our chicken house where the young rooster will have other things to think about and Mama can have her space.

Meanwhile, in our chicken tractor, the Brassy-back Bantam rooster had taken against the two Brassy-back hens, preferring the company of the evidently more interesting Dutch Cream hens. So the poor Brassy-back girls stayed in the upstairs apartment most of the day, moping, reading romance novels, and writing bad poetry.

Not anymore. They've been moved to Justin's chicken tractor where they seem much happier. We are hoping someone will go broody as now we could use a few more banties -- maybe a nicer rooster for these two... 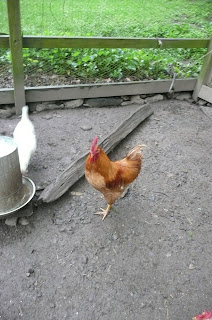 The young Buff Orpington rooster is a handsome devil. His tail feathers are just starting to sprout but his color is magnificent. Justin and Claui tell me that his name is Reginald Dukakis.

And Reginald's once down-trodden mother has quickly gone to the top of the pecking order in her new home, kicking butt and taking names, as they say. (She's the large buff-colored hen in the center of the picture above.)

Meanwhile, Brer Fox is waiting, raising up a gang of little foxes. We've been delighted at the occasional glimpse of the foxes -- such beautiful creatures. But a slaughter like this -- eight or nine chickens in one night
-- seems . . well . . . excessive. 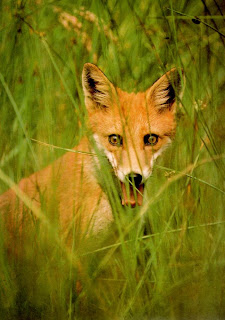 Sorry to hear about the chicken dinner for the fox family. But I did get a big chuckle from the name Gregory Peck!!!

I just opened your lovely quilt book a few minutes ago. Can't wait to sit down and browse through it! :^)

Aw nature.....This was a wonderful post in spite of the murder for food taking place. Lucky you to get to watch baby foxes at play!
Carol

Willow -- Hope you enjoy the quilt book. Yes, all of our roosters have been named Gregory Peck -- except this latest one who'd already been dubbed R. Dukakis.

Thanks, Carol. The foxes are gorgeous but I'd rather now that they played a long, long way from our chickens,

Wow Vickie, I'm sorry to hear that this happened. Eight chickens is way over the top and would have been very sad to find. That would have pretty much wiped out my flock. I'm glad you were able to work it to your advantage with moving the other chickens around and hopefully you'll get a broody hen. I have to shut my chickens up every night, because the outer pen isn't predator proof(actually there isn't much LEFT of the pen, thanks to the sheep!). If I didn't the 'possums and coons would wipe them out within days, I'm sure. Heres hoping the little foxes stay far afield from your flock.
Tammy

Hated to hear of your chicken massacre ... it seems if it's not one thing it's another and a person really has to be on their toes concerning wildlife vs farm animals.

A couple of years ago we had a fox family in our woods and it was fun to watch them ... Mom/Dad would sit in the woods and watch us doing our work and the babies would play on rocks and downed trees and put on quite a show. We thoroughly enjoyed them. Now we see them passing through from time to time ... quite a treat.

Yeah, we just have to be smarter than the foxes.