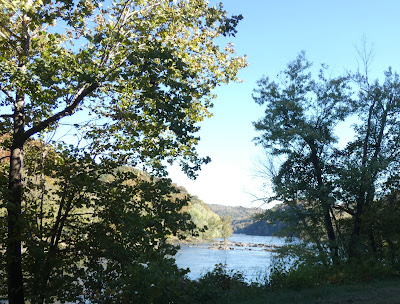 The river is much lower than usual, and I stopped to take a picture of these rocks. We were told of a great drought long ago during which a man could cross the river here dry foot. 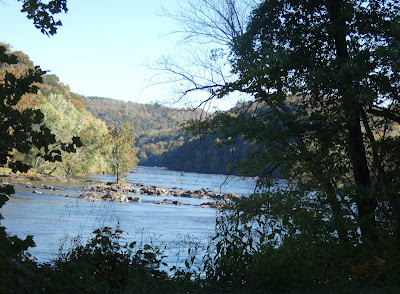 And this place was in my mind when I wrote a scene in The Day of Small Things--the story Birdie's grandmother tells her of John Goingsnake escaping the troops that were marching the Cherokee people to Oklahoma--The Trail of Tears. 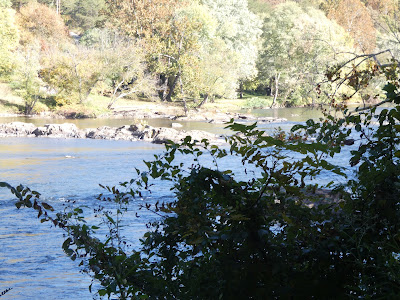 “Did John Goingsnake cry?” I ask though I know the answer. I am about to cry to think of the poor Injuns.

“No, he did not, though he had loved his Nancy better than ary thing. He sat there with one hand on Nancy’s cooling face, holding his sleeping baby and looking out across the river that was shining silver in the moonlight. It was the fall of the year -- a dreadful dry season. He could see the rocks of the river just a-sticking up, looking most like stepping stones all the way across the water. And that gave him an idea.

“’Nancy,’ says he, speaking low to her spirit which he knows is still about, ‘I mean to stay here in the mountains with you but to do that I’ll have to leave you to be buried by these others. If I get away, I vow I’ll come back when it’s safe and sing over your grave.’

“And with that, he picked up the babe and strapped her to his back. She stirred and whimpered but didn’t wake, just drooped her head down heavy on John Goingsnake’s shoulder. All round, folks was sleeping hard, wore out with the walking they’d done.  Even the soldiers who was meant to be keeping guard was setting down, dozing by their campfires.  Then, quiet as a hunting cat, John Goingsnake creeps to the water’s edge and steps out onto a rock. The moon is making a path for him across the water and he hears a singing in his head as he steps to the second rock and then the third.”

“Well now, John Goingsnake, he stood there in the middle of that broad river, wondering what to do. He could see rocks like stepping stones to the other side but betwixt him and the next rock there was a stretch of deep rushing water. He studied the distance and knew it was too far to make a leap for. ‘No telling,’’ thinks he, how deep the water is here in the middle where it runs all the year. Strong as it’s raging through this narrow channel, I fear was I to try to cross, the child and me would likely be swept away. Though,’ says John Goingsnake to hisself, ‘if me and the babe was took by the river, why then we’d be with Nancy. Could be that’s the best thing for us.’

“On his back, the baby stirred and made a little sound like she was a-feared, a little whining sound, and John Goingsnake stood there thinking on the meaning of that sound. A cloud passed over the moon and a hoot owl called and he studied on the meaning of them things too.”

Granny looked over at me, real solemn. “That’s how Injuns do; they look fer meaning in everything they see or smell, everwhat they touch or taste or hear. And being as John Goingsnake was a Cherokee wise man, he was uncommon good at knowing what the world around him was saying. But just then, standing there in the middle of the river on that long ago night, John Goingsnake was plumb bumfuzzled.

“And then the moon come out and he looked down at that stretch of water at his feet and he was dumbstruck –for right there in front of him, where a minute before hadn’t been nothing but fast-moving water, there was a great flat rock with the water curling around it. Without stopping to think, John Goingsnake stepped onto the rock. And then a quare thing happened – the rock begun to move." 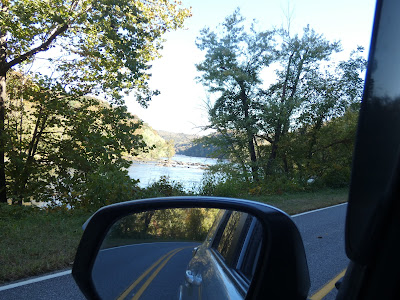 We are left high and dry or is it low and wet.