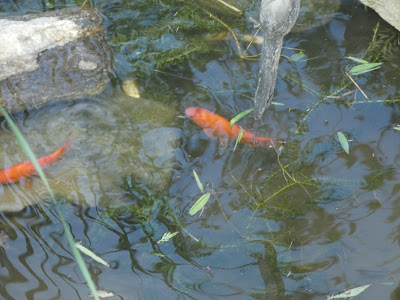 Sitting out on the deck with John and our adult beverages, I was mesmerized by the goldfish. It's always challenging to count them--we think we have eleven gold and two or three dark ones,
But as I watched them darting about, a very old memory surfaced.
I was very young--maybe six or seven--and was enrolled in ballet classes at Gail Armour's dance studio. (More about Gail HERE) The studio was one wing of a house that wrapped around a big goldfish pond and we students walked beside the pond and the silent circling goldfish to get to the studio. The other wing contained a costume shop that seemed to do a thriving business.
I loved ballet--the wonderful sound of the commands -- plie, tour jete, arabesque--and to this day I remember the five positions of arms and feet.
But I was and am an awkward sort and lessons stopped before long. (There was a recital in which I was one of three Green Pea Fairies and I got to wear a tutu!)
The memory that came to me yesterday was from over seventy years ago, but I can still see it. I was outside the house, maybe waiting for my mother. A car pulled up and a tiny woman emerged. She seemed to have been cut off at the waist and the garment she was wearing was a kind of sack ending in a leather oval. Her hands were on the ground, and she propelled herself up the walkway, swinging her body between her arms, toward the costume shop.
I can't remember if I ever told anyone about this. So much in the world is strange and inexplicable to young children. But when the memory came back to me, I did some online research and discovered Jeanie Tomaini--born without legs, a longtime circus/sideshow attraction who lived in Gibsonton, near Tampa. So, there she was, coming to the costumers who could deal with her special case and making an indelible impression on me.
There's more about Jeannie and her husband Al Tomaini, the Giant,  OVER HERE. 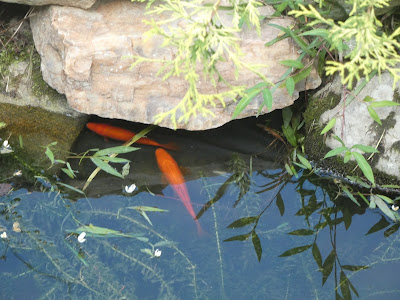 What an amazing memory! And what a sad thing that people like Jeannie and her husband have ever had to survive by being freaks in a sideshow. Thanks for the link to the story about them.

Great memories of goldfish ponds and that woman! Thanks!

It’s amazing what can surface when the right button is pushed.