Esmeralda and the Brown Brachet 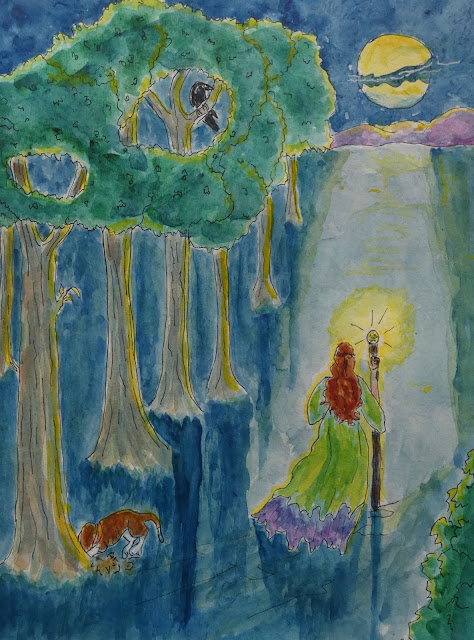 As I worked on this, I realized there must be a story to go with it. Here's a beginning--both story and picture need some work--but I have more pictures and more story in mind. (A brachet is a small, noisy hunting dog.)

ESMERALDA AND THE BROWN BRACHET

Clearly, the brachet had been a mistake. But when, on the third lonely day of her quest, the little hound had popped out from behind the Standing Stones of Glarn, Esmeralda had greeted it with joy.

“Hail, O brachet! Art sent to accompany me, mayhap as guide and guard?”

The skinny brachet had fixed her with a penetrating gaze which dropped at once to the leathern pouch at her side.

“Art hungered, little one?” Esmeralda knelt down before the brachet and reached into the pouch. “Gladly will I share of my simple provisions.”

Two wheaten rolls and a twist of dried venison disappeared, and the brachet moved closer to nose at the pouch. Esmeralda reached out a hand to stroke the dog—no, this was a bitch, to be sure. “What a pretty maid thou art, with thy white stockings and elegant long ears.

The brachet had accepted the caress with a philosophical sigh. There will be more food, she reasoned; in time the fragrant bulging pouch will be at my mercy. The woman is desperate for companionship. Look at her crouched there, cloak spread on the ground, face imploring. If she had a tail, she'd be wagging it.

The brachet had allowed herself a tiny whine and, swallowing her pride with the last morsel of bread, had licked the young woman’s hand. There, done and done.

“Come out of it, you wretched brachet! Leave it, I say.”

“When the crystal is set alight by Luna’s beams, then must thou follow the path she shows,” the aged Sooth-Seer had whispered. “Follow it even as an arrow from a bow if thou wouldst find the dungeon where the true prince lies.”

Esmeralda drew in a deep breath and limped ahead. Just a few more paces and she would be clear of these dark trees. She could just glimpse a clearing ahead and sense, rather than see, a burgeoning glow.

The brachet continued her frenzied excavation at the base of a grandfather tree as Esmeralda stepped into the moonlit glade and held aloft her crystal-topped staff.

I love this. Please keep it going.

Way to go Vicki!! You are now a writer/illustrator! What fun to put your two talents together! Waiting for more...

Love this Vicki. The brachet is just like our Jenny. She is a working cocker spaniel and would fit perfectly into your story :) Please keep writing the story.

That is a lovely beginning! I, now, too await breathlessly your next installment!