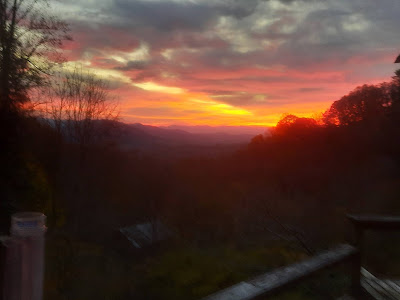 Whew! Jenny is a handful. Her potty-training is rather imperfect therefore I'm taking her out Very frequently for little walks. And I'm up before the sun these days, hoping to forestall an accident. I don't dare let her off leash yet--certainly not till the collar with her name and phone number arrives. However, a few days ago when I wasn't watching, her lash broke (she'd chewed through it) and she was briefly free, running in circles like a madwoman.
She did, however, come to me when I called, which is a great relief. She knows her new name and responds to Jenny--about as well as Josie responds to my demands, which is to say, eventually. In fact, the two have a lot in common, wanting what they want NOW, needing constant attention, wanting to eat all the time . . . at least Josie's housebroken now.
On the up side, this regimen of frequent walks (including middle of the night forays) and dealing with a long leash and my walking stick are, I think, acting as a kind of physical therapy. It's been not quite a week but I actually feel a bit stronger and more limber. (Needs must.)
The cats will have something to say next week, if I can get some pictures.
Oops, while I was writing this, I became aware of a chewing sound. Jenny was eviscerating a throw pillow . . .
No, Jenny! 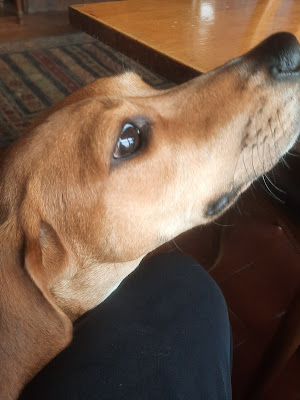 I have to say, Jenny has a beautiful sweet face. Amazing that so much mischief hides behind it. :-)

Right now, I couldn't deal with the needs of a dog, especially a young one. But I am sure, you will soon have a wonderful companion.

You have your work cut out for you. Not my cup of tea though.

We've always had dogs and I knew what I was in for when I chose a young hound. she'll improve and she is a sweetie.

I couldn't restrain from smiling at reading your post. At least we had a huge crate for our two labradors with newspapers on the floor for the nights while they were in training... then one day... everything was in control. For Josie it will be different.

She's a baby excited about her new home. Have you thought of using strong, long rope attached to a tree to let her run? assign Josie to unwind her periodically. Josie could run with her, one way around then back the other. Fun for both!
Looking forward to the feline input!

You sound very experienced in this phase. She’ll soon settle - early days yet.