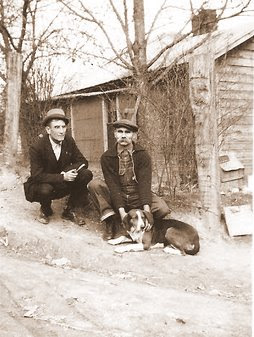 I really enjoyed this Vicki, am looking forward to reading more of it.......:-) Hugs

I like the way you "paint" a situation with words! There's a peaceful atmosphere in the beginning of your story, then a certain expectation of something that's not quite right creeps in it. Who is the stranger, where does he come from, what are his intensions... It needs more reading about him, Vicki!

I love the story and can't wait for more!

wow. what an intriguing and thought provoking tale...hope you have a great saturday!

Wow. This is such a beautiful tale. Loved the way you put it up...:)

Totally hooked. My husband loved it, too. We both compliment you on your research/knowledge of the gold confiscation in 1933 by Roosevelt.

So very well done again!!I am so glad to be back for a bit and to read your posts. I read through that twice, ands will be interested in the rest of the story. The photo and the description of the man "hunkering down" in that squat reminds me of my Uncle John who'd squat like that anywhere; to me that is not doable nor comfortable, but Uncle John did it forever, said he never needed to wory about a chair because he had his squat always with him.

I love the story already. Your wonderful descriptions allow me to see the characters vividly in my mind. Isn't that what a great story is all about?

Good work, Vicki! You caught my curiosity in a big way. It's a fine photo, too. I can see why it fired your imagination.

Thanks,folks. I started this story some time back -- really need to finish it. I know what's going to happen -- just have to get the words in the right order...

"I figured him for a preacher man"...this first sentence reminds of me the wonderful movie:"the night of the Hunter"
...and the title, Leonard's Cohen's song:
"You my love , you you are the stranger""and now another stranger comes..."and so on

And with your intriguing beginning, this plain (but beautiful) picture seems very strange: This is an exemple of the famous "koulechov effect"!

You have the gift of wonderful story-telling. Your words evoke an intriguingly real pcture of the man in the photo. I could actually hear him as I read it. I hope you post the rest!

I love this story. What a wonderful writer you are. You create that element of suspense that always makes a reader want to keep reading. I have you on my list for my next trip to the library.

Great start, I need more. Your writing is superb!!

I am impressed with you non-native English speakers who can make any sense of this piece as even those in the US may have trouble following the dialect.

And Miss Yves, I didn't know about the Koulechov effect -- but thanks to M. Google, now I do! Exactly so -- one could read that picture many ways!

Thanks, Nana Jo and Pamela!-- First I have to write it!

That's one of the rules of writing fiction, Jon Lee -- to make the reader keep turning pages!

Can't wait for the next installment. And the word, 'bumfuzzled' is just great. I know I'm going to use it...often!

I love the tale so far! What an interesting take on Sepia Saturday. Good photo, too!

Oooh - can't wait to read the rest. Are you sure there's not a novel's worth?

A great word, 'bumfuzzled'! I never heard till we moved to the mountains, Martin. I look forward to hearing that it has become popular in England. Of course, it may have originated there. Hmm, time to ask Mr. Google.

A tempting idea, Meri! I'll have to think about it...

What a great thing to do with Sepia Saturday. To do it at all is inventive, to do it so well and with such style is marvelous. Like everyone else, I'm hooked.

Vicki, I was able to catch up on you this morning and was thrilled to see Grandaddy and I love what you've written. I had forgotten that I had told you the name of his dog. I can't wait to read the rest of the story!!!

I really like this story. I can’t wait to read more.

Why didn't you finish it right then so I could continue reading : ) I'm already into it-so I can't wait to see what happens next.

So the mystery begins again! I am so delighted that you are at it again. I can't wait please please finish it. I discovered your book Old Wounds on a trip thru Hot Springs at the hiking shop. Well to say I a Kentucky girl was hooked.....well yeah,Hook line and sinker. Many of my ancestors were from NC so my Western Ky roots are very used to the bumfuzzeled & the dialect. Funny how dialect carries over. Those ancestors got to Ky in about 1830's and my grandmother spoke much the same way 140 years later. I so love your books they remind me of that same grandmother. It is like hearing her talk again! My husband & I got the chance to go to Wildacres 2 years ago attending a jewelry making class for a week! What a wonderful experience one that I hope to have again. Between Wildacres & your books I discovered mountain magic (my husband already had that bug walking the AT)! Please never stop writting you have become my favorite author. Sorry Larry McMurtry! I just finished The Day of Small Things yes at 3:00am. It was just a lovely book.