The Gordons - A Magpie Tale

The following is  written as a response to the prompt picture posted by Willow over at Magpie Tales. 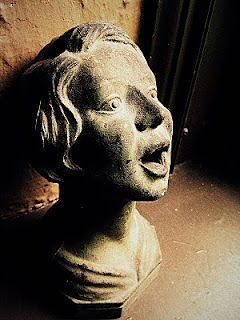 Debbe McIntosh rattled her car keys and glanced at her watch. Typical, she thought.

Heaving  a martyred sigh, she turned toward the empty staircase and called, pitching her voice to carry.

"Samantha! We're  going to be late for your gymnastics class if you don't get down here this instant. Do you hear me-"
"Relax, honey," Biff McIntosh, flushed and sweaty from his morning run, poked his head in the front door and gave her that disarming boyish grin that worked so well.  No, used to work so well, she thought as he went on.
"Sam ran next door to take some cookies to the new neighbors -- something about a good deed she was doing for Girl Scouts. She said to tell you she'd already put her gym bag in the car and she'd be right back."
Debbe pursed her lips. "Do we know anything about these people? Anything at all? They could be axe murderers or-"
"Give me a break, Deb -- this is Hazelton, for cripes sakes! You know how strict the covenants are -- absolutely no axe murderers.  Besides, I told Sam not to go in. And I'm right here, keeping an eye on her. What could happen?"
Biff paused his post-run stretches and glanced to one side. "She's standing there on the door step -- must be talking to one of the sisters."
"Sisters?" Debbe grabbed up her purse and stepped through the door to peer across the narrow strip of perfect green that lay between the two houses.  Shading her eyes from the sun, she saw her daughter staring up at someone just inside the other house.
"Who told you there were sisters?" she asked.
Biff  dropped down in the top step and began to remove his running shoes as he talked.  "I ran into Chuck Hendricks yesterday. You know, he's the realtor who sold that house. Kinda interesting -- our new neighbors are two sisters who last lived in Greece. Chuck said they liked the climate here and they chose Hazelton because they liked the privacy fences, of all things.  He hadn't actually met them -- their banker handled the sale completely -- but he spoke to them on the phone and their English was quite good,"
Debbe squinted against the sun's glare. "It must be. Look how Sam's just standing there listening. She seemed utterly spellbound."

"Why did these sisters leave Greece, I wonder?" she mused, really to herself but Biff was eager to share the gossip.
"It's a sad story, according to Chuck." Now Biff was stretching his arms and rolling his shoulders. It always annoyed her that he went through this little routine on the front steps rather than in the back yard. Rippling his muscles and showing off his tan for all the neighbors.

But she wouldn't give him the satisfaction of knowing how much it pissed her off so she just said, "Sad?"
"Yeah," he had lowered his voice now and they were both watching their daughter. "It seems there was a third sister who was murdered --decapitated.  And the guy got away with it. Greek politics, Chuck said."
The child was still frozen in place, rapt in whatever tale this Greek woman was spinning.

Debbe looked at her watch and moved to the car. She reached through the open window to tap the horn and recall Samantha.

"Did Chuck say what our neighbors name is? Something unpronounceable ending in -opoulous, I bet."
Biff paused in the doorway. "The first names are pretty weird -- he had to write them down for me.  Get this: Stheno and Euryale -- sounds like a cleaning product and a European ale, he said. Old Chuck's got this system for remembering names -- has to in his line of work."
Stheno . . . Euryale . . .
Back in college Debbe had had a system too. That Humanities course in Mythology -- impossible names you had to know if you wanted to pass. And she was sure she'd learned these. Stheno and Euryale were . . .  who? There were three names. Stheno and Euryale and . . .

Medusa - that was the third sister -- the mortal one of the trio who Perseus had decapitated.  Decapitated . . . All three sisters -- snake-haired gorgons whose glance turned people to stone. Mythical monsters. Mythical . . .
"Biff?" She had to ask. "What's their last name, these sisters?"
"I think it was Gordon -- not Greek at all. I figure their dad must have been English -- that would account for how well they speak the language."
Debbbe took a halting step toward the low hedge between the two properties, trying to fight back a nameless rising surmise.

"Sam!" The word was little more than a hoarse croak.

The child stood open-mouthed, looking up.  Debbe saw the heavy front door slam shut and heard the crack of wood on wood but still her daughter didn't move.


If you'd like to know more about the Gordons Gorgons, go to http://www.theoi.com/Pontios/Gorgones.html

Wow! Vicki, that was so well written. Thank you for a very enjoyable tale, even if it did make the hair on the back of my neck stand up!

Now I wonder, though, how would the mother report this to the police? They'd never believe the stone statue used to be her living, breathing daughter. I wonder if the mother will wind up insane? The father turn into an alcoholic? How would they possibly get revenge against the Gorgons, get any kind of justice
for their daughter? How would they stop the Gorgons from doing this to others?

O my, Victoria! Thank goodness I don't have to figure out the rest of this particular story!

I loved the story, very well written and creeping!

Wow. This was amazing. Creepy and at the same time a wonderful read. Its nice how you leave us to figure the ending. Nobody would ever believe her.

oh that was a wicked take ont he theme...i was going to do a medusa tale..glad i did not now as it would have paled in comparison...

LOve this; those snake-haired gorgons (Gordons), whose glance can turn people to stone...

Oooooh, that deserved a good cup of Lady Grey to go with it! Back soon, with my cup, to savour the story!

And I wonder what they're going to do with the stone statue on their front stoop....

Deliciously creepy! This was one fantastic read, Vicki!

And so the nightmares of the ancient mariners reached modern suburbia, what ingenious tale! :-)

Vicki, that story was just long enough to last a tea-cup long! Perfect getaway from duties, thank you!

Great story, and super creepy. This is my kind of read.

Love it that your story has provided all of us Magpies the history behind Willow's stone girl.

Most excellent take on the prompt.

Awesome! Your writing is wonderful. Loved all the little bits you used to create a complete picture. So well done. Really enjoyed your tale!

I've always loved the story of the Gorgons and could think of nothing else when I saw the prompt.

Glad it was right for the cup of tea, Merisi -- I was embarrassed about such a long post (particularly after my lengthy Sepia Saturday post) - it's not easy for me to be concise in fiction.

Jean, it creeped them out which is why it ended up where Willow found it.

Thanks for the comments, folks! -- I'm coming visiting.

Very nice! I was laughing all the way through with Biff and "Greek politics." Ha!

Vivki,
""Why did these sisters leave Greece, I wonder?" she mused,"
Splendid interpretation of the prompt and great story telling---as usual!
rel

I liked your story so much, I read it twice. Very well written and engaging. I like a bit of 'creep'.
Blessings, Star

Oh Vicki, I LOVED this! It was so good that I am going to read it again! You know, your an awesome writer.
It was nice to see your link on Magpie Tales!

Gordon, indeed..I got so wrapped up in this yarn..why am I laughing and shivering at the same time? Because you're so good, that's why!!

Vicki -- what a story! You write so well. Like the change of photo header -- so beautiful. -- barbara

This is creepy. I loved it. A good little scary story.

That story was amazing Vicki!

Chilling. Truly enjoyably chilling. I still think the hub had something to do with it but... that must be my problem. :) A great tale.

Dear Vicki: Love how you intertwined the classic with the contemporary. The moral of the story; MYOB or by you're curious folly (didnt curiousity kill the cat?) turn to a cold stone lawn ornament by one of the Gordon aka Gorgon sisters. (how to make "d" and "g" like "ae"; "dg" od "gd"?). Excellent suspense-filled buildup. Love your use of the colloquial; very realistic not stereo-typical which makes the character's (GREAT characters) speech so awesomely freaky-zoidish! Excellent!

Thanks, folks -- I think creepy things are always creepier when in a setting of extreme normalcy -- and what could be more normal than Biff and Debbe?

That is exactly where creepy things happen. Next door where no one expects. Right across to the next street where I live, a man killed his wife and then himself with 3 little kids left watching and then alone. Didn't even know about it until I went to work that day. Truth is stronger than fiction, as you well know. Great writing.
QMM

learning about names is not my cup of tea...spooky and fun tale...
I wonder what happened to Sam...

I thought about Medusa, too, but forgot about her sisters. There goes the neighborhood!

Oh, what a story you have woven Vicki. Thoroughly spell binding.

That was a fantastic story, the way you got it all in , so much happening over a few minutes...the rising tensions, the mythology, really finely crafted -
and a great read!

It gave me chills : ) and thats a good thing!