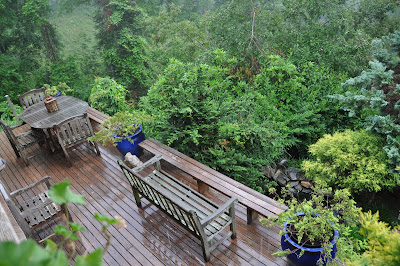 The area just below our deck -- surrounding the little goldfish pool -- was meant to be a sort of Appalachian version of a Japanese garden. There are azaleas -- all white for a serene feeling, a red lthread-leaved Japanese maple, forsythia, Japanese boxwoods, a yew, a crabapple and any number of dwarf evergreens in a dazzling array of green, yellow, and silver foliage types.

At least, when I bought and planted those evergreens twenty some years ago, they were labeled 'dwarf.' But they've grown and grown and grown till they are shading out the azaleas, blocking our view, and pretty much hiding the fish pool but for a tiny peek.

The rhododendrons and yew were trying to hide the Japanese maple and a particularly aggressive Virginia Creeper was covering up the Dwarf Alberta Spruce. 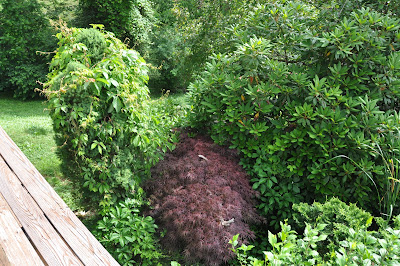 What's more, one of the tallest evergreens was bowed and broken by last December's heaavy snow. 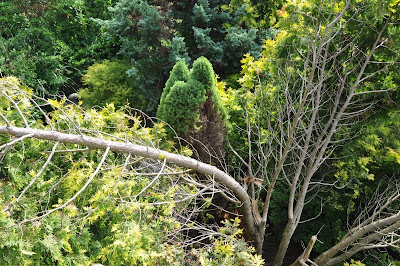 I crawled about in this jungle, wielding long-handled loppers and pruning shears, while John and his chain saw dealt with the really big stuff.  And John and the Kubota hauled away the trimmings to a brush pile down in one of our fields.

Now the Dwarf Alberta and the Japanese Maple can breathe! The rhododendrons look awful and we'll have no blooms to speak of next year but I suspect they'll be back by the following year. 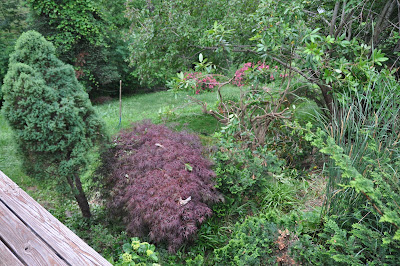 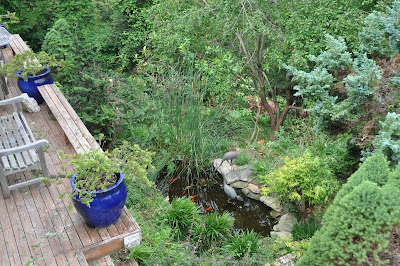 And most of the bent- over gold evergreen has been removed.  The branches that remain will probably go vertical and become leaders and in another ten or twenty years they will probably have to come down.
It's a start -- there is a lot more to remove so that the azaleas can bee seen. And there are many, many more areas of our yard that need Tough Love. And the yard of our rental house is due for refurbishing.
But just for now, I think I'll collapse with a cider.  And some ibuprohen. I'm exhausted but aglow with virtue! 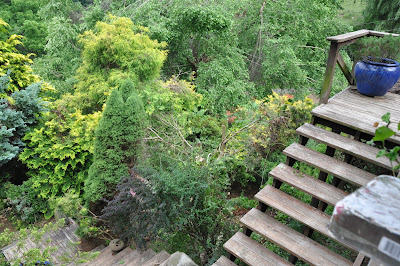 Email ThisBlogThis!Share to TwitterShare to FacebookShare to Pinterest
Labels: gardening

You did a good job, Vicky. The place looks now very inviting, peaceful and ideal for thinking.

A great job!
The result is wonderful:your garden would deserve a visit!
Thanks for sharing.

Wow, you sure made quite an improvement ... what a wonderful place to sit and relax!

Pruning things is so satisfying, isn't it? Hard work, but very much worth it. I hope your fish don't get sunburned now!

Which one is the purple-pinkish looking tree? Yes, I am botanically challenged but I want to learn the names of the plants around my house as well as others I see. Thanks.

There's still much to do but it's a start!

Helen T in SC, that purple-pinkish tree is the threadleaf Japanese maple. It's a beautiful small low-spreading tree -- this one got severely pruned by Mother Nature a few years ago but has bounced back quite well,

I love your Appalachian Japanese garden. You guys definitely put in a day's work. And it shows. Just beautiful.

Nice job! Isn't it crazy how things can go 'jungle' on us? It feels awful to chop and prune but the end result is always amazing.
Tammy

Vicki, Amazing Appalachian/Japanese garden that you and your husband have developed. I am sure you have had to take Ibuprofen many a day/week! -- barbara

It certainly looks like a big job Vicki. When we plant things, we do not realise how big they will grow. I have had the same experiences but not with the added problem of being on a mountainside.
Enjoy your cider!

Vicki, there is nothing more rewarding than yard work but it also lets you know how old you are as it rewards you with exhaustion!
Your yard looks heavenly to me!! :)

Ah, Vicki. I am there, doing that. Feel your aches and pain.

If the tag on the shrub or tree that is bought at the nursery reads, “dwarf,” I don’t think the folks at the nursery are lying to us. They just do not understand the force with which the customer will later be confronted.

It may be the meek that ultimately inherits the earth, but in the meantime, Mother Nature wastes no time in reclaiming every square foot of what was once her domain. I can imagine her chuckling and saying, “Thank you,” every time she sees an unsuspecting human planting another “dwarf” shrub or tree.

Thanks, folks -- yes, I'm in ibuprofen mode these days as I hack away at our private jungle.

Carol -- you're back! I'd been wondering where you were. I sent you a pic of the Jacob's Coat rose where is doing very well!

Yes, Bo, I think that what the nursery calls dwarf just means that the shrub will be 20 feet tall instead of 70.

Brian - Actually -- it's our front yard -- our house backs up to the mountain so there's no much of a back yard at all!

Send some tough love over to the manor. Our Virginia Creeper is taking over! Pretty shot of your deck.

Wow, what a difference. It looks gorgeous!

The deck is so beautiful.
Wished I could stop by for a mint julep. ;-)