The Freedom Rangers Have Arrived! (Probably Not What You Think) 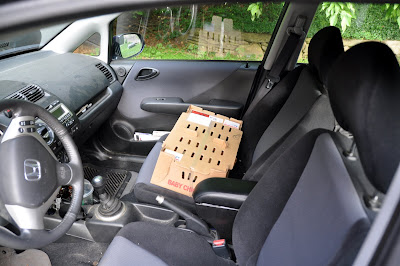 The post office called Friday morning just before seven to say that our chicks were there. John swallowed down his coffee and went to retrieve them.

They'd hatched Wednesday and been packed and shipped right away. Baby chicks don't have to eat or drink right away and they are packed in boxes small enough to ensure that they stay warm during their travels but the sooner they can be gotten out of that shipping box, the better. 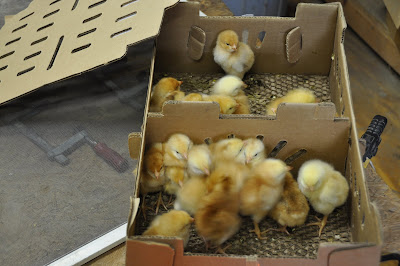 This is something new for us. We've always had laying hens but, aside from one unpleasant incident involving eleven over-age cockerels, a hot August day, and far too many yellow jacket wasps, we've not butchered any of our chickens.


That's about to change. In an attempt to be better custodians of our  food, we are giving this a try.  These are our future chicken dinners.


The biddies are a special breed from France. Over there they qualify for the appellation Label  Rouge; over here, they're marketed as  Freedom Rangers.

(I sincerely hope this is not an Francophobe maneuver like that stupid Freedom Fries thing, back when France declined to follow us into the shaky ground of Iraq.) 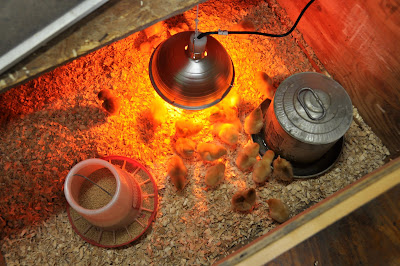 The biddies have been decanted into a brooder box in John's workshop until they've grown a bit and added some feathers. Then they'll be shifted to their pasture home below.  It will have a tarp over on end and probably some roosts and it will open into a daytime yard surrounded with electric poultry netting. The chicks will get commercial feed but they'll have the advantage of weeds and grass and bugs and worms as their home is shifted about the pasture.

And in ten weeks . . . they'll meet their end. But we hope it will have been ten very good weeks. It will certainly have been better than the life commercial broiler chickens lead.. 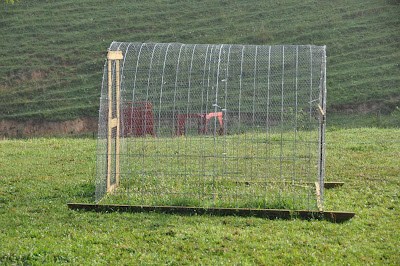 Elora's got chicks too, and turkey poults as well, over at her place Just Off the One Lane Road

Aww. Little sweeties. I think it would be hard for me to make them into dinners after raising them. Just don't give them names.

I am with Willow on this -- but then again I eat very small amounts of meat or fish and on rare occasions. I was watching a syndicated show where this man goes around the world and eats strange cuisine and they showed the people preparing food outside for him and the kids and animals were roaming happily about and there was this adorable young pig acted like the family dog enjoying the festivities -- the host of the show announced at that moment that the next scene was cut from filming because they grabbed this happy little piglet and well he was next on the hot coals being roasted. That just about did me in seeing this happy soul playing and then had his throat slit.
Like Willow said just don't give them names. They sure are adorable.

Have a lovely week end,
Joanny

We did this many years ago and it's well worth the effort. You're smart in doing your timing right, as butchering isn't fun under some conditions.

cute ittle ones. good for you on creating your own food in a new way. i did chuckle a bit at willows comment as it could lead to some interesting dish names...but no i would not name them either...

People use to do this all the time!! It will be interesting following their progress!!

Hey, Vicki! Glad Vicki's Chickies have arrived safely! I am so interested in how you like the French Freedom Rangers. We might go with the breed ourselves, next year. I'll look forward to learning how they do on grass-based feeds. We simply made our own leap to that platform (grass)with the traditional broilers. And, fortunately, they did well. We, too, wanted to provide a good quality of life for them even though they were destined for the freezer. But having read the description of your FR's heritage I am really impressed with the overall concept. I applaud your choice. You know, the more I learn about France, the more I see what respect and concern they have for the agrarian and pastoral life.

Our biddies are doing well. No more losses. Everything's stable. The turkeys are totally engaging. Much more curious and "attached" than chickens are. I am beginning to feel like Willow! Already. When I go up to the chick mobile to check on them, all the turkeys come to greet me! :-((

Temperature's in the low 90's today, so we've provided lots of shade via sheets! It's better than trying to keep them warm (as would have been the case if we'd purchased in, say, April or May). Good time of year to get chicks.

They look so cute now and they will be so tasty ;)

We used to raise rabbits and made the mistake of naming them. I had to lie to my children about what we were eating.

We named our ewes too when we were raising sheep, but learned our lesson and never named the rams (on purpose). Sometimes their appearance just begged a name - like the one with a big spot on his forehead. Bet you can guess what we called him (hint... Big Spot). lol

Enjoy those chickies - both now and later! I look forward to seeing them grow.

Willow - we know not to do that. When we raised two pigs every year we always named them Oscar and Mayer -- to remind us of their destiny. And we were careful not to treat them like pets.

Joanny -- I agree that would be sad but that piglet probably had a far better life, short though it was, than the pigs raised at the factory farms that provide the pork for our grocery stores and restaurants.

We were vegetarians for a year - but we ate dairy and eggs. And then I realized that unless one is prepared to be a strict vegan -- no eggs, no dairy product, no leather -- one must come to terms with the fact that animals die to provide food for us. Eggs? You can eat non-fertilized eggs but to end up with a flock of laying hens, a lot of male chicks are discarded. Milk? A cow pretty much has to have a calf once a year to continue to provide milk. And half of those calves will be male -- and end up as steers in a feedlot somewhere. Or veal calves.

We are taking baby steps toward better, healthy food, raised humanely. We're lucky to be where we are -- of course not everyone could do this. Nor want to. We'll see how it goes for us.

And the sooner they can be got out of the Post Office the better too! ;-) I think box of chicks tend to drive the postal workers even battier--and we don't want that! ha. Good luck in your endeavor. Personally, I wouldn't even try, because I know what would happen. Once feets hit the ground here they end up being 'pets'. However we all know that their short lives will be much more peaceful and productive then the sad factory farmed chicks. I haven't enjoyed poultry for awhile now, and when I rescued Angry Noel (the big white commercial turkey) from when he fell off the big transport trucks, it seemed to just pretty much clinch the deal. (Noel didn't live very long, but he was fiesty).
Tammy

Hm, I know what it's all about, I am a meat eater and I like my chicken dinner to be free range; still, I don't suppose I could wring a chicken's neck.

I just read your post on plastic bags. I've long stopped using them.
But what really excites me is the idea of a bag boy!
Over here you pack your own bag, unless you are a decrepit old person, who is practically on her knees.

You know. Tammy, some big turkeys and some 'broiler breeds' like Cornish Rock are bred to grow so fast that they get too heavy to live a long life. These Freedom Rangers aren't quite as freaky but they are definitely bred to be mature at ten weeks.

Bag boys are a mixed blessing, Friko. (And they're not all boys; some are mature gentlemen.) They'll fill your bags (with varying degrees of care) and schlep them to your car if your want. I generally prefer to do my own bagging -- all the frozen stuff HERE; all the produce THERE, non- perishables all together. And, except when I was recovering from back surgery, I schlepp my own bags.

oooo I love keeping chickens. Ten weeks doesn't seem too long though. Are you sure you'll be able to despatch them when the time comes? The chicks are gorgeous. Good luck with it.

Well, as a matter of fact, Star, doing them in is going to be John's job. I'll help with the dealing with the carcasses. I have wrung chicken's necks -- if I'm going to eat meat, I feel I should be ready to do the butchering. As long as it's quick -- and it will be -- I don't feel bad. (I hope for the same thing myself -- quick.)

Well, as a matter of fact, Star, doing them in is going to be John's job. I'll help with the dealing with the carcasses. I have wrung chicken's necks -- if I'm going to eat meat, I feel I should be ready to do the butchering. As long as it's quick -- and it will be -- I don't feel bad. (I hope for the same thing myself -- quick.)

Neat! I can't wait to see how it works out for you guys. Something I've been thinking about doing too.

Such cute little fuzzy balls! Good thing they aren't that cute when it comes time to eat them.

I'll do periodic updates -- no, they aren't as cute when they mature, thank goodness!

I myself purchased 5 little chicks to raise for egg's, not going to butcher these girls, but with the way things are looking, it may just turn into a meat and egg market of our own ;)

Ours are bigger now and flying, clipping of the wing is upon us!!