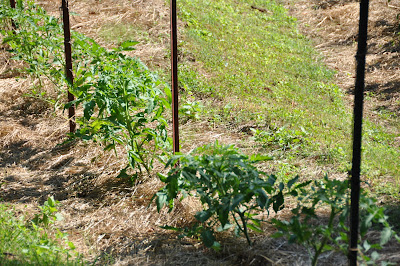 The tomatoes above look nice and full and healthy.  Too full, however.

I spent some time in the garden, removing the lower leaves and the suckers from the tomatoes.  They look rather sad and spindly now but they'll be benefitted by increased air around them and perhaps they won't get the dreaded blight for a while.

As I worked, I could hear the bray of the vuvuzelas from the house where the World Cup was on.

and I felt a closeness to the rest of the world as I oonched along on my rear end down the rows of tomatoes. 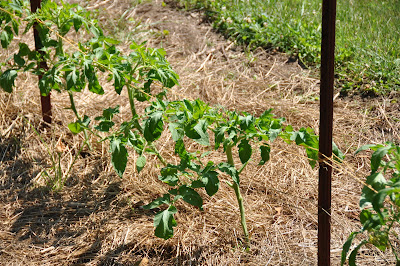 And on the subject of pruning for better air circulation, I've been trimming great fur wads off of Eddie's hindquarters. It's a slow and inexact process as I have to catch him unawares and I can get in one snip before he brings his claws into action.  But over the past week, I've made a bit of progress . . . 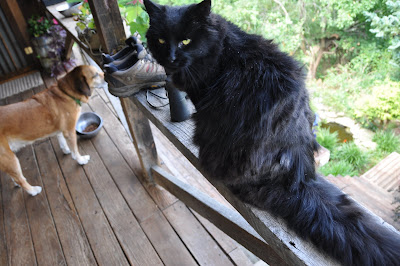 It will grow back, Eddie -- I promise. 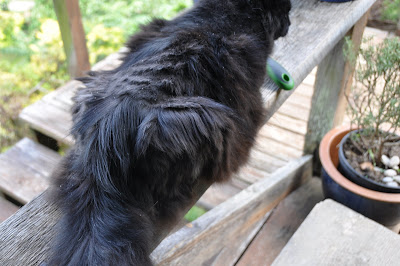 Great pictures of the garden, and I love the term, 'oonched'.

I hope Eddie has a forgiving nature! Better wear your gardening gloves when you take the clippers to him next time.....just to be safe.

yeah i like that word as well. i am sure he wil forgive you...my cat is pretty forgiving...wonderful garden...ours slowed a bit this week but hopefully will be pickin soon.

'conched' along on your bottom? how does that work?

I never thought you'd turn out to be the sort of person who 'shaves' her pets. Poor Eddie, the indignity of it!

I hate the sound of vuvuzelas, it's nightmarish.

Your tomatoes look great..Eddie not so much. ;-) I'm sure Eddie won't forgive you, but these little chores must be done. Sage is the only one of the cats that hates to have his nails trimmed. Well he hates about everything, but this esp. He will growl and yodel, and it is a bit unnerving, but so far no attacks--but I work fast! What varieties of tomatoes do you have?
Tammy

Oonching is a forward motion in a sitting position -- useful for one whose knees are too shot to kneel to weed -- even with knee protectors.

You wound me to the core, Friko! I never shaved Eddie (As if! That would require heavy sedation.) I just cut away great lumps of dread- locked fur (at great personal risk, I might add.)

If I brushed him daily, these lumps wouldn't happen, I hear someone saying. Well, Eddie doesn't take kindly to brushing either . . .

As for trimming his toenails, I can only imagine the scene that would ensue if I tried such a mad thing, Tammy.

We have lots of Roma tomatoes and some Cherokee Purples, Brandywines, and little yellow pear tomatoes of some kind.

Memo to World Cup watchers: "Deja vuvuzela" may be Afrikaans for "memory of maddening horns." At one with the rest of the world is wonderful, but the horns are a bit much.

I've been oonching for years and didn't know it!

Nice video of your flowers.

Re vuvuzelas -- I did mention I was down in the garden, hearing them from afar. I can't imagine what it would be like in the stands.

Poor Eddie, but more, poor YOU! I have my share of scars from trimming fur mats off of Shadow and Opie Furgus. You'd think they'd be glad to be rid of those things, but apparently they don't feel that way. And Oscar is SO ferocious I have to take him to the vet to be shaved.

There's nothing like a rich home grown tomato! Your book cover looks fabulous. Love the change from blond to brunette!

I forgot to say, Oscar behaves very well at the vet, so no sedation is required. But even if it were, I would take him to be shaved as leaving the mats can cause terrible sores underneath them, which can become horribly infected.

Your garden is looking great! With this heat we've been having Eddie must appreciate your efforts on some level : )

I enjoyed immensely reading your latest posts (I am mostly off line, but: Only 5 more days and then summer break!).

Your sage bed makes me sage green with envy. I love sage and freeze it whenever I get ahold of a fragrant bunch at the farmers' market.

Sorry to delete that last comment, but apparently either my brain or my fingers are unable to spell at 2am.

What I tried to write was about the dirty look Eddie is giving you. Being so dark makes that glare particularly menacing!

And love the garden photos--especially that color of daylily. Very pretty!