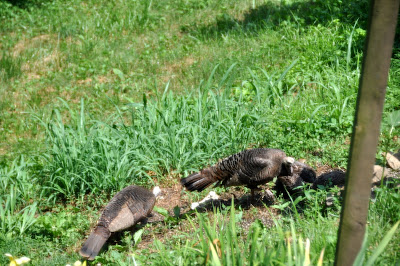 Yesterday afternoon I looked out the bedroom window and saw two turkey hens scratching around beneath the bird feeder. It had been quite a while since they'd visited and I was happy to see they were still around. 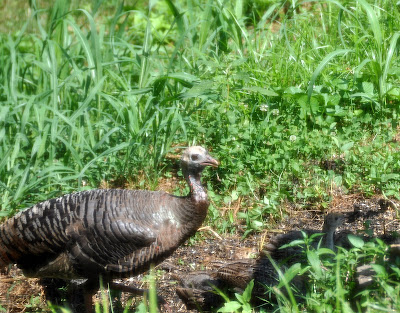 A closer look showed what they'd been up to -- each had  a bunch of poults with her. 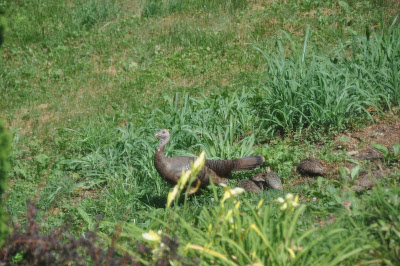 One  led her brood off as soon as she saw me at the window,  the babies scurrying after her through the tall grass.

The other hen continued to excavate for birdseed, stopping now and again to keep an eye on me. I counted at least 14 poults in all and there may well have been more. 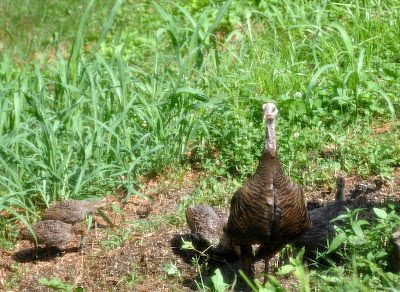 A little later, I looked out to see if the turkeys were still there.  No, they weren't . . . 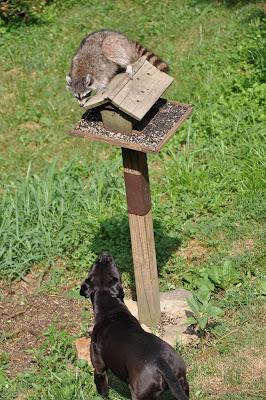 But Ali Ali and a reckless young raccoon were. 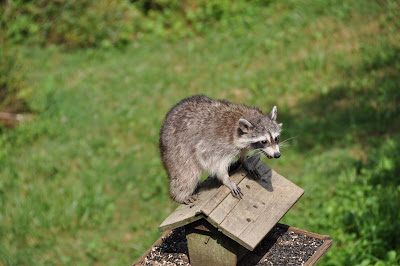 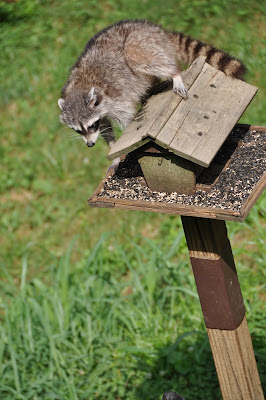 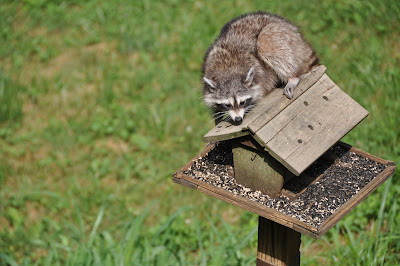 Luckily, Ali Ali allowed himself to be called away and put inside . . . 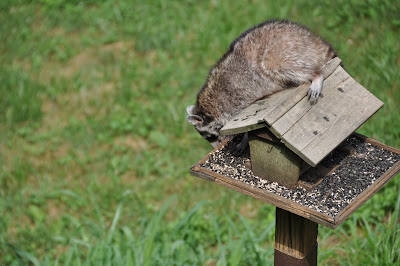 And the reckless young raccoon scuttled for the safety of the nearest tall tree. 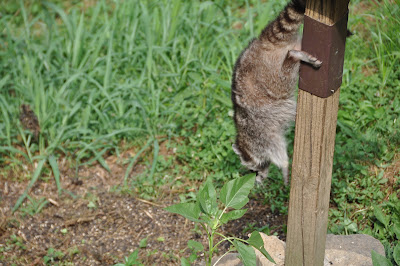 Email ThisBlogThis!Share to TwitterShare to FacebookShare to Pinterest
Labels: wildlife

Seems there is always something to see while looking outside ... wildlife abounds.

I'm amazed in this record setting heat that we've been having that deer are showing up mid-day to eat in the newly cut hay field, and our resident fox can been seen roaming around also, but so far the raccoon wait till dusk/night time to raid feeders.

Great sequence of photos, Vicki! I'm always torn between seeing and enjoying the wildlife and having to patrol for its presence because of more human concerns! For example, lots of rabbits=no peas this year! But the turkeys are always a welcome sight. For them? I'd sacrifice peas any day!!

And...I meant to comment on your tobacco post the other day. I read every word and enjoyed the photos immensely!

Great photos! and what about a short movie ?

I love it! I'm so glad you broke up the Ali Ali/raccoon interaction before somebody got mad.
Keep watching; you might see a black bear out there!

I enjoyed the photos. I didn't know what a baby turkey was called. There always seems to be something happening in our yard, but it's birds, squirrels and rabbits.

These were great shots. They all look turkey babies look very cute. The Raccoon's pictures were nice too.

You have got a lot of wildlife. I only have occasionally ducks and other birds, toads and sometimes a hedgehog.
My daughter in Australia has also wild turkeys, but also ordinary turkeys. One of them had three chicks but one of them was taken by a snake or a goanna.

I was surprised to see a wild turkey looking in my kitchen window the first Thanksgiving week we lived at WM. Haven't seen one since. Looks like you've got a whole family of them!

Loved the turkeys. How lucky you were to get such good photographs of them.

Wonder what the raccoon was doing out in the heat of the day? I always worry when I see them out but he certainly looks healthy enough. Perhaps he's just a reckless teenager. Glad Ali Ali didn't tangle with him.

I, too, was concerned about the raccoon and the posszibility that he had rabies. But he looked healthy and, as soon as Ali Ali was removed, he made a smart decision. I really think he was just a reckless teenager.

Miss Yves-- I did try to do a live video of the turkeys but must have forgotten which button to push to save it.

The turkey pictures were shot through the window screen which lowers the quality.

Wil has hedgehogs! Such cute things! Are they considered pests, Wil?

how kind of you!

I'e just read Barbara Kingsolver's 'Prodigal Summer" where I met wild turkeys for the first time! One of them gets eaten in the story.
Is she writing about your landscape?

Your garden does look like a good feeding station for the wildlife around you. Your pictures of the turkey family are precious.

Friko -- I don't remember exactly where PRODIGAL SUMMER is set but the landscape is very similar to where I live.

Vagabonde - the raccoon was back the next day as was the turkey family.

Makes me wonder what you'll see next at the hangout : )