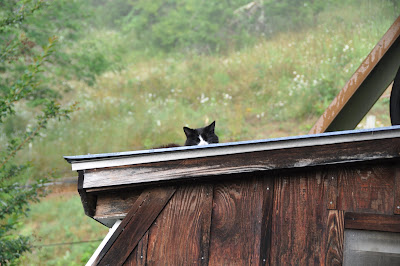 So, there were seven of us for dinner last night, plus a three year old and a lap baby. And our four dogs plus three more.
(Miss Susie Hutchins decided to observe from afar.)
It was very, very hot.
And then the oven quit working.
No worries -- move the sweet potato oven fries to the grill-- the chicken's in the new smoker. Forget the cobbler or tarte you were going to make -- ice cream and blueberries will be just fine.
The shower drain is clogged and one of the visiting dogs has just rolled in cow poop.
No worries -- point the guest to the other shower and get out the Liquid Plumber. Give the dog owner some soap and a towel and point him to the outside hose.
The smoker seems to be taking longer than it should to get those three chickens done.
No worries -- open another bottle of wine and pass the tortilla chips.
The chickens are done at last -- several hours later than the original estimate but it is so delicious that we forgive the slow smoker and open another bottle of wine to go with the meal.
Time for coffee and the abbreviated dessert. An unexplained light on the is blinking red and the coffee is not happening.
No worries! It's time to go to bed anyway.
(In spite of one thing after another going wrong, it was a delicious meal and, I believe, a good time was had by all.)
No worries!
No worries, at all!

Email ThisBlogThis!Share to TwitterShare to FacebookShare to Pinterest
Labels: family

Oh my gosh, Vicki, it sounds like the gremlins were busy at your house yesterday. Your sangfroid is admirable!

And I bet a good time really was had by all...except, maybe, for the person who had to wash the cow poop off their dog...euwwww!

Why do these things seem to happen in clusters, I wonder? Still, never mind, good company and a positive attitude will see you through every time!

It's good to remember that people come to see you for the company and not the food! But it sounds like you managed to feed them all very creatively anyway, despite the mishaps.

I got a chuckle over the chain of events that made up your evening, but the bottom line is everyone had a good time. Who can't relate to something like that having happened to them at one time!

hakuna matata!
happens to the best of us...and it can ruin the night...or make it that much better....

A great attitude and a wee bit of wine always makes the situation seem worry free! I love a full house and friends around. Oh, and how about those storms in NC piedmont and mountains to add to your weekend!?

The memories you made are priceless. You will look back on this visit with the fondest of smiles. It sounds like a wonderful time to me!

I do so love your attitude. Makes for a much better world.

Too funny...as they say, when it rains it pours. Luckily you all seem to have taken it well. Now, *I* would have gotten a little worried when there was no COFFEE! ;-)
Tammy

You're very clever, I admire your positive attitude, congratulations!

A dozing cat on a hot tin roof! What would Tennessee William have made of that? ;-)

I am glad you had a good time over the weekend!
Incredible how the appliances sense just the right moment to brake down. ;-)

A dozing cat on a hot tin roof! What would Tennessee William have made of that? ;-)

I am glad you had a good time over the weekend!
Incredible how the appliances sense just the right moment to brake down. ;-)