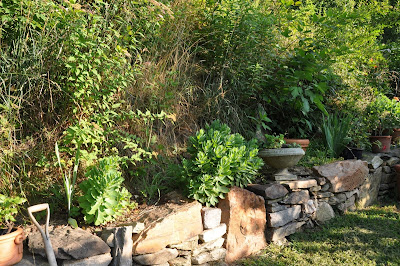 I've been enjoying this break from writing (no, still no word from my editor about UNDER THE SKIN) and it's been pleasant to wake in the morning with nothing on my mind beyond working in the garden, planting some more day lilies, and checking on the Japanese iris. 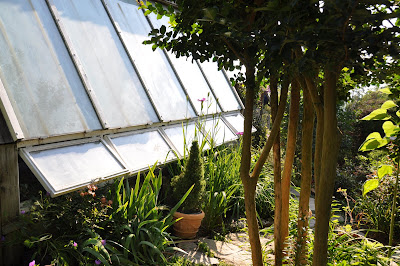 But then I received a few bound galleys of The Day of Small Things. These bound galleys replace the ARCs (advance reading copies) the publishers used to send out to reviewers. I assume it's a cost cutting measure; I think it's limited to mass market paperbacks such as mine. 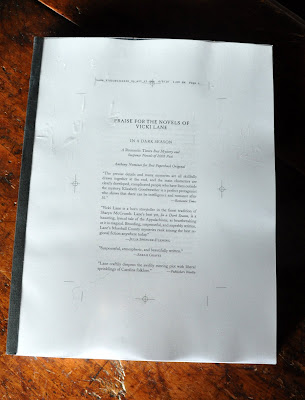 Frankly, I've been feeling like the red-headed stepchild ever since I heard there wouldn't be ARCs and haven't been thinking much about the book's release. But when I saw again the words that I'd struggled with for so long, a tiny surge of pride and optimism ran through me and suddenly I was back in gear. 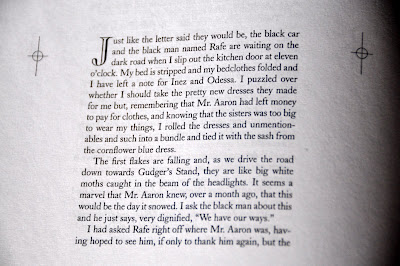 In a sudden burst of energy, I emailed the various booksellers who've hosted me in the past and began the process of setting up events for my book's release. And, taking a deep breath, I signed up for  Bouchercon, the big mystery convention which is in San Francisco this October, just a few weeks after The Day of Small Things hits the shelves. It was the attendees of this convention who nominated In a Dark Season for an Anthony last year so I can hope that this book will have a decent reception there.
I'm really proud of this book and want to do everything possible to ensure its success. The way a book sells in the first month or six weeks after its release is something publishers pay a lot of attention to --- so, I'll give it my best shot.
There'll still be time to watch the figs ripen. . . 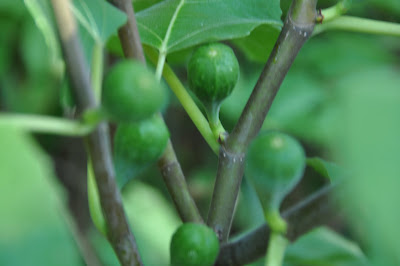 ... and to keep an eye on that gang of turkeys.

I could pick up on your excitement just reading your post! This is great!

Reading over the page you showed got me anxious ... I can't wait.

Enjoy the summer because it sounds like fall will be a busy time for you.

Finally getting this on a wait list! ;) I've seen a few ARCs in th' library( in th' past ), which turn up at th' book sales but the galleys would be cooler ;) Looks more like a script book, wot?

I have already pre-order the book on my Kindle! I love your craft so I'm thrilled that you're thrilled. I can't wait to find out where you'll be signing books. I so want to meet you! You remind me of someone very close to my heart. She isn't an author but she is a lover of her life on a hilltop in Ohio. She raised alpaca's in her retirement years. And to think I have only ever read your books and seen your blog posts. That says alot about your writing.

This is the first time that I hear about the end of ARCs!
You are very organized, the SF mystery convention will be a boon, I am sure. I wish you many summer days filled with activities you are looking forward to, like watching those turkeys! ;-)

That's wonderful, Vicki! It's great to feel the satisfaction with such a major accomplishment. Are you still reading mysteries, or did that project get finished?

Congrats Vicki. I could totally see your excitement reading this post.
Have a nice day...:)

O happy day! Calloo, callay!! Vicki's coming to B'con!!! I'l try not to squeal at you this time!

I so enjoy the pictures of your gardens and the mountains. It will be August before I get to the lovely mountains of NC. It's been horribly hot here which the tomatoes and peppers are enjoying, but the lettuce is bolting as fast as it can!

Hey, Pat -- did you get some rain last night? Yesterday was utterly stifling -- and when it rained around six I was ready to go out and lie down in it.

One small fig tree, Subby -- I think there are a dozen on it. It was killed back by cold last winter, even though it was in our greenhouse.

It may just be with my publishers, Merisi.

Jean, the mystery reading project
continues through next February. I've gone through 70 so far -- and there are many more waiting in boxes in our bedroom.

Thanks, Mr. S! (I have trouble with your name -- in my family calling someone s___d is about the worst thing you can do.)

Oh, Karen, please do squeal at me! And then let's have lunch or dinner together!
(now let's see if I can publish this comment only once)

That's more than a hint of excitement! You deserve to be very proud Vicki!! Figs? Ah, heaven.

Ms EM -- How did I miss your truly lovely comment before? A heat addled brain, no doubt! Many thanks for pre-ordering -- nothing lifts an author's spirits quite like knowing someone has put down cash for her book.

And how nice that I remind you of a friend! (I'd LIKE to raise alpacas.)

As I know dates of where I'll be signing, I'll add them to the ON THE ROAD section over in the sidebar. I look forward to meeting you in person!

You have to set up your own appearances for a book tour? I thought publishers did that. Is that another cost cutting measure or typical for paperback publishers? Would you want to come to Georgia if I could find you a location in or near Atlanta?

How exciting for you--and how busy! Remember to take vitamins!

Jump for joy -- another book for your fans!!!! Enjoy your Fall schedule! -- barbara

How exciting! And thank you for posting pieces of your writing life! I would truly enjoy as much as you want share on this front. I feel like a kid looking in the window of a candy shop as you open the occasional "page" for us to view. I hope you'll post your signing schedule/location.

Thanks so much, and...you go, girl!
Elora

You should be excited!! I can't wait to read it!!

Lynne in GA -- In the past, my publicist at Random House has done this. But she has moved on to another job and it wasn't till today that my new publicist contacted me. I had already had requests from a few of the usual venues so I went on and took matters into my own hands.

I'd love to come to GA. The thing is, not many booksellers want to do events for authors that don't already have a following. If a bookseller invited me to do a reading and I thought there was a possibility of a turnout of more than ten people, I'd be there. Maybe I'll do a blog post soon on 'book tours.'

Elora -- my signing schedule is in the sidebar under ON THE ROAD and I'll add to it as more events are scheduled.

How exciting! San Francisco is a long way away and it will be hard for you to leave your lovely home and all its comforts. However, I don't suppose it will be for long and you'll need a rest when you get back!
Blessings, Star

San Francisco in October is a very good month, the fog coming from the valley is no longer there. How exciting to have written a book like this and one that will be successful.
Again this year we have eaten two figs already which were as large as pears and have about 4 more coming up – the rest are small and green like those in your picture. I hope they get ripe before mid-august so I can make jam. It would be great for you to come to Atlanta and I hope I would not be on one of our already scheduled trips.

Star and Vagabonde -- I'm excited about going to San Francisco -- have never been there.

Figs as large as pears! I'm going have to give my tree a bit of a talking to -- and more fertilizer.

I can't wait to read this book! I wish publishing was a speedier process...

I've already pre-ordered 'The Day of Small Things' from Amazon, and every time I go through my e-mail I am cheered when I see their confirmation that it will be here 'round about September 28th.

I hope you'll love San Francisco, it's one of my favorite cities. It's about 650 miles to the north of me.

If you have time while you're there, do try to visit the Muir Woods National Monument, a section of old growth coastal Redwoods. They are truly awesome to see. It's eleven miles north of the Golden Gate Bridge on Hwy 101. You take that to the Hwy 1/Stinson Beach exit and follow the signs.

Rain – we have not had any rain since we came back from California on the 24th. My husband saw 2 deer walk through our yard yesterday – the first time this has happened – at least when we could observe them. I hope they won’t get run over so close to my road – at least the Christian Dominion School near us must be out for the summer and the kids who drive so fast are not coming by. I am thinking of some questions.