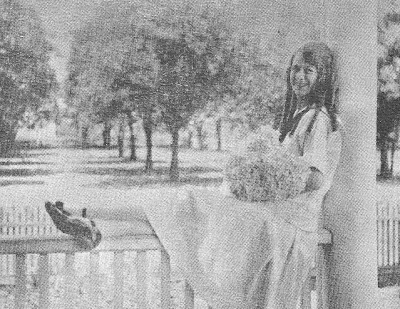 I knew her as Aunt Barbara Dupree -- an elegant octogenarian and sister to my husband's grandfather.

Before she was Aunt Barbara though, before she was Mrs. William Dupree,  she was a sausage-curled  Southern belle known to her friends as Bab Knight.


Is that an armful of hydrangeas she's holding?

Bab married William Dupree, a prominent Tampa attorney who, while recuperating from a serious automobile accident that kept him from his practice, began to develop a 25 acre tract outside Tampa into Dupree Gardens -- a horticultural wonderland, meant to draw the tourist trade.
There were extensive plantings, a lodge, and electric boats, gliding over a decorative lake. Long years later, one of Bab's contemporaries giggled like a girl as she told me how she and Bab liked to gather waterlilies and put them under the bedcovers in the lodge for unsuspecting persons to discover when they turned in for a good night's sleep. 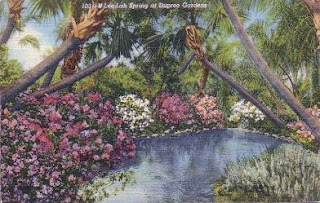 Dupree Gardens opened in 1941 -- just on the eve of America's entrance into WWII -- and after a brief success, closed in 1943, a victim of gas rationing.
Possibly because of the auto accident, the Duprees had a chauffeur.  Herbert Carrington, known in my husband's family as 'Cousin Herbert,' is something of a legend. It is whispered that, as well as driving, he had on more than one occasion helped Aunt Barbara to climb out the window when William (who in later years she always referred to as 'the old gentleman) had drunk too much.


In 1942 Herbert became a waiter at the Tampa Yacht Club, rising to the post of Maitre d' -- a position he held till retiring at the age of 105.


He died at 107 after a battle with prostate cancer. At the time of his death, he was dating a younger woman -- she was 85.

Cousin Herbert and Aunt Barbara -- I'm proud to be connected with both of these folks. 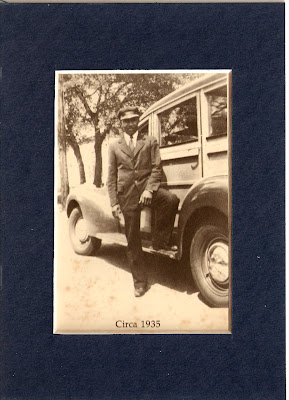 Such an interesting family you have. I lived in Tampa for two years, about forty years ago. I can easily see such a Southern family.

Sometimes the life of common people is not at all common. It deserves a good post. it is one of them.

You spin a good tale -- the ordinary days of folks becomes extra ordinary, --lovely young lady your Aunt Barbara Dupre
Herbert worked till he was 105? impressive to say the least.

Vicki, you have transported me to another place and time in a few well chosen words and wonderful pictures. It was fascinating to read about the Dupree Gardens.

How old was Barbara when she passed away? At 107, Herbert had 'stickability'.

not only did he work to such and advanced age but was dating a younger woman...props to him. what was his secret to longevity?

Aunt Barbara was in her late nineties at her death.

Herbert was just amazing -- click on the link to read more about him. I imagine that continuing to work had a lot to do with his longevity.

Sepia? What are you talking about ! This is as colourful a story as can be.
I love it.

I love the top photo and the accompanying story. Beautifully told.

The notion of finding waterlilies in my sheets tickles my fancy!

What a great family story. I can't help but think of "Driving Miss Daisy".
Hydrangeas are gorgeous, aren't they?
Have you visited Dupree Gardens?

The first photo is the very epitome of a southern belle and utterly beautiful, too! It's the kind of photo I'd love to hang up in my house simply because it's so gorgeous and interesting. Babs sounds like a wonderful character and I love the way you told her story. Sepia Saturday offerings sure enrich my life in many ways, and most especially ones like this.

I always look forward to Sepia Saturday and this one is terrific. I love hearing the stories about those who came before us.

Okay, Vicki. You've got the characters, the setting, and a long line of people ready to read the story.

Go lady. Do for Tampa what Pat Conroy did for Charleston in SOUTH OF BROAD.

Aunt Babs and uncle Herbert are both amazing stories and the pictures are priceless in the world of genealogy for a family. You can write a good tale for sure.
QMM

one last try to comment the other two went off into cyber never land....great tale again, but I was expecting part 2 of last week---you fooled me...

Water lillies between the sheets! Now that is pricelss!

I liked hearing about Babs-and I love the picture of her.

Poetikat, I thought of the Driving Miss Daisy thing too. It was a caring relationship in both cases.

I never saw Dupree Gardens -- they closed the year I was born (1943). In fact, it wasn't till the eighties I even heard about them.

I love that first picture, Nana Jo -- it was on an invitation to Aunt Barbara's 95th birthday party -- I need to try to track down the original.

Mn Pat -- I haven't written the end to last Saturday's post yet.

Beautiful Aunt Barbara. And Uncle Herbert, well I'm sure he had lots of stories to tell. I am so in awe of him working until the age of 105.

Ohh, it's wonderful that you have so many photographs and so much history for Bab and her family. I love the photo of her on the porch with the hydrangeas. I wonder if that was a portent of her future connection with plants.... I love the quilt on the right side of your blog. Do you know its history and do you own it? It's just beautiful!

Thank you, Nancy -- I made that quilt. It's based on a picture I saw of an antique quilt. Mine is made of raw silk and silk scraps and has embroidered flowers in the center of each square.

What an interesting blog. I like that Dupree last name. It sounds elegant. I had forgotten people shorten the Barbara name to Bab.