Esmeralda and the Brown Brachet-Ch. 1&2 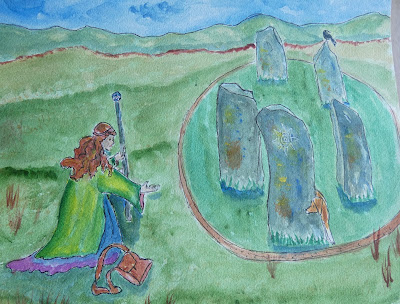 So, I'm repeating the first chapter because I went back and did a picture for it. The first Esmerlda pic I did belongs with the second chapter. Glad we got that straightened out. The story is becoming very silly indeed.

Clearly, the brachet had been a mistake. But when, on the third lonely day of her quest, the little hound had popped out from behind the Standing Stones of Glarn, Esmeralda had greeted it with joy.

“Hail, O brachet! Art sent to accompany me, mayhap as guide and guard?”

The skinny brachet had fixed her with a penetrating gaze which dropped at once to the leathern pouch at her side.

“Art hungered, little one?” Esmeralda knelt down before the brachet and reached into the pouch. “Gladly will I share of my simple provisions.”

Two wheaten rolls and a twist of dried venison disappeared, and the brachet moved closer to nose at the pouch. Esmeralda reached out a hand to stroke the dog—no, this was a bitch, to be sure. “What a pretty maid thou art, with thy white stockings and elegant long ears.

The brachet had accepted the caress with a philosophical sigh. There will be more food, she reasoned; in time that fragrant bulging pouch will be at my mercy. The woman is desperate for companionship. Look at her crouched there, cloak spread on the ground, face imploring. If she had a tail, ‘twould be a-wag.,

The brachet had allowed herself a tiny whine and, swallowing her pride with the last morsel of bread, had licked the young woman’s hand. There, done and done.

“Come out of it, you wretched brachet! Leave it, I say.”

“When the crystal is set alight by Selene’s beams, then must thou follow the path she shows,” the aged Sooth-Seer had whispered. “Follow it even as an arrow from a bow if thou wouldst find the dungeon where the true prince lies.”

Esmeralda drew in a deep breath and limped ahead. Just a few more paces and she would be clear of these dark trees. She could just glimpse a clearing ahead and sense, rather than see, a burgeoning glow.

The brachet continued her frenzied excavation at the base of a grandfather tree as Esmeralda stepped into the moonlit glade and held aloft her crystal-topped staff. 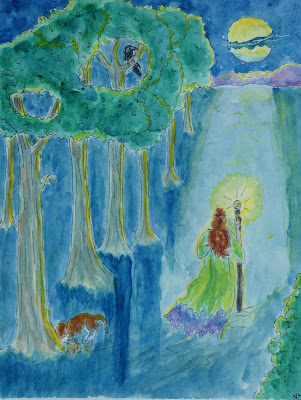 The full moon winked from behind the scudding clouds that fought to obscure it. Esmeralda stood waiting; staff raised to head height. Her arm began to tremble, and she wished she’d taken her mother’s advice and chosen a more slender support for the Enchanted Crystal.

“I can do this,” she whispered, grimacing as the racing clouds briefly obscured the moon. Then, raising her voice to be heard over the scrabbling of the brachet in the wood behind her, she began the Chant of Invocation.

O Queen of the Night,

Guide thou my steps.

Avert thou from my path

Thy creatures of the Darkness.

The piercing howl of the brachet interrupted the invocation, and Esmeralda whirled, her green cloak twisting about her most satisfactorily. She had endured countless fittings and had driven three sempstresses to tears with her insistence on a cloak that was not only warm and, it goes without saying, beautiful, but also had pockets and was properly swirly. What was the point, she had asked, irritably of the first attempt, of a cloak that didn’t flow about its wearer, wrapping her in mystery.

Adjusting the mysterious velvet folds, she called to the brachet. “Do shut up, you miserable cur! I’m invoking Selene here.”

Turning back to the moon, now almost completely covered with clouds, Esmeralda gabbled her way through the rest of the invocation, noting that the Enchanted Crystal was barely glowing now and that the moonlit path before her was rapidly becoming a mass of dark shadows. Just the place for Creatures of Darkness, she thought, and who can tell if that interrupted invocation had even worked.

The brachet had ceased her digging and, in the growing darkness, seemed to be looking meaningfully toward Esmeralda. With a sigh of resignation, Esmeralda reached into one of the cloak’s capacious pockets and withdrew the Torch of Night Seeing. Its slender metal cylinder was capped by a lens and with a click of the Button of Power, a strong beam of light shot toward the little hound. Esmeralda picked her way toward the brachet and the excavation she was guarding.

“What is it, you idiot bitch?

There, you stupid woman. An idiot bitch, am I? Here’s a portent for you.

Esmeralda played the light on the armlet. Rubies winked at her and when she leaned to pick up the beautiful thing, her fingers tingled as she touched it. She brought it closer to her face and turned it about. In the torchlight, she could discern words engraved on the interior. Strange words of no language she knew. Llowfo het hse god.

Her brow wrinkled in thought. Welsh maybe? That double ll… But even as she studied the inscription, the letters began to swim on the golden surface and to rearrange themselves.

“Now really!” Esmeralda stamped her foot. “This is Too Much!”

She was about to toss the armlet back into the hole at the foot of the tree when she noticed that, though the moon was still hidden by the clouds, the Enchanted Crystal on her staff was pulsing with rainbow sparks. As she hesitated, the heavy golden arm ring twisted in her hand and, to her horror, slipped over her hand and slid up her arm to lodge above her elbow.

No amount of tugging would dislodge it. And the brachet was moving off, away from the path shown all too briefly by the moon.

Almost in tears, Esmeralda tried to return to the moon path, but the ring would not allow it, painfully tightening its grip on her arm with each step she took away from the brachet.

That’ll learn her, thought the brachet (who’d been named Jenny but preferred to be called Destiny, if she had to be called anything at all.) She wheeled about and set off through the woods.

Email ThisBlogThis!Share to TwitterShare to FacebookShare to Pinterest
Labels: Esmeralda

Yes, magic is afoot! Or paw! Simply wonderful to have a velvet cape to swirl around one!

I haven’t read fantasy for years, but this is fun. I am following Rings of Power on Prime. So far, so good.