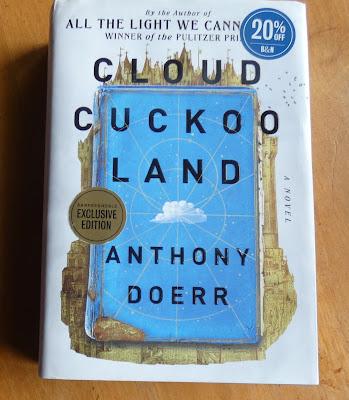 What an amazing and wonderful book!

Literary/historical/science fiction all rolled into one glorious ode to the endurance and transformative power of the written word.

Like my own Crows, there are five main characters. BUT there are multiple times and places, and it is Doerr's genius that they all intertwine into a coherent whole, tossing symbols and references back and forth like so many glittering balls.

I was captivated by the stories of all the characters and had to force myself to slow down and savor each section. I borrowed the book from a friend, but I can see I'm going to need my ow copy because I'll be re-reading it soon. VERY highly recommended.

Quoting Wikipedia: Cloud Cuckoo Land is the story of five characters spanning eight centuries. In the fifteenth-century Byzantine Empire, Anna is a young seamstress living in Constantinople, and Omeir is a village boy conscripted into the Ottoman army, as they are preparing to take the city. In the present day, Zeno, a Korean War veteran, works in a library in Idaho translating Ancient Greek texts, while Seymour, a disturbed autistic youngster, becomes caught up with a group of ecoterrorists. In the twenty-second century, Konstance is a young girl aboard the Argos, a generation starship heading for a planet called Beta Oph2.

Their stories are bound by an Ancient Greek codex entitled Cloud Cuckoo Land that each of the five characters discover and find solace in. It is a fictional book written by real Greek novelist Antonius Diogenes in the second century, and tells the story of Aethon, a shepherd on a quest to find the fabled paradise in the sky. In his travels, he is transformed into a donkey, a sea bass, and finally a crow, which allows him to fly to the gates of the city in the clouds.

I've read Doerr's other book but not sure about this one. I've never been a big fan of fantasy.

Oh I want to read this! Sounds like right up my alley!