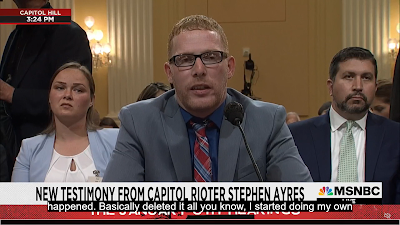 I watched all of the hearing yesterday, glued to the drama there on my laptop. The evidence is piling up and the snare is tightening. So many excellent witnesses and terrifying videos.

But I found myself focused on Stephen Ayres--family man, ordinary guy, Trump supporter, representative of so many of the easily duped who believed Trump's Big Lie and jumped on the call to "Be there! " at the Jan. 6 rally.

He wasn't a Proud Boy or an Oath Keeper. He was a sheep--following the crowd to the Capitol. And when Trump finally told the mob to go home, he went.

He says he's realized now that he was fooled by lies on social media. But he's lost his job, his house, and his life will never be the same.

I couldn't take my eyes off his wife, sitting behind him as he testified. I could certainly be wrong but watching the subtle shifting of her mouth as he spoke, led me to believe that he'll be lucky not to hear I TOLD you it was a bad idea for the rest of his life. Assuming they stay married.

I felt sorry for him. A true believer, not too bright, betrayed by his idol who is actually just a snake oil salesman, out for what he can get.

And I hope that idol meets justice at last. There is plenty of evidence.

I too watched it all. And like you said the evidence is piling up.
At the beach on Monday someone had a flag with 76 in the circle of stars. I learned yesterday what that meant. I feel so sorry for them and their ignorance and their blind adoration of someone who cares nothing for them.

I watched his wife too. Her life has also been shattered by trump and his lies. And this is playing out in many families as the FBI continues to identify and arrest rioters and prosecutors take them to court. Is trump helping any of them? Paying their legal fees? What a silly question.

It’s kind of tragic, and I suppose people can’t help being stupid, but I still find it difficult to muster sympathy.