Shout Out for a Blog Friend 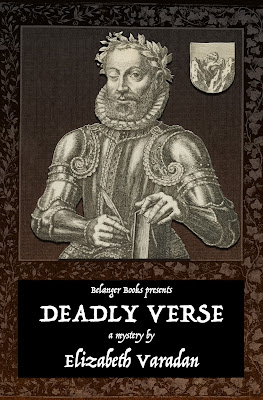 A blog friend and author has a new book coming out. I haven't read it yet so can just give you a little blurb from her blog.
"Who is this man dressed up in Renaissance garb who looks like he is winking? Luís Vaz de Camões, a Portuguese renaissance poet and some say Portugal's greatest poet, who is famous for  Os Lusíadas, his epic poem about Vasco da Gama's voyage to India.
Why does he look like he's winking? He lost an eye when, as a soldier, he fought the Moors. As was not uncommon, back in the day, he was a soldier and wrote poetry. His sonnets are considered on a par with Shakespeare's, Dante's, etc.
What does Camões have to do with a cozy mystery? Well, someone in Braga, Portugal, claims to have an original manuscript of one of his sonnets, possession of which leaves a trail of death. And, you guessed it: Carla is a suspect. "
Elizabeth's blog has shared fascinating details of her life in Portugal and I expect that her book will be equally rich. Here's a chance for a bit of armchair travel.
And here's a link to a Trailer for the new book.

A mystery of Portugal and days of yore! Sounds very interesting!

Sounds a good bit off the cozy trail, and the cover doesn't have a cat on it. 😄 Sounds like something I might enjoy.

Thanks for the lovely shout out, Vicki. Have a lovely week ahead.

I had to smile at the comment about no cats on the cover. They do make it into a lot of cozies, don't they! :-)

That's a first for me - watching an iMovie for a book. Did the publisher of your books do that?

Hi, Marcia. Yes, that was the publisher's promotional video. (I am not very techie, so I would never know how to go about creating a video with music and lettering, etc.)